On J.J. Arcega-Whiteside and the Call Back

An unlikely hero emerged late in the Eagles' 40-29 win over New Orleans on Sunday. 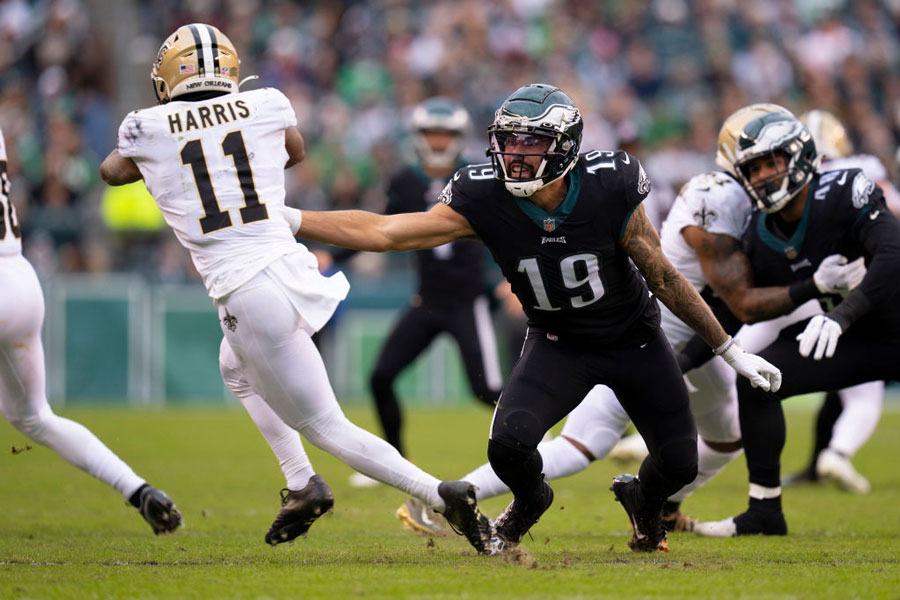 The Eagles were leaking oil.

A 33-7 laughter had turned into a 33-22 game and the hand-wringing was intensifying at Lincoln Financial Field where fans had gone nearly a calendar year since seeing a Philadelphia victory.

Both head coach Nick Sirianni and defensive coordinator Jonathan Gannon have taken their respective foots off the gas, often a cardinal sin in the modern NFL where offenses can turn from moribund to explosive in a split second.

“I got too conservative. I’ll say that right now. I’ll say it out loud,” Sirianni admitted after what turned out to be a 40-29 win, the Eagles’ first at home this season. “I got a bit conservative with the play calling that allowed them to work their way back into the game. So that’s on me.”

The players picked Sirianni up, according to the coach. Some of that was from obvious contributors like Jalen Hurts but the biggest play of all was the QB to an afterthought.

On 2nd-and-11 at the Eagles’ own 25-yard-line after yet another failed bubble screen to Jalen Reagor, an Arryn Siposs punt, and along with it, another opportunity for the Saints to further tighten the screws with over six minutes still left on the clock was just two plays away.

Sirianni went to a call back 10 weeks in the making.

Embattled receiver J.J. Arcega-Whiteside, who had not been even targeted all season, was part of Hurts’ progression and the second-year QB pulled the trigger. JJAW caught the pass over the middle and had plenty of room to run, gaining 23 yards.

Seven plays later Hurts took it in himself on a brilliant 24-yard run, his third TD run of the afternoon, and just like that the crisis was averted.

After the game, Sirianni brought up the play before he was even prompted.

“I’d also like to recognize J.J.’s play that he made in a critical time,” the coach mused. “Because I think everybody in the stadium felt, and you guys probably felt, it kind of slipping a little bit. They were coming back into the game. We needed it.”

Rewind back to Week 1 and the Eagles’ emphatic win at Atlanta and Arcega-Whiteside was lauded as an unsung hero, the blocking WR who made a steady diet of bubble screen and slip screens go.

“J.J. I thought did an excellent job of blocking [against the Falcons],” Sirianni said at the time. “He was aggressive. He was able to make some plays, kind of sprang out there for extra yards. … He’ll be rewarded with catches from that. I know he wasn’t [against Atlanta]. But we’re going to have to marry things together so he’s getting some touches off that, as well.”

The engagement to that marriage was a long one but the payoff was important.

Arcega-Whiteside has been a solid special teams player for Michael Clay and he’s continued to block well but as a former second-round pick selected ahead of Seattle star DK Metcalf but in many ways, the narrative of JJAW’s Philadelphia career has already been written by the fans.

Sirianni, however, is just trying to win games and finish an unlikely postseason run.

And the coach will use all the tools at his disposal to do that.

Had the expectations been different for Arcega-Whiteside so would his story.

“I love J.J.,” Sirianni said. “I think he embodies the toughness of this city and this football team.”