Eagles vs. Saints: By the Numbers 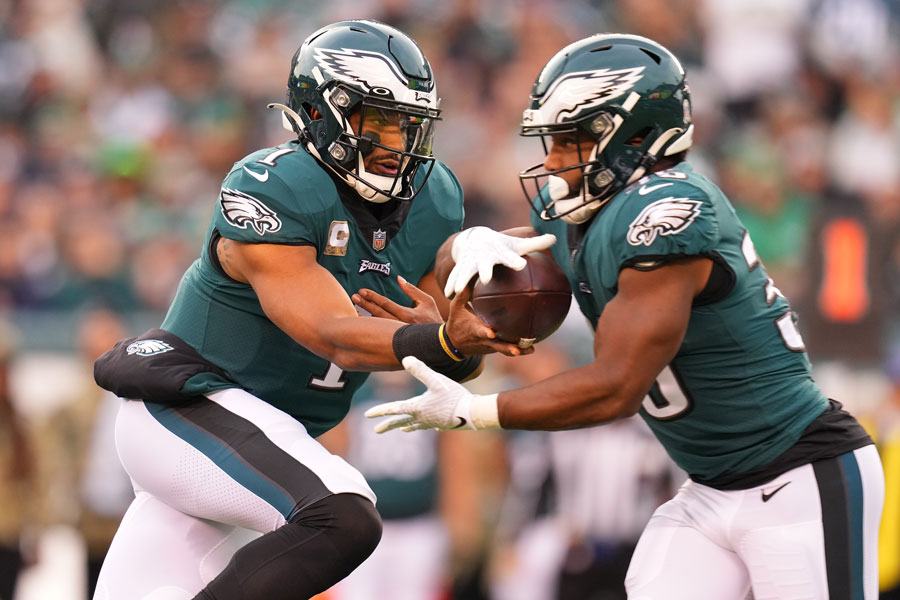 Jalen Hurts hands the ball off to Boston Scott against the Los Angeles Chargers at Lincoln Financial Field on November 07, 2021. / Photograph by Mitchell Leff / Stringer via Getty Images

Sunday’s game between the Eagles and the Saints pits the NFL’s hottest rushing attack against its best run-stopping defense.

The Eagles are third in rushing (144.3 yards per game) and fourth in rush average (5.0 yards per carry). In their last three games — wins over the Lions and Broncos and a three-point loss to the Chargers, they’ve run the ball a whopping 125 times and have averaged 208.7 yards and 14.7 rushing first downs per game.

In their first seven games, the Eagles averaged 116.7 yards and 7.1 rushing first downs per game.

Running the ball against New Orleans won’t be as easy as it’s been the last three weeks. The Saints are first in run defense (72.9 yards per game) and first in opponent rush average (3.1). They’ve given up more than 90 rushing yards in a game once this season. That was 131 in a 33-22 Week 5 win over Washington.

But the Saints are second in rushing first downs allowed (42). Only Buffalo has given up fewer (37).

The Eagles have had 45 runs of 10 or more yards in their first 10 games. Hurts has 20, Miles Sanders has 8, Jordan Howard has 6, Boston Scott has 5, and Kenny Gainwell and Jalen Reagor each have 3. Only Cleveland has more (49). But the Saints have given up a league-low 14 runs of 10-plus yards.

Hurts is the wild card in the Eagles’ ground game. He’s 11th in the league in rushing with 549 yards and fourth in rush average (5.7) among players with at least 75 carries.

That almost certainly will change Sunday. Hurts has averaged 58.6 rushing yards per game in his first 14 starts dating back to that Saints game last December. He has rushed for more than 30 yards in all 14 of his starts.

IS THE PASS DEFENSE GETTING BETTER OR ARE THE QUARTERBACKS GETTING WORSE?