Eagles vs. Broncos: By the Numbers

A look into why the Eagles’ defense is at the bottom of the league in most defensive categories. 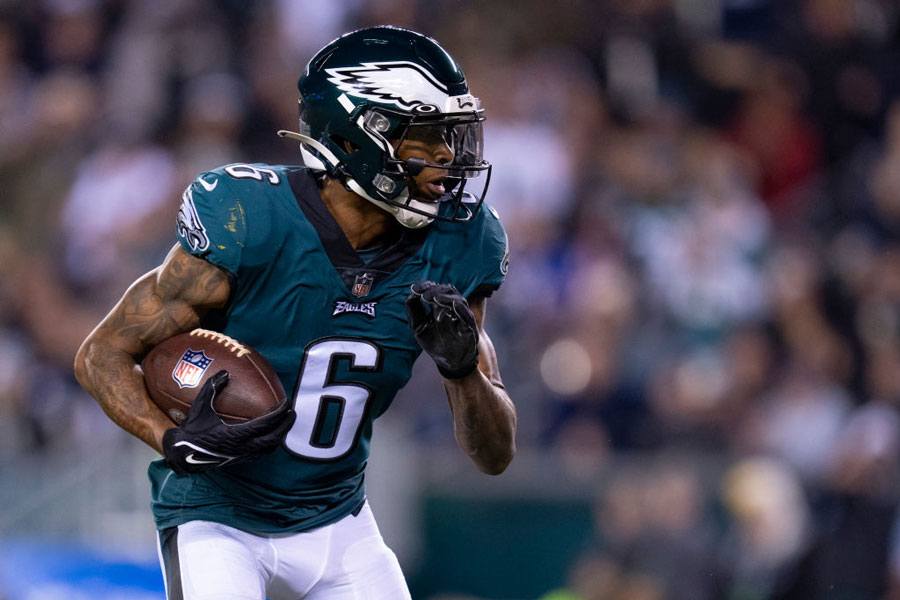 DeVonta Smith catches a pass and runs the ball against the Los Angeles Chargers at Lincoln Financial Field on November 7th. / Photograph by Mitchell Leff / Contributor via Getty Images

Several teams were interested in hiring Jonathan Gannon to be their defensive coordinator last January. For a number of reasons, some football-related and some not, he chose the Eagles.

Given the criticism he’s been taking from fans and the media the last several weeks for the defense’s poor performance and his conservative bend-but-please-please-please try-not-to-break scheme, he probably has questioned that decision a couple of times.

The Eagles are near the bottom of the league in a good many defensive categories, including first downs allowed (32nd), opponent completion percentage (also 32nd), opponent passer rating (29th), red zone defense (27th), touchdown passes allowed (25th), sacks (23rd) and the grandaddy of them all, points allowed (20th).

Even more disconcerting than the numbers, however, has been the Charmin-soft coverage the defense has played. Gannon has been intent on preventing the big play and he has accomplished that. The Eagles have given up just 20 pass plays of 20 yards or more, which is the fourth-fewest in the

But opponents have just body-punched Gannon’s defense to death underneath and scored on long drives. Thirty-three of 88 opponent possessions in the first nine games, or 37.5 percent, have been eight plays or more. Sixteen of the 26 touchdowns scored on the Eagles have been nine plays or more.

The thinking behind a bend-but-don’t-break defense is that an offense is going to make a mistake at some point along the way on a 11-12-play drive. An interception. A fumble. But the Eagles aren’t getting those. They are 24th in takeaways through nine games, with eight – six interceptions and just two fumbles. All of that summer practice at punching the ball out of the hands of ball carriers seems to have gone to waste.

Last week, the Chargers’ Justin Herbert completed 32 of 38 passes for 356 yards and two touchdowns against the Eagles. He was the fifth quarterback in the last seven games to complete 80 percent of his passes against them.

While it’s easy to blame Gannon for the Eagles’ defensive troubles, it needs to be pointed out that their defense hasn’t been good for a while now. Injuries, age, and bad personnel decisions by general manager Howie Roseman are more responsible for why the Eagles have given up 27 or more points in five of their last seven games than Gannon’s keep-the-ball-in-front-of-you scheme.

Defensive tackle Fletcher Cox, who has just one sack and has been a non-factor most of the season, is the 60th rated interior defensive lineman by Pro Football Focus. The Eagles’ other starting tackle, Javon Hargrave, is ranked 95th, despite the fact that he has six of the Eagles’ 17 sacks. But all six of Hargrave’s sacks came in the first five games. He and Cox have combined for zero sacks in the last four games. Since combining for 12 quarterback pressures in the Eagles’ Week 5 win over Carolina, Cox and Hargrave have combined for just 14 pressures in the last four games. Hargrave is rated 133rd among interior linemen against the run with a 33.2 rating. Cox is rated 63rd (57.4) against the run by PFF.

The Chargers’ three tight ends – Jared Cook, Donald Parham Jr., and Stephen Anderson – were targeted 11 times Sunday by Herbert and had 11 catches for 126 yards and two touchdowns. In the last four games, opposing tight ends have been targeted 39 times and have 36 catches for 351 yards and 4 TDs. The Eagles have given up 16 touchdown passes this season. Seven have been to tight ends.

The Eagles are 28th in third-down defense. Opponents have converted 44.1 percent of their third-down opportunities against them. That’s the Eagles’ worst third-down rate since the NFL began keeping track of third-down numbers in 1980.

Opposing quarterbacks have completed 69.1 percent of their third-down pass attempts against the Eagles, 74.1 percent in the last four games (20-for-27).

In the Eagles’ six losses, the defense has given up 15 TD passes, had just five sacks, and allowed opposing quarterbacks to complete 80.8% of their throws. In their three wins, they’ve given up just one TD pass, had 12 sacks, and a 63.2 opponent completion percentage.

The Eagles have run the ball on 85 of 119 plays the last two games. That’s a 71.4 run percentage. Their run-play percentage in the first seven games was 38.9 (164 of 421 plays). Don’t look for another 35-plus-carry game from the Eagles this week. The Broncos’ run defense is considerably better than Detroit’s and LA’s, which means the Eagles are going to have to throw the ball more than the 17 times they did last week or the 16 times they did the week before against the Lions.

With the run being such a big part of their offensive game plan the last two weeks, the Eagles used 13P (1RB, 3TE, 1WR) 22 times against the Lions and Chargers. That’s two more times than they used 13P in the first seven games combined. Nineteen of those 22 plays with 13P were run plays.

The Eagles ran two screens Sunday against the Chargers. The first one, to Quez Watkins, gained just two yards. The second one, to Jalen Reagor, lost six yards. Through nine games, the Eagles have run 37 screens. They’ve gained 233 yards with them. But 221 of those yards came on 22 screens in the first four games. In the last five games, they’ve gained just 12 yards on 15 screens.

Jalen Reagor has 21 catches this season. Nine have been screens that have gained a total of 43 yards.

Hurts is fourth in the NFL in rushing first downs with 35, behind only the Titans’ Derrick Henry and the Colts Jonathan Taylor (both with 49) and the Ravens’ Lamar Jackson (39). He’s third in rush average (6.0), tied for seventh in rushing touchdowns (5) and 13th in rushing yards (494),