The Birds' defense is making things too easy for opposing quarterbacks. 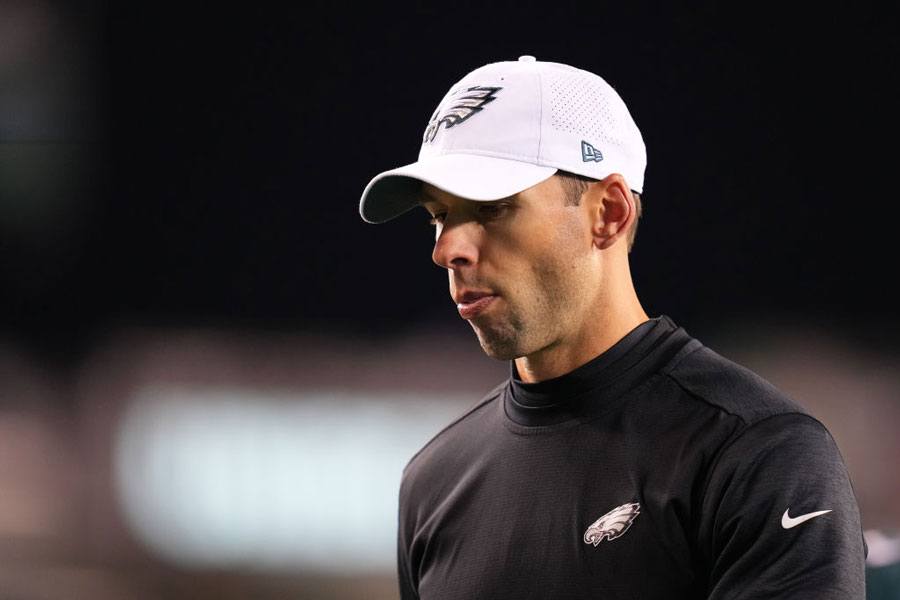 Jonathan Gannon walks off the field after a loss against the Los Angeles Chargers at Lincoln Financial Field on November 07, 2021. / Photograph by Mitchell Leff / Stringer via Getty Images

Members of the Eagles’ fan base have taken aim at Nick Sirianni following some difficult, emotional losses. A thrown jersey in Las Vegas was later trumped by a floral arrangement landing over the angry head coach’s shoulder as he exited stage left from Lincoln Financial Field after a difficult 27-24 loss to the Los Angeles Chargers this past Sunday.

As Nick Sirianni left the field, a fan threw a bouquet of flowers at him! Sirianni was understandably NOT happy #Eagles @6abc pic.twitter.com/9X40lA4eRJ

The more consistent frenzy, however, has been saved for defensive coordinator Jonathan Gannon, whose unit allowed the fifth quarterback in nine games — the Chargers’ Justin Herbert — to complete at least 80 percent of his passes. Herbert completed 32-of-38 passes against the Eagles for 356 yards and two touchdowns with a gaudy 123.2 passer rating.

Over the prior 70 years — you read that right, seven decades of Eagles football — just six quarterbacks completed better than 80 percent of their throws. Even the context that it’s never been easier to throw the ball in the NFL doesn’t explain what’s going on with the Eagles’ defense.

A game-tying fourth-quarter drive against by Jalen Hurts and co., arguably the offense’s best of the entire season, was footnoted when the passive, zone-heavy Philadelphia defense allowed the Chargers to match it while siphoning all but two seconds off the clock in a setback that dropped the Eagles to 3-6 on the season and a dismal 0-4 on the road.

Gannon, a rookie DC with a big reputation coming in, might be a problem, but he’s not the problem.

That’s the personnel and it’s an issue that’s been exacerbated by years of ignoring what has become the lesser side of the football in the modern NFL.

The last defensive player the Eagles selected in the first round of the draft was the disappointing Derek Barnett in 2017. Before that, you have to rewind to Marcus Smith, a bust while toggling between linebacker and edge rusher, in 2014. The last difference-maker chosen was Fletcher Cox in 2012, now a descending player unhappy in the move from Jim Schwartz’s aggressive mindset to Gannon’s more structured one.

There have been more misses than hits in the other premium rounds with cornerbacks like Sidney Jones and Rasul Douglas serving as deductions on Howie Roseman’s ledger while the hits from the organization go back to different eras like Jordan Hicks in 2015.

That’s forced the Eagles to go outside the organization for cornerbacks like Darius Slay and Steve Nelson, or linebackers that have been less-than-stellar, the latest being the recently released Eric Wilson.

There have been some success stories, though, like Avonte Maddox, who is having his best career season now that he’s finally gotten the opportunity to settle into the slot position, and recently promoted LB T.J. Edwards, who has shown an impressive football IQ and some much-needed toughness over the past two weeks.

As an offensive coach, Sirianni explained how defenses have affected him and his own QBs over the years.

Gannon noted that QBs have been getting the football out very quickly against the Eagles this season, something the DC attributed to two things: what has been a vastly overrated front, along with Philadelphia’s goal of taking away explosive passing plays.

The goals moving forward are obvious. Accomplishing them is easier said than done, however.

“To get the quarterback to hold it in this quick game when it really comes down to that quick game and two seconds out before the ball — with him having the ball and getting out in two seconds, it’s the disruption from the secondary,” Sirianni said. “It’s hard because if they’re getting it out in two seconds, the pass rush isn’t going to get there, right? So, it’s the disruption in the secondary, whether it’s cover two with some reroutes, whether it’s a different type of zone with reroutes or the press man to man out there that deters that thing from getting out that quick.”

Whether they know it or now fans don’t judge play-calling or schemes, they react to results and that’s about the execution from the talent on hand. The greater the talent the easier it is to execute sound defensive schemes.

The original Eagles plan was for a dominating front to mask certain deficiencies in the back seven. Until Cox, Barnett, Javon Hargrave and Josh Sweat start to play like they were expected to, the defensive struggles will continue.