How the Evolution of Nick Sirianni Took Off With the Chargers

Nick Sirianni’s journey to becoming an NFL head coach was kickstarted in San Diego with the Eagles’ next opponent, the now-Los Angeles Chargers. 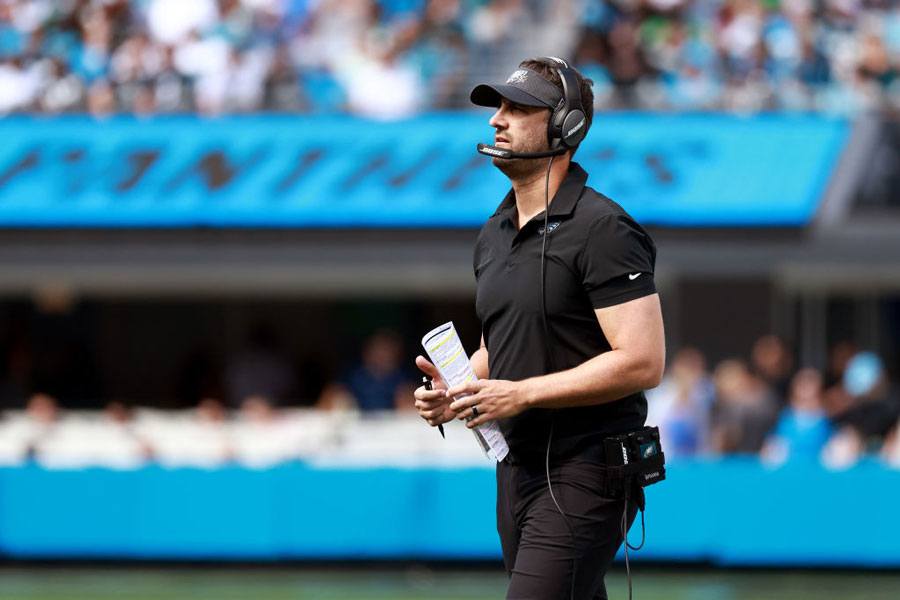 Nick Sirianni watches his team play against the Carolina Panthers during their game at Bank of America Stadium on October 10th. / Photograph by Grant Halverson / Contributor via Getty Images

Nick Sirianni has immense respect for Philip Rivers, the nine-time Pro Bowl quarterback who retired after 17 NFL seasons back in January.

The first-year Eagles head coach got to know Rivers back in San Diego where he spent two years as Rivers’ position coach in 2014-15.

The two were then reunited in 2020 for what turned out to be Rivers’ final professional season with Indianapolis when Sirianni was the offensive coordinator under Frank Reich, a relationship also forged in Southern California.

While Sirianni was supposed to be tutoring Rivers with the Chargers, in many ways it was the other way around. Already an 11-year veteran at the time Sirianni took charge of the Chargers’ QB room, Rivers was the guy sharpening up Sirianni as the latter’s coaching career progressed.

“Being around a player like Philip Rivers, you got to come with your A-game as a coach every single day because there is not too many things that that guy hasn’t seen,” Sirianni said Monday, a day after his most impressive win as a head coach to date, a 44-6 rout of the 0-8 Lions in Detroit on Sunday. “When I became the quarterback coach [with the Chargers] I had to dig and claw and scratch to give [Rivers] a nugget that he might not have seen, because, again, this guy would see everything.”

The subject came up because the now-Los Angeles Chargers are next up for the 3-5 Eagles at Lincoln Financial Field on Sunday.

Sirianni was an NFL assistant for four years in Kansas City, placing his foot in the NFL door with the help of former Chiefs coach Todd Haley. Sirianni’s coaching career really took off when he moved to the Chargers, first as a quality control coach and then being promoted to QB coach and finally shifted to WR coach, his default expertise as a former college receiver.

It was with the Chargers where Sirianni also developed his relationship with Reich, who was Rivers’ QB coach in 2013 before being promoted to offensive coordinator, a domino that pushed Sirianni from QC to the QB coach.

By 2016 Reich was fired and off to Philadelphia while Sirianni moved to WR coach on the reshuffled Chargers staff. The two then reunited in Indy when Reich got the top job there after winning Super Bowl LII as Doug Pederson’s OC with the Eagles.

The NFL has always been about relationships and perhaps the two most important ones (Rivers and Reich) that got Sirianni to the finish line of his own career goals were started with the Chargers.

“When we were there in offense and Frank, our staff, we kind of developed the system that we had there,” Sirianni explained. “Then when Frank became the coordinator and I became the quarterback coach, obviously it was really big for my development that we were doing some of the things passing that — we were a better passing team there than running team.

“We found some things fundamentally that we liked, some ways we attacked the defenses together. Obviously, that bridged itself into Frank and I reconnecting in Indianapolis, which gave me the opportunity to have some success there to be here. So obviously that was a big development part in my coaching.”

Shane Steichen, Sirianni’s current OC with the Eagles, was next in line with the Chargers, a step below Sirianni, starting out in QC and then moving to QB coach and finally OC after Sirianni has moved on to the Colts.

“That’s my same thought here [with Steichen]. Shane went — I went and got with Frank, back with Frank, and, again, I knew how our system evolved and I know Shane did the same thing when I left.”

Evolution is key, according to Sirianni.

And it all started in San Diego with the Chargers being the launch point for Reich, Sirianni and Steichen.

“I just think I really grew as a football coach there and some of the good coaches we had there,” Sirianni assessed.