The veteran Eagles center explained how Sixers star Ben Simmons should have chosen to write his own narrative. 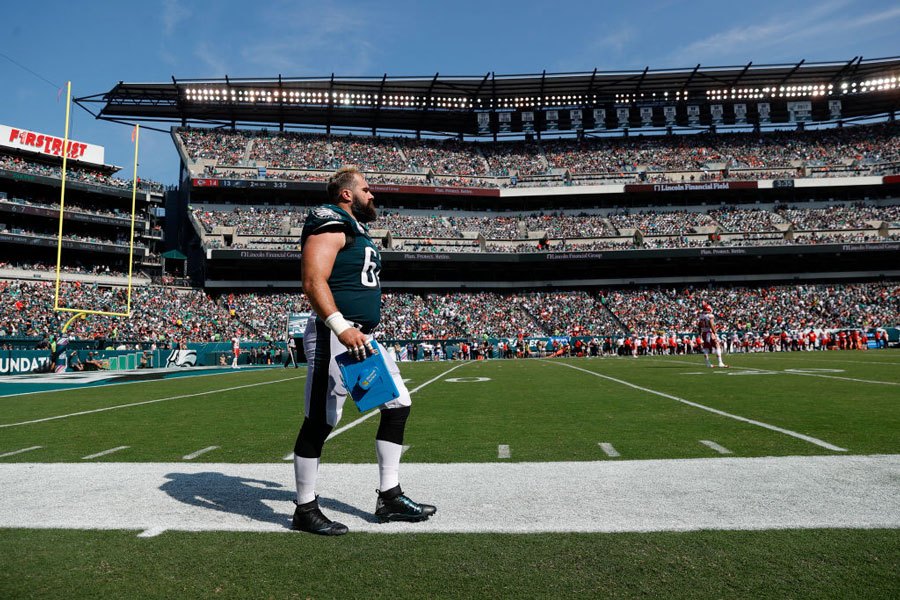 It’s tough to get behind anyone in the messy, impending divorce between Ben Simmons and the Philadelphia 76ers.

Simmons might be the most entitled “superstar” in city history, and the Sixers, who played a starring role in that entitlement by enabling the behavior with the kid-glove treatment for years, are threatening the prime of Joel Embiid by refusing to admit a mistake and cutting bait.

Leaks have now accused Simmons of trying to fake COVID-19 to avoid Game 7 against Atlanta back in June and now you have the whispers of the 25 year old feigning back injury and even mental illness, a particularly brassy move considering the Eagles’ Lane Johnson recently had to leave his team for multiple weeks while dealing with a serious bout of depression and anxiety.

In pro wrestling parlance Simmons vs. the Sixers is heel vs. heel.

The babyface, though, showed up in South Philadelphia on Thursday in the midst of growing out his blonde hair. The only thing missing was the Mummer’s outfit.

Jason Kelce is everything Simmons isn’t. A kid from the Cleveland suburbs who’s turned into a Philly institution.

Despite 11 NFL seasons on his resume, an ongoing franchise record of 111 consecutive starts at center, a Super Bowl LII championship ring, millions of dollars, and a potential legacy that lands right back in Ohio, just an hour south in Canton, Kelce has kept his everyman persona because he’s still exactly that everyman.

Before practice, Kelce decided to take on those who portray his adopted home as a difficult place to play just as his friend and now former teammate Zach Ertz did on his way out the door to Arizona.

“There are a lot of people who say it’s a hard place to play. I think it’s [expletive] easy, to be honest with you,” the outspoken All-Pro said. “You just go out there and play hard. You want to be loved in this city as a baseball player? Run to first base. They’re going to [expletive] love you. That’s what it comes down to. If you go up here and make a bunch of excuses, and if you come up here and try to lie to them and act like they don’t know what they’re talking about — which sometimes they don’t — when you act that way, or when you aren’t accountable if you’re making mistakes, or not getting better or anything like that, they’re going to crush you.”

If it seemed like Kelce was speaking directly to Simmons, he wasn’t. But that was the most obvious comparison he could make at the moment.

“What’s going on with the 76ers and Ben Simmons and stuff like that, all that is because of a lack of accountability, a lack of owning up to mistakes, and a lack to correcting things,” Kelce noted. “If all that got corrected, if you’re fixing free throws, if you’re getting better as a player none of this is happening.”

“Everybody can bitch and complain about how tough this city is to play in. Just play better, man. This city will love you.”

Both Ertz and Kelce took their own shots from the Philly faithful over the years but didn’t retreat from the criticism even if it was unfair at times.

“Usually, it’s not a big deal,” Kelce said of the criticism. “The reality is the stuff that hurts players or hurts guys the most is when it is true. Somebody’s up there saying a bunch of stuff you don’t believe yourself so you don’t get upset about it. You just say this guy doesn’t know what he’s talking about so you just brush it off. Usually, the stuff that tears apart organizations, tears apart players mentally is because it is true and you can’t wrestle with the fact that it’s true or how to correct it so you lash out and blame other people.”

For Kelce, passion is a prerequisite to enjoying his job as a professional athlete.

“If you fight, even if you’re struggling, if you’re fighting and really trying, they’re still going to respect you,” Kelce said of the city’s fans. “That’s what I think most guys miss. I really don’t think this is a hard place to play at all. I think a hard place to play is … I think it would be miserable to play in a place like Jacksonville where nobody cares.”

Kelce might want to take that one back after former teammate Clay Harbor, who played with the Jags from 2013 to 2015, and the Mayor of Jacksonville chimed in, although it’s hard to argue in a credible way that the passion on the First Coast is there for anyone other than the University of Florida.

Dude takes an unsolicited dump on a million people. We love our city and support our team. Before you take another uneducated cheap shot spend some time here. People love this place. And total respect for Philly fan base and the city. I’ve always enjoyed my visits. #DUUUVAL https://t.co/jvqSJWfOBA

According to Kelce, the success stories in Philadelphia regard negativity as “a blip in time” en route to a controlled destiny.

“Over the course of my career, I write the narrative,” Kelce explained.

“You think about it like ‘if I just do this better, if I go out and ball, if I go out there and play really well nobody, is going to have any choice but to love me or appreciate me as a player,’” he said. “So that’s what I tell guys. You write your own narrative.”

John McMullen covers the NFL and the Eagles for Sports Illustrated and JAKIB Media. He’s also the co-host of “Birds 365,” a daily streaming show covering the Eagles and the NFL and the host of “Extending the Play” on AM1490 in South Jersey. You can reach him at jmcmullen44@gmail.com or follow John on Twitter: @JFMcMullen.