The Eagles All-Pro right tackle is back — and this time his teammates were providing the protection. 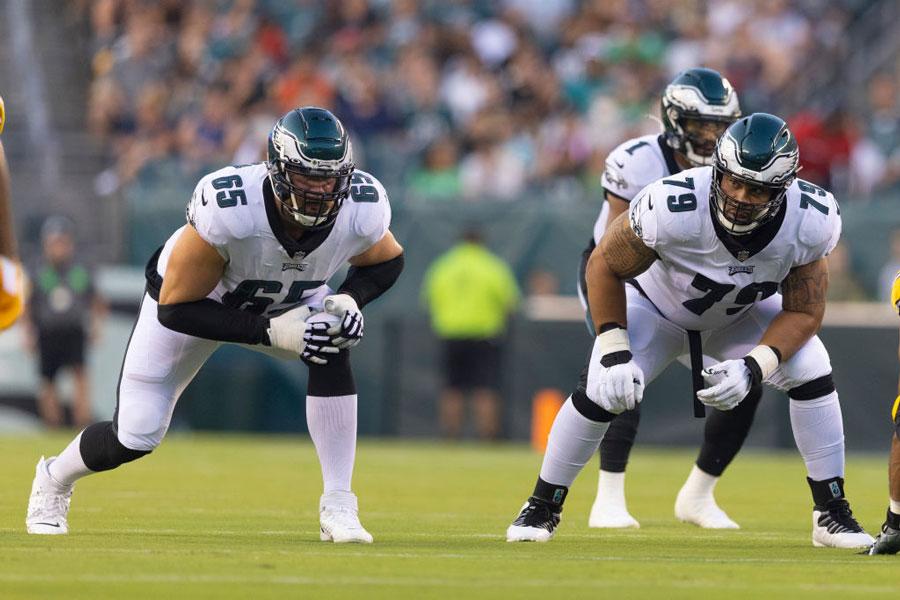 Lane Johnson #65 and Brandon Brooks #79 of the Philadelphia Eagles in action against the Pittsburgh Steelers during a preseason game at Lincoln Financial Field on August 12th. / Photograph by Mitchell Leff / Stringer via Getty Images

Lane Johnson was back at practice Wednesday for the first time since the Eagles’ veteran right tackle had to press pause for three weeks due to anxiety and depression he’d kept away from even his family and friends.

One of the Eagles’ more popular players, Johnson was welcomed back with open arms. The No. 65 sticker, a gesture to keep Johnson close while he was away from the team, was removed from Nick Sirianni’s visor.

“We all have real-life problems,” Eagles Pro Bowl defensive tackle Fletcher Cox said when asked about Johnson’s return. “We’re all human. I think sometimes people don’t realize. They think that we’re bulletproof. That’s the funny part about it, but we all have his back and look forward to seeing No. 65 on Sunday.”

Sirianni mentioned that Johnson’s issues could potentially help other players who are struggling with their mental health.

“I think we’re always aware of definitely mental health and issues like that, just with the doctors that we have, with the trainers we have, with the people in the building here associated with mental health, too,” Sirianni explained. “Because we know that’s an issue in our society right now, and we want to make sure we have the resources needed for our players for everything, not just on the field, but off the field as well.”

As far as the football part of it goes, Sirianni wasn’t willing to go as far as Cox when talking about Johnson’s status against the Las Vegas Raiders this week, starting Johnson back in a limited fashion.

That said, in the small portion of the practice session open to the media, Johnson was working in individual drills at his familiar RT position and Jordan Mailata was back on the left side. Mailata said that he is practicing on both sides in case he has to stay at right tackle.

A look at Lane Johnson back at practice. #Eagles pic.twitter.com/LdWzvWLl86

“I’m just preparing to do whatever it takes for the team,” Mailata said. “Preparing both sides, so whatever happens on game day happens, but we’re making sure we cover all bases.”

Before his absence, Johnson was dealing with some swelling in his ankle — a chronic problem that required two surgeries last year — but the veteran’s ramp-up period is not complicated by the injury issue, according to the head coach.

“We’re taking [his status] day by day,” said Sirianni. “Just really excited that he’s back in the building, back with his teammates, and just super excited to see his face every day.”

Johnson was a surprise late scratch against the Kansas City Chiefs on October 3rd and had been away from the NovaCare Complex for a bit. He announced his return on Monday morning via social media but did not speak to the media on Wednesday.

Others did speak about Johnson’s return.

“It’s bloody great to have Lane back,” Mailata gushed. “He just brings this morale booster. It’s needed, especially how we’re going right now. I think just having Lane back, just having our brother back, man, means a lot to us, especially as an O-line, but also from a whole team perspective. Definitely that morale booster. Everybody is missing him, glad we have him back and he’s doing well.”

“I have so much respect for Lane. Knowing that everybody deals with something, I’m happy to see him back and OK,” Hurts said. “As a leader on the team, how do you handle when someone goes through a situation like that? You be supportive. Be supportive and give respect where it’s deserved. For a guy like Lane, everybody goes through something. So, me being a friend of his, I just want to be there for him and I’m happy that he’s OK and he’s back.”

John McMullen covers the NFL and the Eagles for Sports Illustrated and JAKIB Media. He’s also the co-host of “Birds 365,” a daily streaming show covering the Eagles and the NFL and the host of “Extending the Play” on AM1490 in South Jersey. You can reach him at jmcmullen44@gmail.com or follow John on Twitter: @JFMcMullen.