How the Buccaneers Stopped the Steal in Win Over the Eagles

The Eagles were dominated Thursday night, but they did have an opportunity to steal the game. 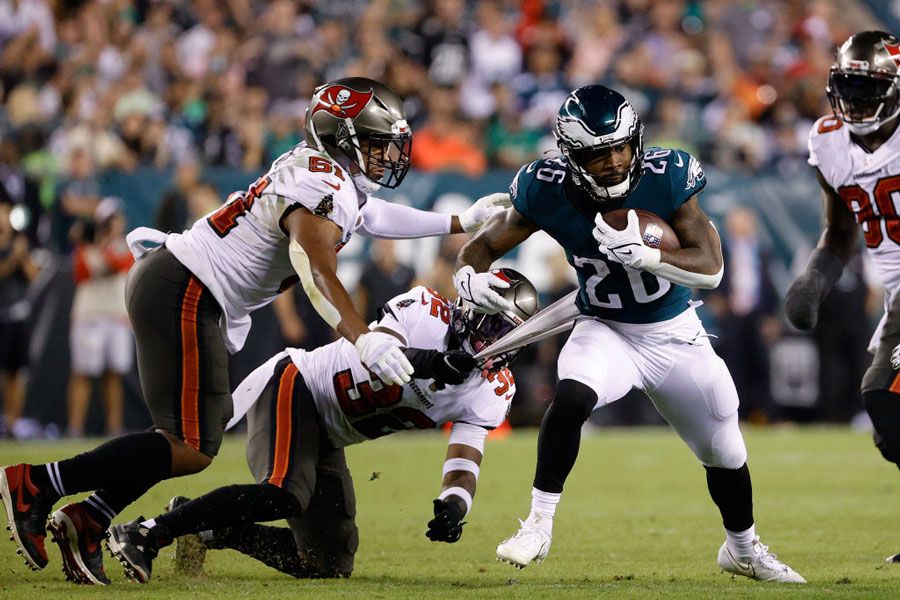 For the second time in four days, the Eagles had an opportunity to steal a football game they had no business being in. A toxic cocktail of hubris and passivity had turned a 28-7 laugher by Tampa Bay into a 28-22 game late in the fourth quarter on Thursday night, when Tom Brady and Co. faced a 3rd-and-7 from the Eagles 45-yard line with 3:24 left in the game.

Forcing a punt in that situation would have given Philadelphia an opportunity to steal a game the stat sheet framed as lopsided, albeit by driving a long field with few signs the passing game was about to pick up.

Instead, Brady found Antonio Brown for a 27-yard gain, and it was victory formation from there as the Eagles fell to 2-4 on the season and the chatter quickly picked up around Nick Sirianni’s play-calling and Jalen Hurts’ ineffectiveness.

“We had a double on [Brown],” veteran safety Rodney McLeod noted when discussing the play that essentially sealed things for the 5-1 Bucs. “We went into the game and said we have that in our back pocket if we need to use it. We felt that it was a great time in that moment. Tom [Brady] had been connecting with him pretty often and we felt as though we need to take him away. Myself and Marcus Epps were on him on that play. He just made an amazing play honestly.”

The Eagles had used very little dime defense this season, to the point that Jonathan Gannon noted “we are not a dime defense right now.”

“Right now” did come in the biggest moment against the Bucs, when Gannon went “Big Nickel,” adding Epps to veteran safties McLeod and Anthony Harris, along with the three starting cornerbacks: Darius Slay, Steve Nelson, and Avonte Maddox.

“Obviously [Brady] got outside of the pocket and threw it, and great catch. But [they’re] two great players, and they have a great connection,” McLeod said. “But myself, I have to do better on that play, and put us in position to get a stop right there and give our offense a chance to win the game.”

Playing Brady and the Bucs is often a pick-your-poison dilemma. The reigning Super Bowl champions have three great receivers in Mike Evans, Chris Godwin, and Brown, but the Eagles were honed in on the latter, based on film study and Tampa Bay’s predilections as an offense.

“They have great talent,” McLeod said. “All three receivers are very capable of taking over the game, but that was more specific to third down. Based on the stats, Antonio Brown was [Brady’s] favorite target on third down, so [the defense called was] something that if we needed it we could use it. Like I said, we thought it was a great time, and they just made a better play.”

The offense probably didn’t deserve the chance to pull off another miracle — considering it amassed 213 total yards compared to the Bucs’ 399 — but much like Carolina last Sunday, the steal was in reach even if the margin of error was very small. And the defense was pointing the finger in the mirror when the final gun sounded.

“We battled, but it’s still not good enough,” said Maddox. “They had a good amount of passing yards, a good amount of rushing yards. We have to get off the field a couple more times than we did.”