Anatomy of a Short Week: Nick Sirianni Has No Regrets 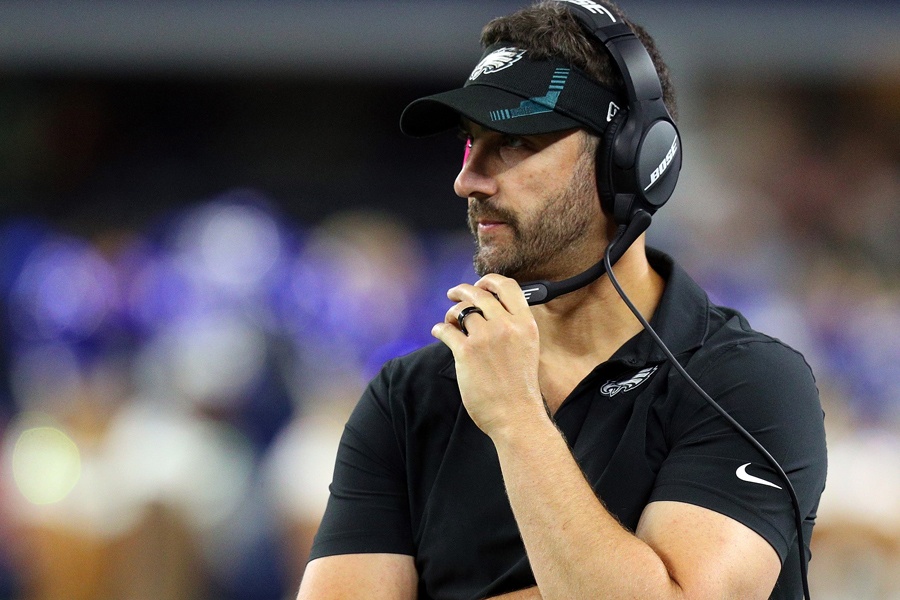 Nick Sirianni has no regrets from this Eagles short week going into Thursday’s game. Photograph by Richard Rodriguez/Getty Images

Nick Sirianni understood he wasn’t going to have much time to prepare for the Tampa Bay Buccaneers on a short week, so the rookie head coach had some of his assistants starting on the reigning Super Bowl champions before things were even kicked off in Charlotte last Sunday.

“The coaches that weren’t calling the [Carolina] game, they did planning – they did a lot of work beforehand,” the Eagles rookie head coach explained Wednesday morning. “I won’t say a lot, but they had a big chunk of it done beforehand to be able to prep me and show me some things to catch me up.”

Once the Eagles completed an improbable 21-18 comeback win over the Panthers, it was off to the airport and back to Philadelphia. The 24-hour rule was suspended — or at least scaled back — to 12 hours, and the players had no victory Monday. Instead, they were on the field at the NovaCare Complex for a walkthrough to get ready for Bruce Arians, Tom Brady, and the Bucs.

If that seems quick, understand Sirianni and a core group of his coaching staff had a head start in the coach’s house watching Sunday Night Football and putting together the skeleton of the game plan you’ll see on Thursday night.

“It started, to be truthfully honest with you, it started with Sunday night at my house with some coaches coming over,” said Sirianni. “When we landed — my kids were already asleep — I brought some of the coaches over to my house, kind of like in that old high school football thing, like, ‘Hey, come over to my house, let’s go and let’s start planning a little bit.’”

When you’re having fun it’s not work, and Sirianni, who comes from a football-coaching family, is extremely close with his staff, particularly offensive coordinator Shane Steichen and passing game coordinator Kevin Patullo.

“It was kind of cool because that first part — definitely that Sunday was cool, because it reminded me of coaches coming over to my dad’s house or my parents’ house when I was a kid to game plan on that Saturday after a Friday night win,” Sirianni said. “My brother, in college, does a little of that, too. On Sundays, he’ll bring some of the coaches over to his house on Sundays to prep. So it was finally my opportunity to do that. And I kind of thought that was cool.”

Sirianni did forget the snacks, however.

“I didn’t get any pizzas,” Sirianni said, smiling. “I think Shane might have had some Cheez-Its that were left over from my son’s lunch.”

A good coach learns from his mistakes moving forward.

“I’m going to put that on our schedule to make sure next time we have the pizzas ready, whatever the beverage of choice is for the guys, we have all that ready, as well,” Sirianni said. “And so, I’ve done it a couple different ways. We did it one year in Indy where we stayed — we played a home game — we, obviously, were away.

Having a good time wasn’t the goal, though. Prepping for what could be the best team in football was, and Sirianni has everything at his disposal at his home when it comes to the film.

“They set us up pretty good at our homes, they really do. The video department, led by [Eagles Vice President of Football Technology] Pat Dolan, has us all set up at the house. So, we had everything we needed there,” the coach explained.

The final exam is Thursday night, and Sirianni seems to have no regrets when it comes to his first short week as an NFL head coach.

“I know it’s my first time as a head coach doing it, but it’s clearly not our first time since we’ve been in the NFL,” Sirianni noted. “Just like when you develop your coaching philosophy, you take things from the past of what you have done, and you twist it and tweak it the way you want it. So, I’ve been in some good places where we had good plans for Thursday night and the preparation felt right as an offensive coordinator. The preparation felt right, and we kind of followed that mode with making slight adjustments. And so I feel really good about the preparation that we did and the situations we put ourselves in through the week.”