The second-year offensive lineman is able to short from guard to tackle at a moment’s notice. 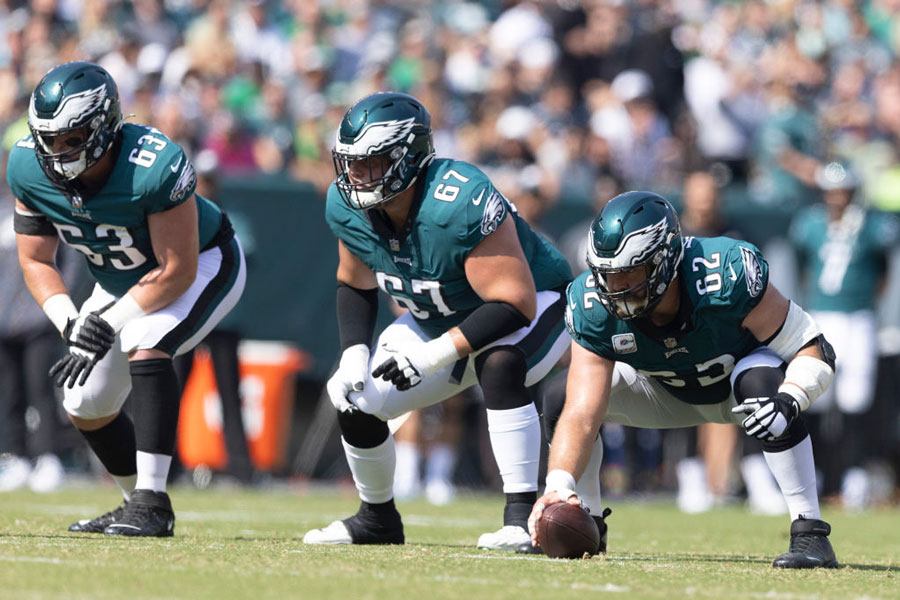 Jack Driscoll is starting somewhere in Charlotte on Sunday.

The Eagles’ second-year offensive lineman is coming off a game in which he practiced to play right guard and was kicked out to right tackle when Lane Johnson was a late scratch due to a personal issue.

The musical chairs on the offensive line figure to continue this week against the Carolina Panthers, with the curveballs being Johnson’s status (he’s unlikely to play against the 3-1 Panthers) and the health of Jordan Mailata, typically the starter at left tackle who has missed the past two games with a knee sprain and has been back at practice in a limited fashion while wearing a bulky brace on his right knee.

Because of all the uncertainty, the Eagles have plenty of contingency plans. But according to a team source, the organization is preparing as if Johnson will not play for a second consecutive week, and Plan A (from left to right) in that scenario is Andre Dillard, Landon Dickerson, Jason Kelce, Driscoll and Mailata.

If Mailata doesn’t get the green light from the medical staff, Driscoll would again kick out to RT and Nate Herbig would be inserted at RG.

And if your head is swimming after reading that, the music stops there so grab a chair at least until the next injury, when Brett Toth or even a Le’Raven Clark could get involved in things.

Head coach Nick Sirianni is playing up the competitive-advantage card and doesn’t want to give away too much in advance of Sunday’s game but Matt Rhule, the former Temple coach who is now in charge of the Panthers, and his defensive coordinator, Phil Snow, understand Driscoll will be one on the players trying to block their front whether it’s inside or outside.

“It’s part of my job to be able to play wherever [the Eagles] tell me, whether it’s on short notice, or it’s all week that I’m repping at right tackle, or two hours before the game,” Driscoll said before Wednesday’s practice.

Jack Driscoll on his late move back to RT Sunday. #Eagles pic.twitter.com/bp5AjhlP9e

Last week the notice of a positional switch came with two hours notice.

And there are rarely any kid gloves with the gruff Stoutland, perhaps the Eagles’ most accomplished assistant coach and one of the most well-regarded OL mentors in the NFL.

“There’s not much fluff with Stout,” Driscoll explained. “It’s really, ‘You’re starting at right tackle. Go out there and play well,’ and I’m like, ‘Alright.’”

Driscoll is actually a natural right tackle, the position he played in college at Auburn before being drafted by the Eagles in the fourth round of the 2020 draft.

“That’s what Stout said, ‘Look, you’ve played right tackle for most of your time here and in college,’” Driscoll noted. “For me, it was just kind of getting the first couple of sets down. A few plays and it’s like, ‘I’ve done this a lot. This is the position I’m most comfortable at.’ … I just needed a couple reps and a couple of sets, and I felt comfortable being back out there again.”

If that changes, Driscoll is also comfortable sliding inside where the action gets on you much faster as an interior blocker.

“I feel comfortable at guard, because up until two hours before the game, I thought I was starting at guard,” he said. “It’s like I got all my reps at practice next to Kelce at guard. At guard, things just happen quicker. It’s right there. It’s on you right away, but I always think I can take some things from tackle to guard to help me, and vice versa when I go to tackle.”

Versatility is the greatest attribute a backup offensive lineman can have in the NFL and Driscoll, who missed the Eagles’ first three games on injured reserve with a strained pec, is proving to be a malleable player who quickly accepts the thought of moving parts and even finds some advantages to playing at different spots.

“I always feel that being able to play both [guard and tackle] kind of gives you a better understanding of the whole O-line, the blocking schemes,” said Driscoll. “It helps you hone in on your technique to be able to play anywhere.”

Driscoll was first thrown into the fire in his professional debut when Johnson’s troublesome ankle flared up on the trio down to play Washington in the 2020 season opener.

“Just focusing on my technique, no matter who is across from me. Control what I can control and play my hardest, and do what I can to help the team win.”

This week, Driscoll will be out there against the Panthers. He’s just waiting to find out where.

“I’m sure Coach Stout later in the week will let me know for sure which one,” Driscoll said. “Same thing, I’ll be ready for either one and go out there and do what I can.”