Eagles special teams coordinator Michael Clay went in-depth on how a moment of understanding helped the Eagles against Kansas City. 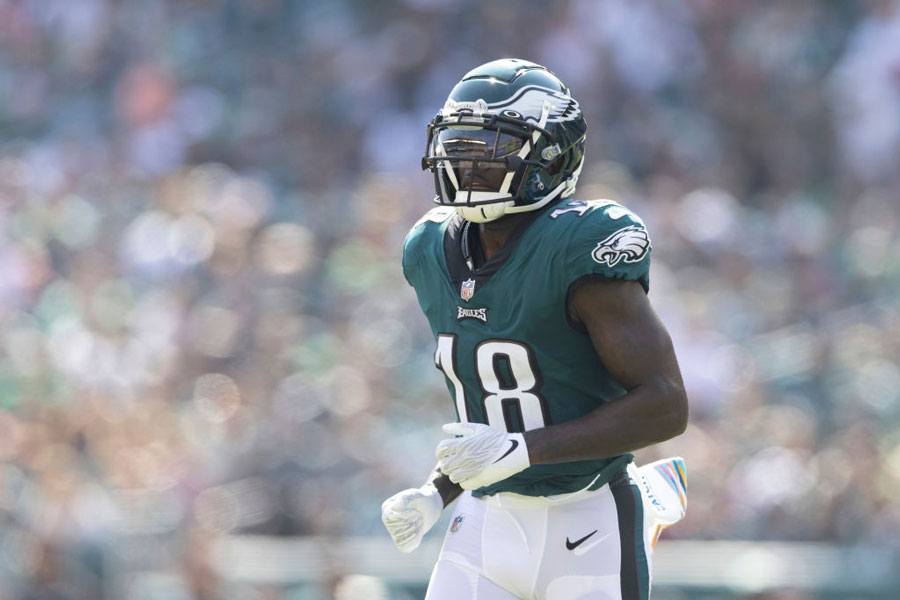 Jalen Reagor on the field against the Kansas City Chiefs at Lincoln Financial Field on October 3rd. / Photograph by Mitchell Leff / Contributor via Getty Images

Kansas City’s Darrel Williams had just plunged in from a yard out, and the Chiefs led the Eagles 28-16 with under a minute to go in the third quarter of what turned out to be a 42-30 win for Andy Reid’s ever-so explosive team Sunday.

Philadelphia was reeling and needed a boost. They got it from Jalen Reagor, the second-year receiver who brought back the ensuing kickoff 44 yards. The big return handed Jalen Hurts and Co. a short field to work with and the offense ultimately cashed in with a Kenny Gainwell seven-yard TD run, keeping the Eagles in the game a bit longer.

Ultimately the defense just couldn’t hold up against Patrick Mahomes and Tyreek Hill, but staying competitive into the final quarter was a bit of a moral victory for Philadelphia, even if no one around the NovaCare Complex wanted to admit it.

Reagor’s kickoff return was the first of the season for him, and it seemed to be a shift due to a lack of production from Quez Watkins, who muffed the prior KO return opportunity before getting the football back. In five returns this season, Watkins is bringing them back at a poor 14.8 rate with a long of 22.

According to special teams coordinator Michael Clay, there was more to the change than just ineffectiveness from Watkins, explaining a “cool experience” watching the two friends understand innately that a shift was needed.

“You saw Quez kind of went down late in the first half. And it was actually a cool experience between those two receivers,” Clay explained at the NovaCare Complex on Tuesday. “I mean, like I’ve been telling you guys, we keep all the returners ready for whatever happens. [Watkins] got banged up and Jalen came up to me and said, ‘Hey, I see Quez is kind of banged up. I’ll take this. Just take a load off his plate.’”

Reagor understood Watkins was hurting and essentially raised his hand before producing.

“When you have guys like that that want to help each other out for the betterment of the team, it’s awesome,” Clay said. “Jalen saw his moment and 44 yards later, he took it. So, it was a cool moment to see two young guys, not a veteran, two young guys having each other’s back for the betterment of the team. And it helped us get closer in that game.”

“We set up a nice little scoring drive. Easy for an offense that’s kind of gelling, to go 56 yards with a big return like that. Hopefully, we can keep that thing going for the rest of the year.”

Clay also noted that opposing teams, starting with the Carolina Panthers this Sunday, need to be aware of who may be deep.

“Opposing teams have to wonder who’s back there, which is great for us,” Clay noted. “But they both have been doing phenomenal jobs for us. And once again, it takes — in that instance, it took all 10 for Jalen to get that big return.”

With any successful kick return, it’s about more than the playmaker carrying the football.

“There were great blocks on the front side by two young guys, [LB] Patrick [Johnson] and [CB] Zech [McPhearson]. The backside with veteran guys. They communicated, ‘Hey, I’m going to take this guy, you take that guy,’ with [LB] TJ [Edwards] and [LB] Alex [Singleton] and [DB] Andre [Chachere],” Clay said. “It was just a lane that hit, and he hit it, and 44 yards later, it was really good for us.”

Moving forward, Reagor may be the better option as the kick returner because he has the more powerful lower body. Clay sees positives from both Watkins and Regor as the KR, however.

“Quez, at Southern Miss, was a very good kick returner. And you see that speed he has. It’s a 4.3 speed, and for a guy to hit a lane at 4.3, it’s going to be tough for a kicker or the backside safety to make a play,” explained Clay. “And Jalen at TCU, he was dynamic. You give him some lanes to get downhill — you guys saw it. When he catches a screen, he can make people miss, he can get downhill.”

Both players have to be ready at any time, and each already understands it’s about helping each other.

“Whoever’s number is called, they’re going to be ready for it. And that’s my job to do, to have them ready for it at the drop of a hat,” Clay said. “We know injuries are part of the game and Quez got banged up a little bit at the end of the first half. Jalen stepped up and he had a really good return for us.”