Miles Sanders: A Successful Offense Needs to Run the Ball

The third-year running back played the good soldier earlier this week, but he could get frustrated moving forward if the Eagles’ offense isn’t tweaked. 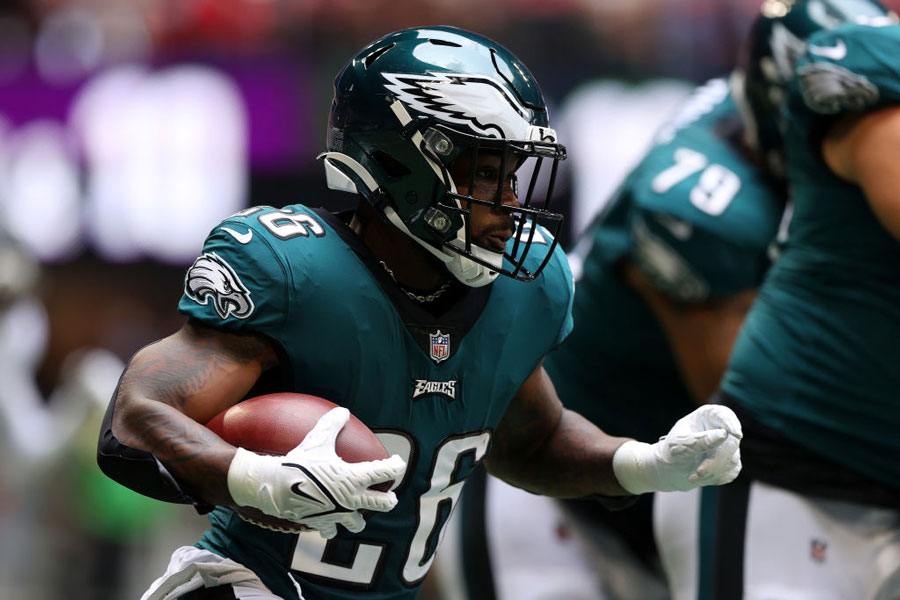 Miles Sanders carries the ball against the Atlanta Falcons at Mercedes-Benz Stadium on September 12th. / Photograph by Todd Kirkland / Stringer via Getty Images

If anyone had cause to be upset after the Eagles’ 41-21 setback against Dallas on Monday night, it was Miles Sanders. The third-year running back out of Penn State is inarguably one of Philadelphia’s best playmakers, yet he somehow only carried the football twice in the loss — a career low for him.

Considering that the Eagles were outmanned from a personnel standpoint by the explosive Cowboys offense, the conventional wisdom would be to try to keep the football away from Dak Prescott and Co. But Nick Sirianni saw it a different way.

“We wanted to make sure we were able to keep up with them,” the rookie coach said after the game. “We knew they were an explosive offensive. We wanted to be able to push the ball down the field and hit some of the underneath zones that we saw, while also obviously mixing the run game in there. In the screen game, again, you fall behind a little bit and you have to get off that game plan a little bit. We knew we had to score with this team, because we knew they were able to score and score quickly.”

Perhaps the more prudent path would have been to try to shorten the game, stay within a score in the fourth quarter, and hope the big play or two that define most NFL games would go the Eagles’ way. The best path to that scenario would have seen Sanders getting 22 carries, not the aforementioned two. Success would have meant third downs converted and siphoning off the clock.

Despite never getting a chance to put his imprint on the game, Sanders took the high road Wednesday after practice. “Honestly, I didn’t dwell on it too much,” he said. “I can only control what I can control, and the way the game was pretty much out of hand early, I can see why the game plan, or whatever they had planned, didn’t go as planned.”

The game did seem out of control early due to the Cowboys’ dominance, but their failure to cash in on some opportunities, plus a couple of key mistakes, including a fumble by Prescott and curious Mike McCarthy clock management at the end of the second quarter, kept the Eagles in the game coming out of intermission.

Even after a pick-six turned all the momentum Dallas’s way, the Eagles were only down 27-14 and got the ball back with 4:02 to play in the third quarter. There were plenty of opportunities to stay patient for Sirianni, but Sanders conjured up a troubling notion.

“It’s kind of like a panic throughout the whole team, just based on the way the game went,” the RB1 said. “I didn’t question it. Didn’t show any type of emotion. I just kept playing the game.”

Sanders did make sure to clarify he wasn’t lobbing grenades at the coaching staff. “I’m here to just quiet all of that down,” he explained. “I’m not over here saying what y’all really want to me to say. I’m just here to [quiet] all of this. It’s on to the next week.”

Sirianni claimed earlier this week that a number of RPOs were called. Those are sometimes characterized as running plays, but quarterback Jalen Hurts often read pass or kept the football himself.

“I trust his reads just as much as he trusts everybody else trusts my reads with the ball in my hands, so if he has to pull it to do what he’s got to do to get a first down or to get some yardage, I’m all for it,” Sanders said of Hurts.

Sirianni, though, admitted his management of the running game could use improvement. “I do need to do a better job running the football,” the coach said. “There’s no question about that. We need to be able to do that to help us be a balanced team and help us win football games.”

On Thursday, Philly Mag asked offensive coordinator Shane Steichen if taking away the option and calling more conventional running plays is in the conversation.

“Yeah, those are conversations we’ve had throughout the week,” Steichen said. “RPOs do help us, but sometimes when we want to run the football, we do have called running plays. And so we got to keep looking through those things and getting better at it.”

Hurts intimated that Sanders’s time is coming. “He’ll get his touches,” the QB said. If not, frustration seems to be boiling just under the surface.

“I do believe to have a successful offense, you have to run the ball,” Sanders said, before adding, “I can sit here and tell you what I think we should do, but I’m not a coach.”