The Eagles’ rookie head coach gave a convoluted explanation for the team’s lack of offensive balance. 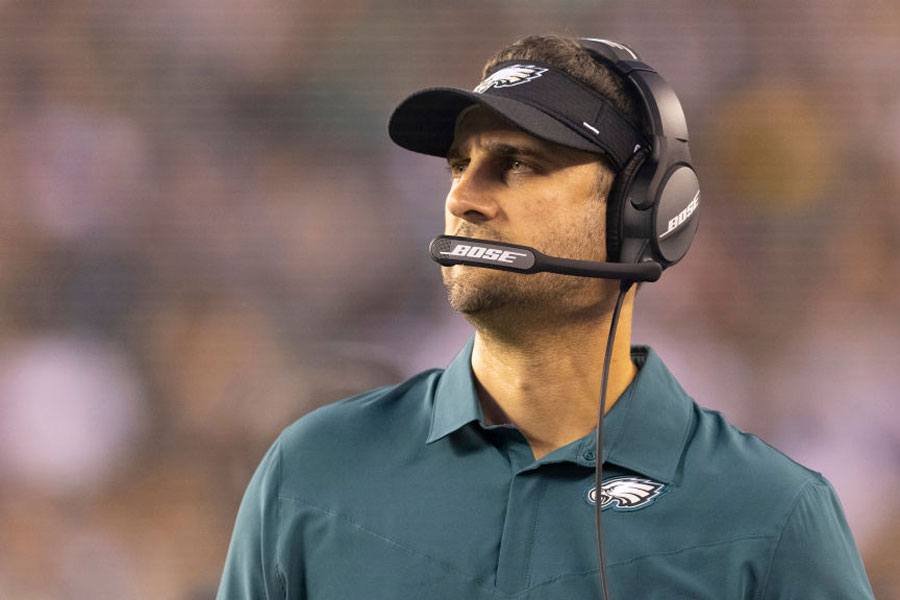 Nick Sirianni during a preseason game against the Pittsburgh Steelers at Lincoln Financial Field on August 12th / Photograph by Mitchell Leff / Stringer via Getty Images.

In a bold attempt at an illusion that could get David Blaine his next residency in Las Vegas, Nick Sirianni explained the historic lack of traffic from his running backs during Monday’s 41-21 blowout loss to the Dallas Cowboys by counting plays that weren’t handoffs to the running backs.

And you thought New Math rules were limited to school-age children.

The disconnect came when Sirianni explained that the pass attempts emanating from run-pass option play calls are often tabulated as runs.

“There were some times there are going to be RPOs where we’re reading somebody. So one time we’re expecting to hand it off, but the guy does something a little different than what we thought and we pull the ball,” Sirianni explained. “Sometimes RPOs do play out that way, and what we do is we count RPOs — if they’re going to take a guy and replace — get him out of position for the pass, we actually count those as runs.”

You saw two carries by Miles Sanders and one by Kenny Gainwell at AT&T Stadium in Arlington, Texas. The Eagles coaching staff evidently counted more at TT&A Field in Bizarro World. To be fair, Sirianni did stipulate that he needs to run the football more.

“Again, I do need to do a better job running the football. There’s no question about that,” the coach admitted. “We need to be able to do that to help us be a balanced team and help us win football games.”

The concerning contradiction came quickly, though, when the coach was pressed on whether he was contented with all of his RPOs turning to passes.

“I’m okay with living with that as far as the ratio, because, like I said, we’re reading a guy,” Sirianni said. “We’re not blocking a guy, which creates better angles for the entire offensive line when you do that, because you’re just reading. ‘What did you do? Oh, you did that? I hand it off. Oh, you did this? I pull it.’ I’m comfortable with that. We count those as runs.”

Next comes the decision-making of young quarterback Jalen Hurts. Is the second-year player with only seven starts under his belt pulling it too often when he should be handing it off?

Here’s where we get into problem-solving 101. If Hurts is making the right decisions on the RPOs and Sirianni believes the Eagles need to run the football more to become a more balanced offense, the solution seems simple: Take the option away.

Although the NFL is ludicrously over-legislated, it’s not an indictable offense to line the QB up under center and simply hand the football off to Sanders in traditional fashion. If Hurts is more comfortable in a pistol or shotgun look, an offset placement from the back and an ensuing handoff are also available.

Then there are manufactured touches, like jet sweeps, to get the ball in the hands of playmakers. But that’s something Sirianni also eschewed in the Lone Star State, somehow running more than 50 offensive plays without even an inkling of pre-snap motion.

“Does [Sanders] need more than five touches? Of course,” Sirianni said when discussing his RB1 after a two-carry, 27-yard performance against the Cowboys. “The way the game went, he didn’t get that. As far as Miles getting touches, there’s no doubt we’ve got to get our playmakers the ball. He’s a playmaker. He’s shown that he’s a playmaker, whether it’s the screen game or it’s in the backfield getting the ball.”

For now, Sanders is playing the good soldier.

“Honestly, I didn’t dwell on it too much,” he said following Wednesday’s practice. “I can only control what I can control, and the way the game was pretty much out of hand early, I can see why the game plan or whatever they had planned didn’t go as planned.”