Nick Sirianni Wasn’t Ready for Prime Time vs. the Cowboys

The Eagles’ rookie head coach was overmatched in a 41-21 loss to the Dallas Cowboys. 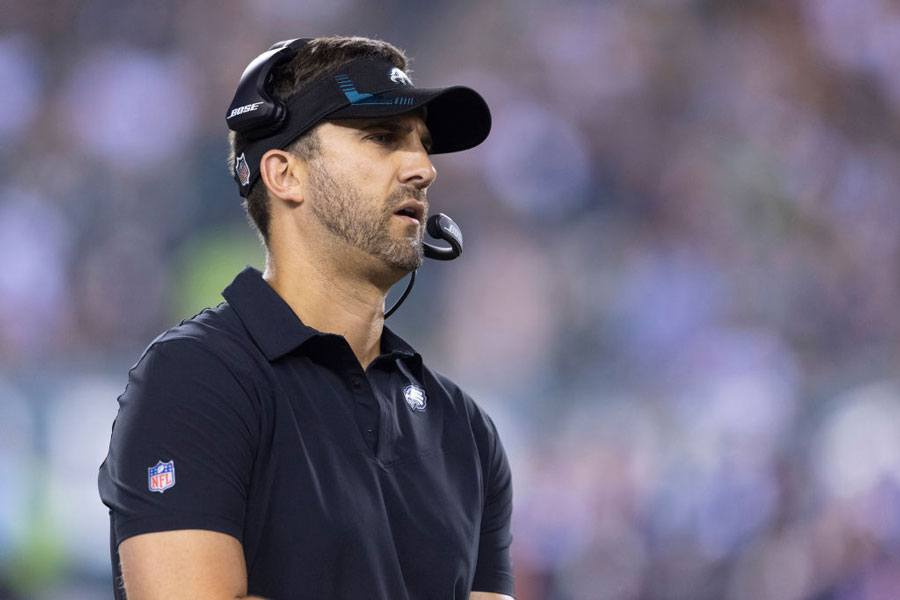 Nick Sirianni looks on against the New England Patriots in the second half of the preseason game at Lincoln Financial Field on August 19, 2021. / Photograph by Mitchell Leff / Stringer via Getty Images

After Week Two, Nick Sirianni went the self-affirmation route following a bit of a coaching implosion against the San Francisco 49ers, sparking a callback to Al Franken’s old Saturday Night Live character Stuart Smalley. So let’s stick with the SNL theme to explain what happened to Sirianni and his young, inexperienced coaching staff during a 41-21 drubbing at the hands of NFC East rival Dallas in North Texas.

The original cast of the NBC late-night institution was labeled the “Not Ready for Prime Time Players,”and Sirianni and his young defensive coordinator, Jonathan Gannon, certainly lived up to that nickname in their first opportunity to show off against a talented foe.

Neither cobbled together much of a game plan, with the Dallas offense just settling down to double-team Javon Hargrave and Fletcher Cox to force the pedestrian linebackers to make plays and Sirianni coming up with the convoluted notion of keeping up with the explosive Cowboys offense by not running the football and staying away from any pre-snap motion against a fast but mistake-prone defense.

“We wanted to make sure we were able to keep up with them,” Sirianni claimed. “We knew they were an explosive offensive. We wanted to be able to push the ball down the field and hit some of the underneath zones that we saw while also obviously mixing the run game in there. In the screen game, again, you fall behind a little bit and you have to get off that game plan a little bit. We knew we had to score with this team, because we knew they were able to score and score quickly.”

Think about that explanation, which essentially boils down to the thesis that while playing one of the most explosive offenses in the league, you should snap your fingers and just play similarly to keep up.

Maybe the better path would have been to try to slow things down. While the majority of that falls on the shoulders of Gannon and the defense, the offense could have helped by controlling the ball a bit and by actually converting a third down before the third quarter — a goal that can be accomplished by running the football on occasion or by scheming a receiver open.

Yes, the analytics nerds are going to complain — and correctly — that the probabilities of winning decrease when you play old-school football. The variable missing there, though, is that not everyone is equipped to blow through all the green lights to the finish line.

The Cowboys actually gave Philadelphia chances — most notably Javon Hargrave’s strip-sack, which Fletcher Cox corralled for his third career touchdown in the Dallas end zone; a failed Dak Prescott sneak on 4th-and-goal at the Eagles’ one-yard line in the first quarter; and Mike McCarthy’s terrible clock management right before halftime.

Sirianni responded to those gifts by handing back more expensive ones of his own.

The Eagles called designed runs on just 9.4 percent of their plays — the fourth-lowest rate in any NFL game over the past 15 seasons. Only three of them went to the actual running backs — Miles Sanders (two) and Kenny Gainwell (one) — the fewest by any team in two decades.

“The first half, just with how that went, without getting a lot of plays, those numbers get skewed sometimes,” Sirianni explained. “I know what they are, but when you don’t have that many plays in the first half — because you have penalties that stop drives — defense was on the field quite a bit, and then you’re in a position in the second half where you’re down two scores the whole time. That’s where that kind of comes into play.”

More so, Sirianni’s offense put up a goose egg when it came to the pre-snap motion that’s in vogue around the league — something he was supposed to amp up in the wake of Doug Pederson’s failures late in his coaching run.

“I just felt like, you get the ball to midfield and then you stall out for different reasons,” the coach said. “Either I didn’t call a good enough play, whether there was a pre-snap penalty or a penalty, whether there was some pressure, it was coaching, it was execution. We all had a hand in this.”

And there was no self-affirmation this time, just the realization that the Eagles’ coaching staff wasn’t ready for prime time.