A Rookie Ramp-Up for Milton Williams

The Eagles’ rookie DT could take on a bigger role after the season-ending injury to Brandon Graham. 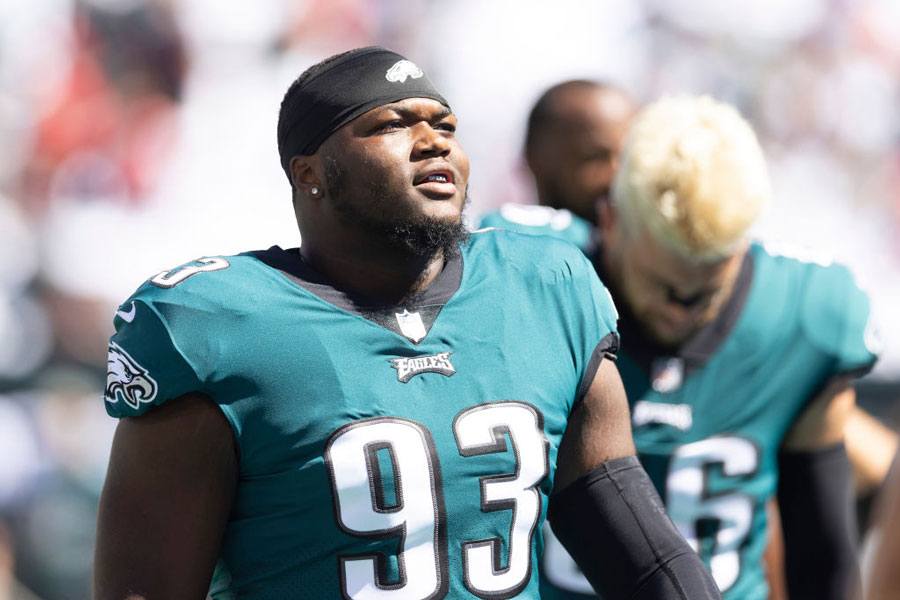 Milton Williams looks on against the San Francisco 49ers at Lincoln Financial Field on September 19, 2021. / Photograph by Mitchell Leff / Contributor via Getty Images

You always have to prepare for the future, and the Eagles started to put together their succession plan for Brandon Graham back in the spring.

The six-foot-three, 290-pound Milton Williams was taken in the third round of the 2021 NFL draft out of Louisiana Tech, and the Eagles quickly realized just how much the stocky Williams reminded them of the now-33-year-old Graham.

After a slow start to his career, Graham has developed into one of the better edge players in the league, with the versatility to move inside during pass-rushing situations — the kind of valuable dexterity that makes things easy on game days for defensive coordinators.

The comp with Williams is far from perfect, however.

A former number 13 overall selection in 2010, Graham has the kind of explosion that’s only seen in athletes who reach that stratosphere in the draft process. B.G. also went to a traditional football powerhouse, Michigan. More importantly, Graham is a natural outside player who kicks inside, while Williams is perceived to be a three-technique who can also play outside.

Meanwhile, the nature of Williams’s pedigree reveals he isn’t quite the finished product Graham was coming out of Ann Arbor. That said, the Eagles believe they can get the rookie there with the help of defensive coordinator Jonathan Gannon and defensive line mentors Tracy Rocker and Jeremiah Washburn.

The always excitable Gannon was caught on camera fired up when GM Howie Roseman’s draft-day maneuverings in the third round landed the player the DC wanted.

Now, the process of turning Williams into the heir apparent for Graham has to be ramped up after the latter was lost for the year with a torn Achilles’ against San Francisco.

“Ramped-up,” however, isn’t in the thesaurus next to “replace” in this instance. No rookie can step in for Graham, and Gannon realizes it will take a village that likely includes Josh Sweat and Ryan Kerrigan as well.

“I talked to our guys [Tuesday] about the void that has taken place with Brandon and, obviously, his not being able to play with us the rest of this year,” Gannon said on Wednesday. “You know, from a leadership and a character and an attitude standpoint, I think collectively we have to — everyone has to, you know, try to fill that void collectively, because no one guy is going to be able to do that.”

Williams, though, figures to get more snaps at left end as well.

Through the first two regular-season games, Williams has seen most of his playing time inside, but back in training camp, the opposite was true as the Eagles started his cross-training.

Williams had 31 snaps in the opener at Atlanta and 27 vs. San Francisco, numbers that “could possibly even go up a little bit,” according to Gannon.

“The reason he played multiple spots in camp and then in certain — the preseason games, just from a numbers standpoint, we wanted to see him play inside, and he played a little bit outside, too,” Gannon said when discussing Williams. “But he will be a piece that we continue to use and move him around within the package and the call. We’re going to try to put him in the best spot that we can, as with all of our pieces, to play winning football.”

In 30 games at Louisiana Tech, Williams had 10 sacks playing defensive end, but his lack of length had most NFL personnel evaluators projecting him at three-technique.

“We’re trying to accentuate guys’ skill sets,” Gannon noted. “And how the game unfolds — we always have a certain way how we, in our mind, ‘Here’s how we’re starting the game, the adjustments we’re making, here’s who’s in on certain packages.’ And how the game kind of unfolded, that’s why you saw his play-count a little bit down.”