Takin’ It to the Streets: The Philadelphian’s Guide to Street Art

From Cornbread in the 1960s — he’s considered the OG street artist — to the thriving Mural Arts program, Philly has long been a canvas for public art. 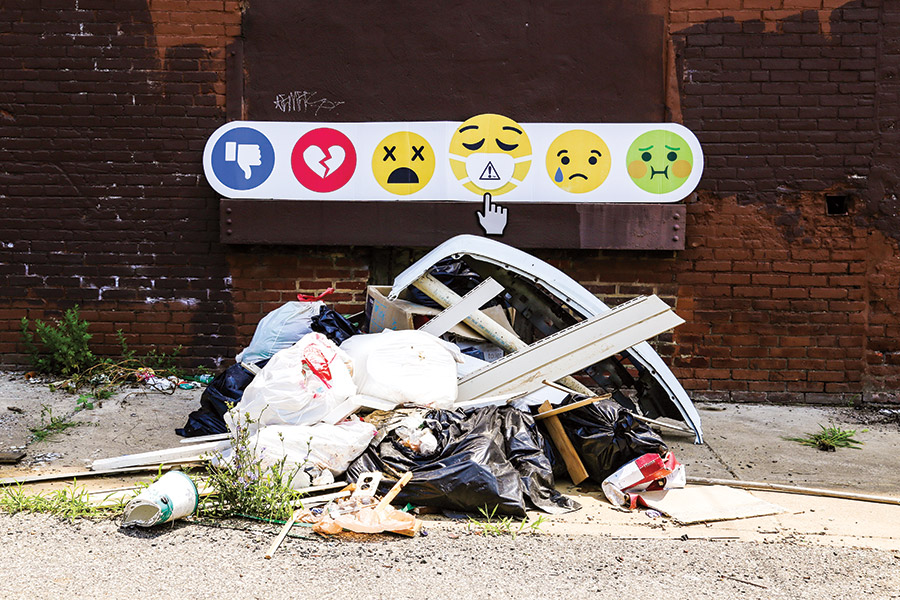 Seen a cool piece of street art around Philly lately? Check out the artists (and their work) below — they just might be behind it.

Kid Hazo (pictured above)
On Instagram @kidhazo
This prankster makes you do a double take with his irreverent, often real-looking signs and murals that he hides around town. He recently pasted “Filthadelphia” in North Philly. 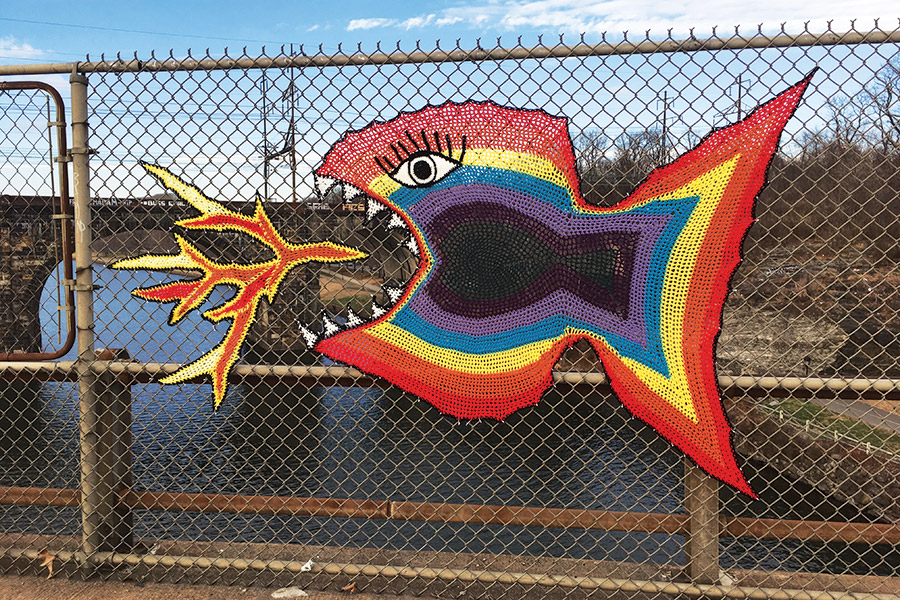 J. Curtaz
On Instagram @bindingthings
This artist takes yarn bombing to the next level with nature-inspired, rainbow-bright crocheted pieces, like this giant fire-breathing piranha on the fence of the Girard Avenue Bridge near the Zoo. 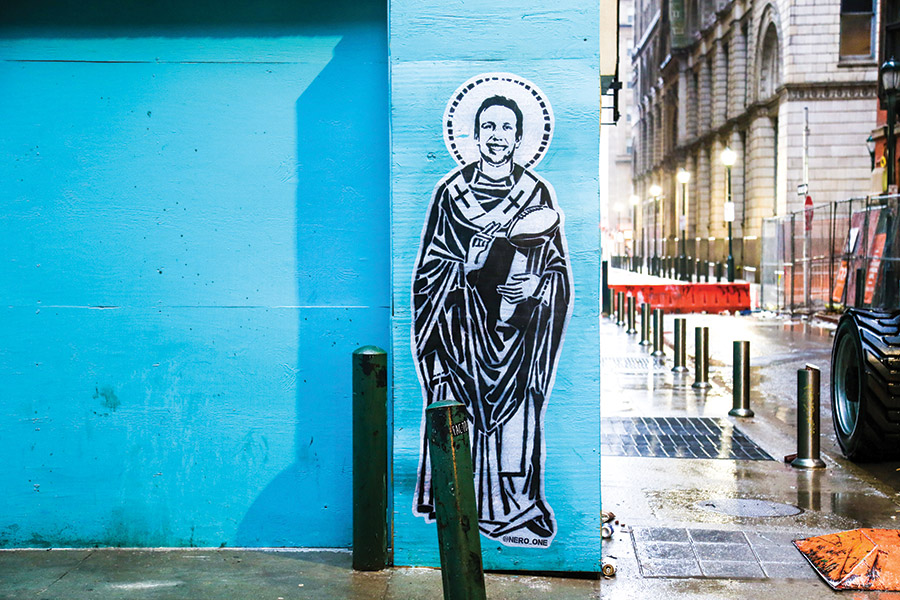 Nick Foles as a saint. Photograph courtesy of Conrad Benner

Nero
On Instagram @nero_one
While Nero made his name with hand-cut, mostly black-and-white stencil phrases (“you belong here” and “hate won’t make us great”), he got big props after pasting up illustrations of Nick Foles as a saint around Center City just before the big parade. 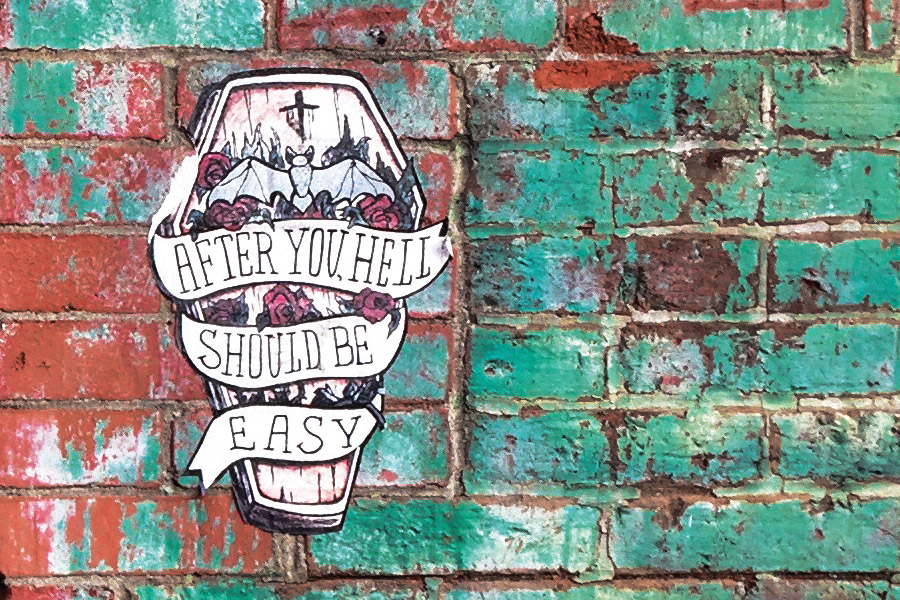 In.phl.trate
On Instagram @in.phl.trate
Her coffin-shaped, Sailor Jerry-esque wheatpastes are emblazoned with delightfully macabre phrases. (A recent Fishtown fave: a paste that says “I’d rather die than be with you” next to a poster promoting an album titled No_One Ever Really Dies. 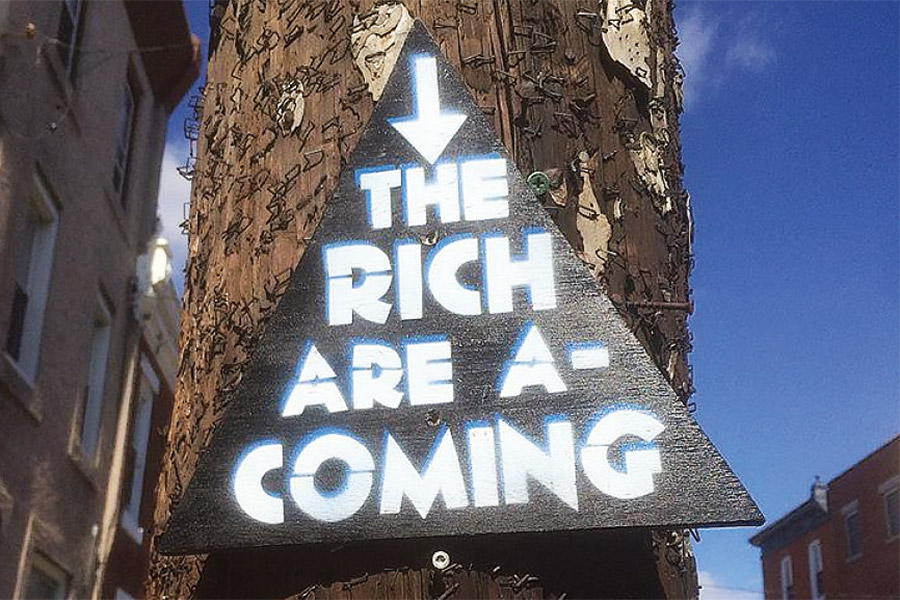 Low Level
On Instagram @lowlvl
Working mostly in spray paint and stencils, Low Level’s latest work can be found on street posts, like this one in Point Breeze, which he posted after parking in his neighborhood became increasingly difficult. 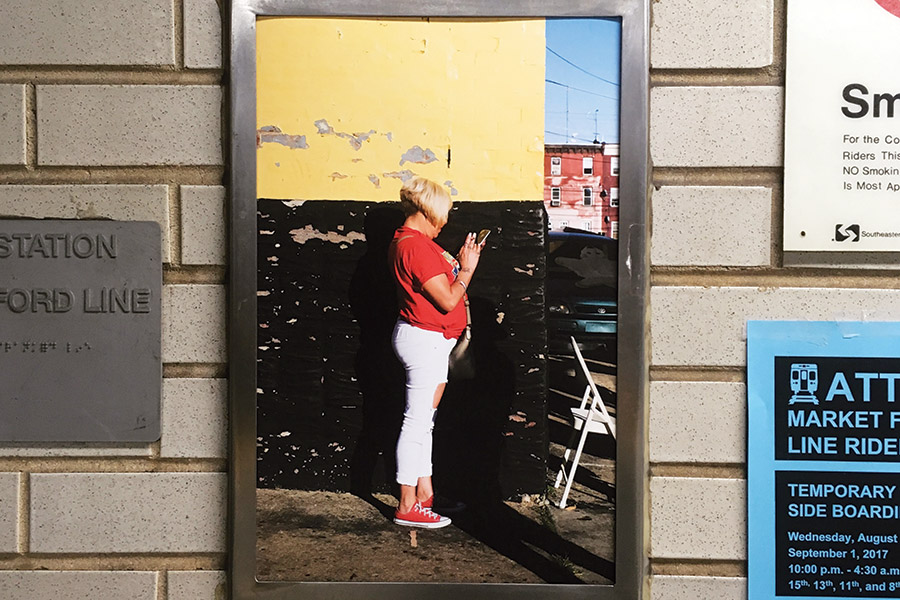 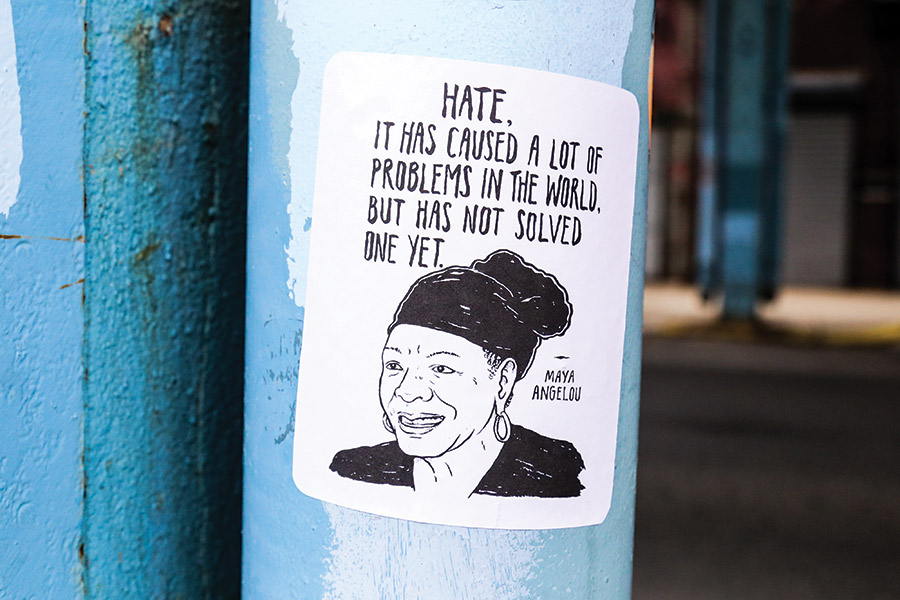 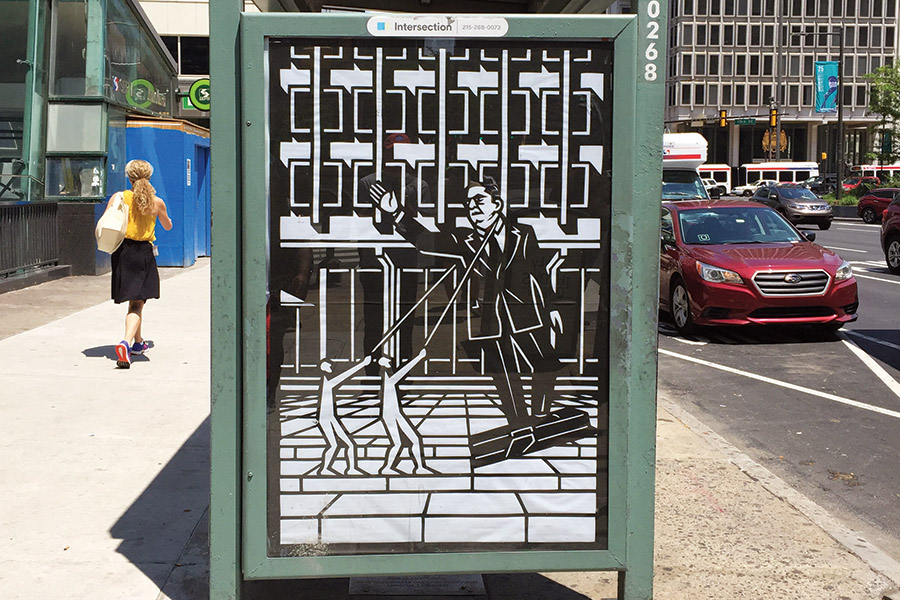 Joe Boruchow
On Instagram @joeboruchow
Boruchow makes intricate paper cutouts and turns them into posters that can be found in abandoned doorways, on Bigbelly cans, and on SEPTA bus shelters, like this “Remove Rizzo” one at 15th and Market streets. 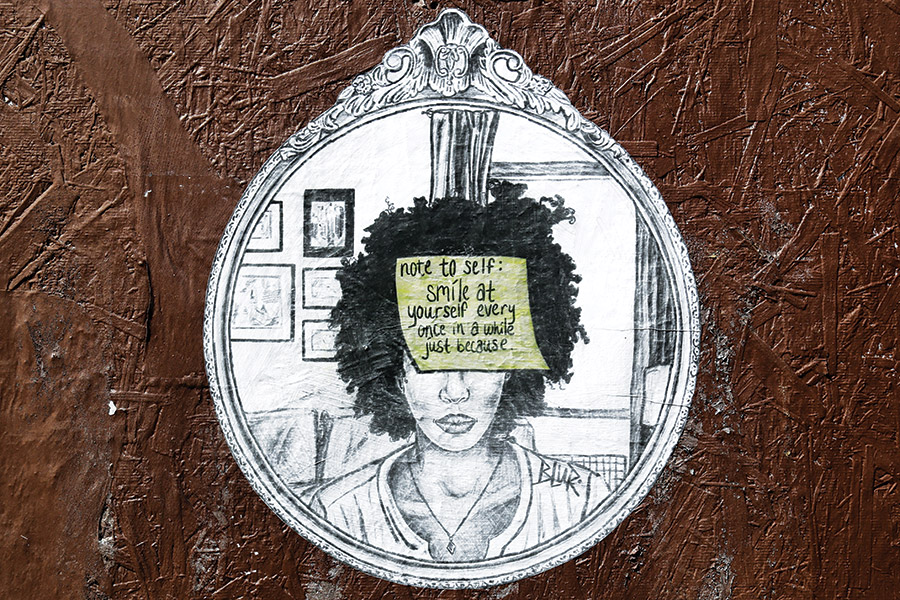 “Notes to Self” portrait. Photograph courtesy of Conrad Benner

Blur
On Instagram @blurstreetart
Blur writes beautiful poems, illustrates them coming out of mouths, and pastes them around town. She also recently created this portrait series s called “Notes to Self” that shares the “stories and empowerment of the lives of Philadelphians.” 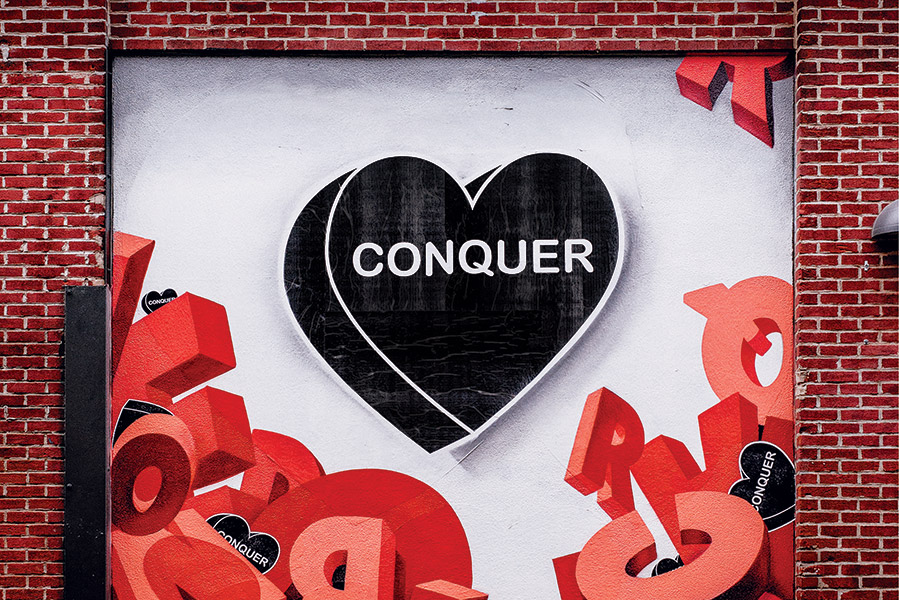 Amberella
On Instagram @amberellaxo
You’ve no doubt seen Amberella’s powerfully simple candy-heart-like pastes around town, either slapped up by the artist or commissioned by owners and curators. (She’s starting to work in other cities, too.) They range from cheeky (“Go Away”) to endearing (“You Are Loved”) to downright boosting (“I Believe In You”).

Cracking a joke about that old pay phone? Look closer; the ones in Center City, North Philly and Fishtown make great canvases. You might even see Sheldon Abba’s photos — he uses the booths as frames. Check out other often-ignored urban objects: Utility boxes, SEPTA bus stops and sidewalks are hotbeds for wheatpastes and paintings. Chicago artist Jim Bachor installed a few mosaics on potholes in Queen Village and Fishtown, while street signs and poles are dotted with creative stickers and fake signs. Fences are popular yarn-bombing spots.

Street artists won’t deface occupied properties unless they’ve been commissioned to. But Philly is rife with vacant windows, boarded-up buildings and construction sites, which are wheatpaste hot spots, especially in Fishtown, NoLibs, Spring Arts and South Philly. Lastly, many artists are driven by current events, so if there’s a big rally or protest planned, look for fresh art everywhere. 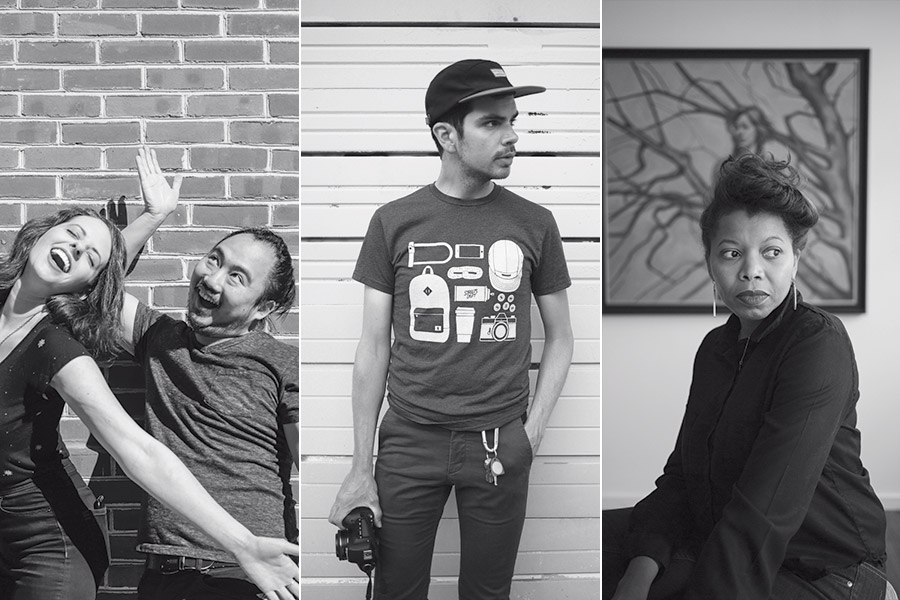 Sara McCorriston and Jason Chen
This duo founded Queen Village’s Paradigm Gallery in 2010 with the intent of taking the snob factor out of buying contemporary art. (They regularly host free events and have a special love for Philly-based artists.) In 2012 they partnered with HAHA Magazine to launch HAHA x Paradigm, which curates street art installations for clients — think mosaic manhole covers and utility-box art around town.

Ginger Rudolph
Rudolph’s online publication, HAHA Magazine (“High on Art, Heavy on Antics”), has been bringing the world’s most inspiring contemporary art to a global audience from her Philadelphia home since 2009. Through a collaboration with Paradigm Gallery, she helps pair artists with clients for street art installations in Philly and beyond.

Published as “Takin’ It to the Streets: The Know-It-All Guide” in the April 2018 issue of Philadelphia magazine.