Protesters who refused to leave the lobby of 8 Penn Center were arrested at the weekly protest at Sen. Pat Toomey’s Philly office. 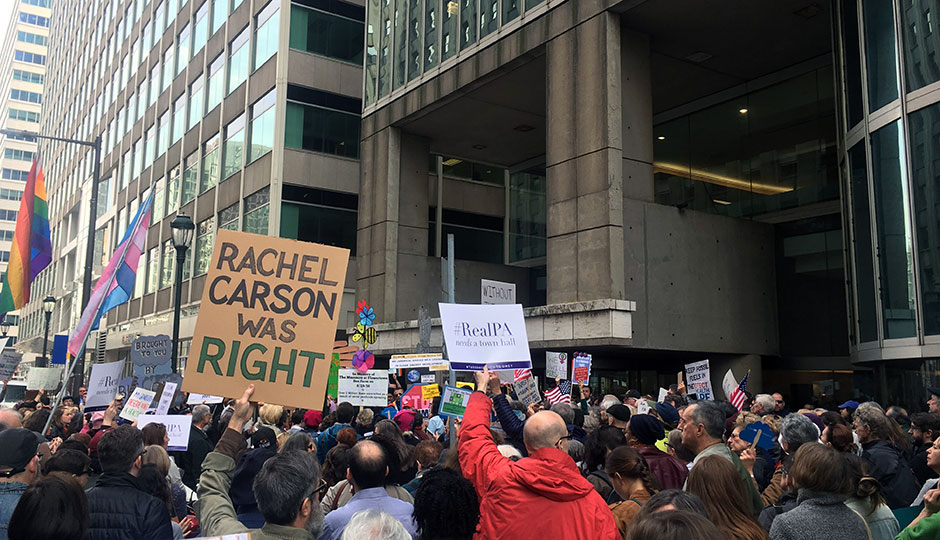 Updated with a statement from Sen. Toomey’s office.

Eleven people — four men, seven women — were arrested after a sit-in at Sen. Pat Toomey’s Philadelphia offices on Tuesday afternoon. It was part of the weekly “Tuesdays With Toomey” protest.

Protesters said they’d sit in the lobby of Toomey’s offices at 8 Penn Center (17th and JFK) until he scheduled a town hall–style meeting with constituents. He has yet to schedule one, so they said they wouldn’t leave. Cops said protesters would be arrested unless they left. They didn’t, and so their hands were zip-tied. Protesters were taken into the back of a police cruiser.

This particular Tuesday protest outside Toomey’s offices had an environmental theme. People held up signs calling for Toomey to take on President Donald Trump over Trump’s plan to cut $2 billion from the EPA’s budget. One protester even held up a sign reading: “In Memory of the Massacre at Flowertown Bee Farm — 8/29/16. Over 2 Million Bees were killed as a result of aerial pesticide spraying.”

The protesters dropped off a cache of letters to Toomey’s office. Coincidentally — or perhaps not — Sen. Bob Casey announced on Tuesday he’d be holding a series of town halls. The first one will be in Philadelphia on March 12th.

Toomey’s office released a statement on the arrests today to Philadelphia magazine:

Last week, Senator Toomey’s office informed the Philadelphia Tuesday protesters that Senator Toomey would be in Washington today, February 28th, and that staff would not be available to meet due to the impending office move that is scheduled for tomorrow. In an effort to ensure that a constructive dialogue was continuing, staff met with protesters last Thursday in Philadelphia.

Senator Toomey believes that civility is a necessary part of a productive conversation. He does not support the actions of the protesters today who disobeyed the lawful requests from the Philadelphia Police Department.