PHOTOS: First Look at the One Liberty Observation Deck

The One Liberty Observation Deck, 883 feet above street level, opens this Saturday. It offers a panoramic view of the city. Philadelphians are going to get to see their city in a new way at the end of the week: From the sky. Eight hundred-and-eighty-three feet above street level, to be precise.

While there has long been an observation tower at Philadelphia City Hall, the city’s taller skyscrapers didn’t have one until now. On Saturday, the One Liberty Observation Deck opens on the 57th floor of One Liberty Place. It will be open from 10 a.m. to 10 p.m. daily, with a capacity of 275 people. Admission is $19 for adults and $14 for children from ages 3 to 11.

“What got me excited about the project was the opportunity to tell a Philadelphia story,” says Evan Evans, general manager of the Observation Deck. “As a hotelier, I realized that there wasn’t one great place to see it all, and learn it all, and give our visitors something to enjoy. And, then, for our locals, we really are unlocking and unveiling Philadelphia in a way they’ve never seen before. And that was as important to me. This is something that most Philadelphians have just never seen.”

Indeed, the observation deck is not just aimed at tourists visiting Philadelphia. Run by Montparnasse 56, which operates several similar decks in Europe, the One Liberty Observation Deck is also looking to capture locals who before now have not been able to see Philly from such a height. 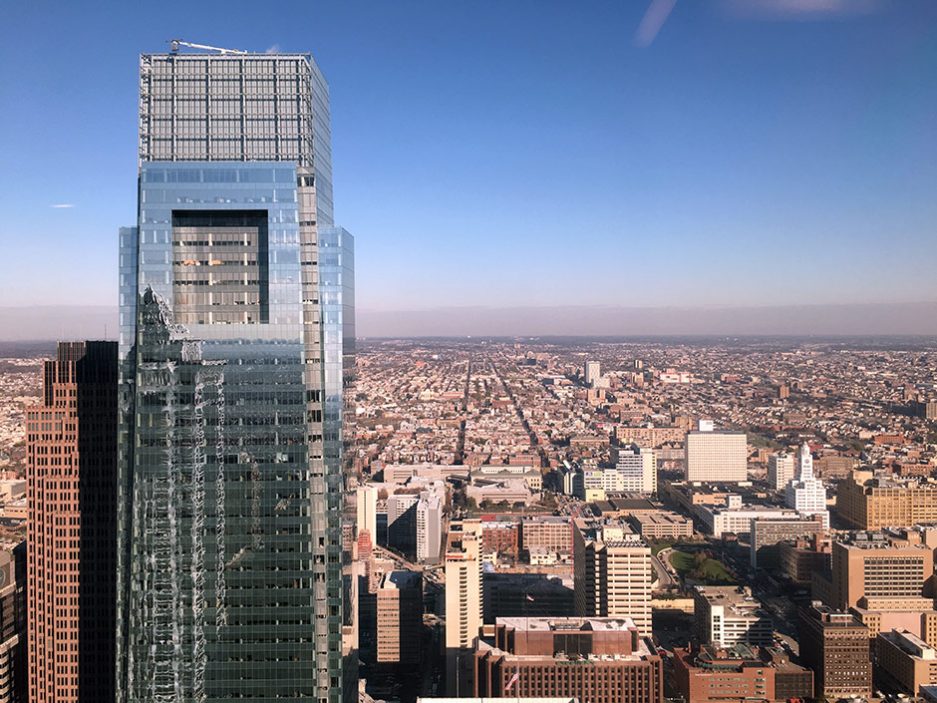 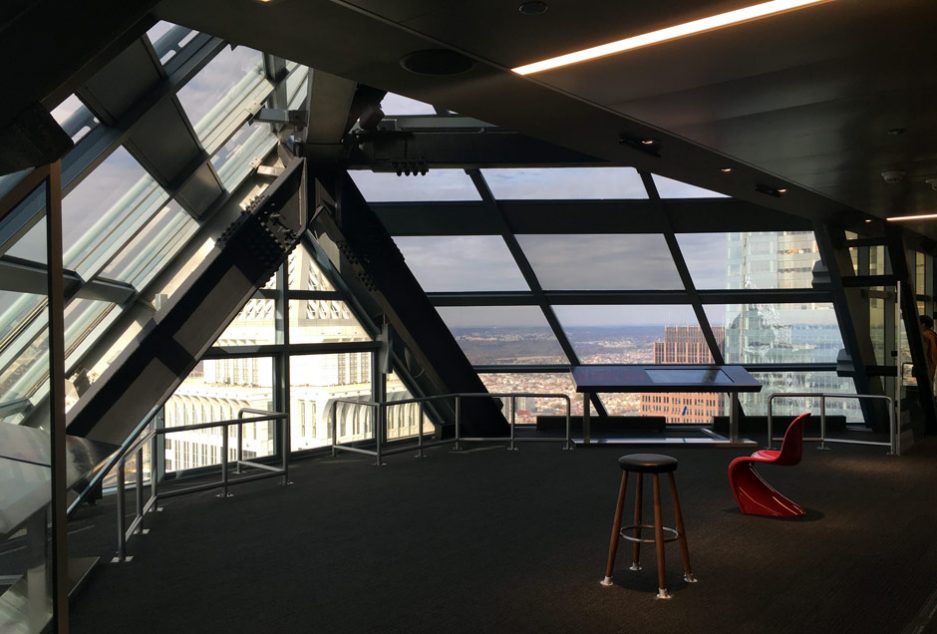 The observation deck has a few seats scattered throughout. 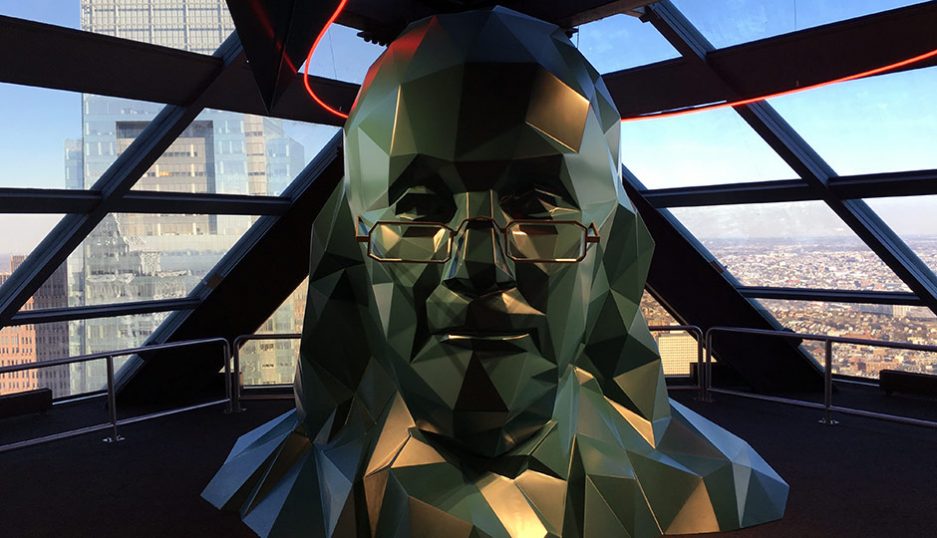 Who knew Ben Franklin could remind us of Max Headroom? 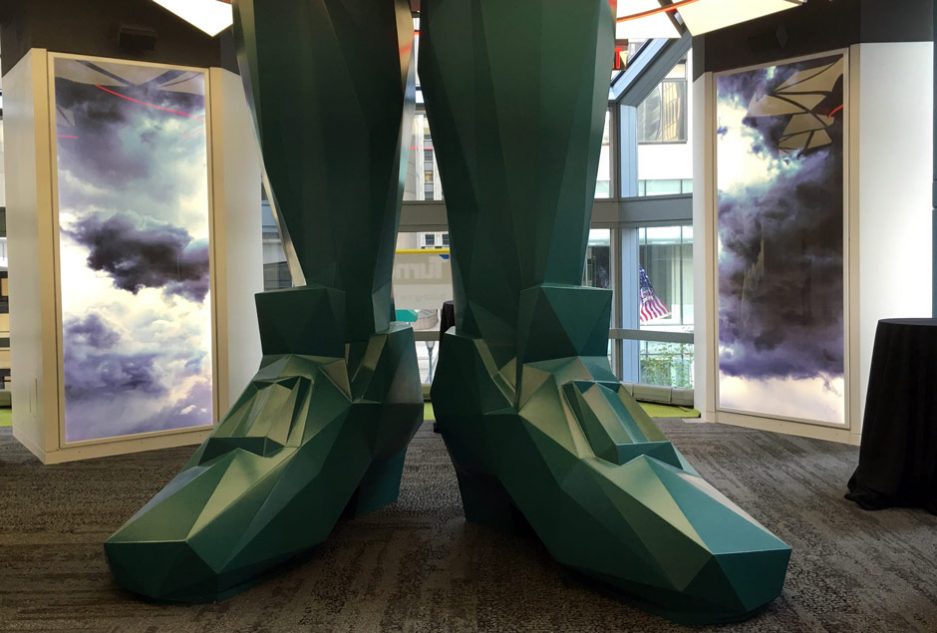 While waiting to get on the elevator at the observation deck, visitors are greeted by a pair of Size 96 feet. Good look finding Yeezys in that size, Ben! 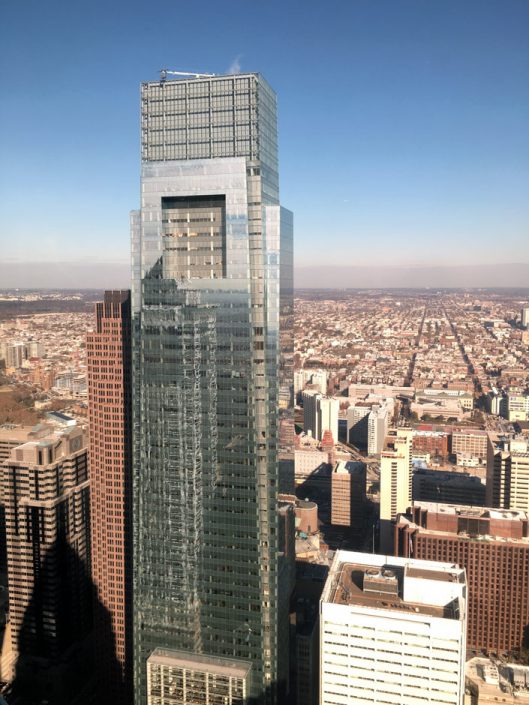 Comcast Center, from One Liberty 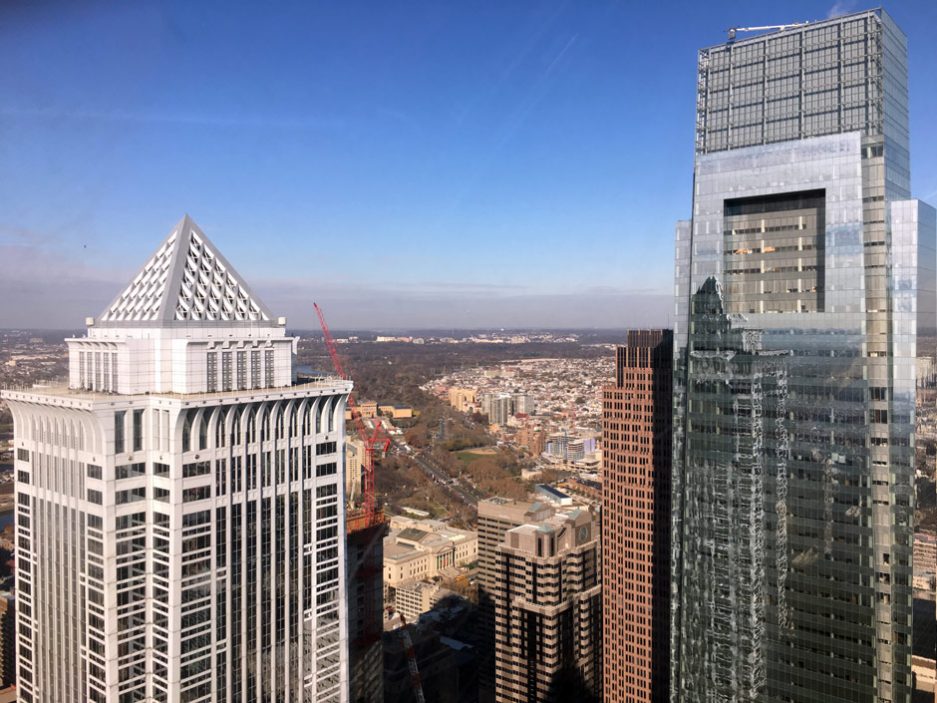 You get to see the tops of the city's other skyscrapers up close from the new observation deck. 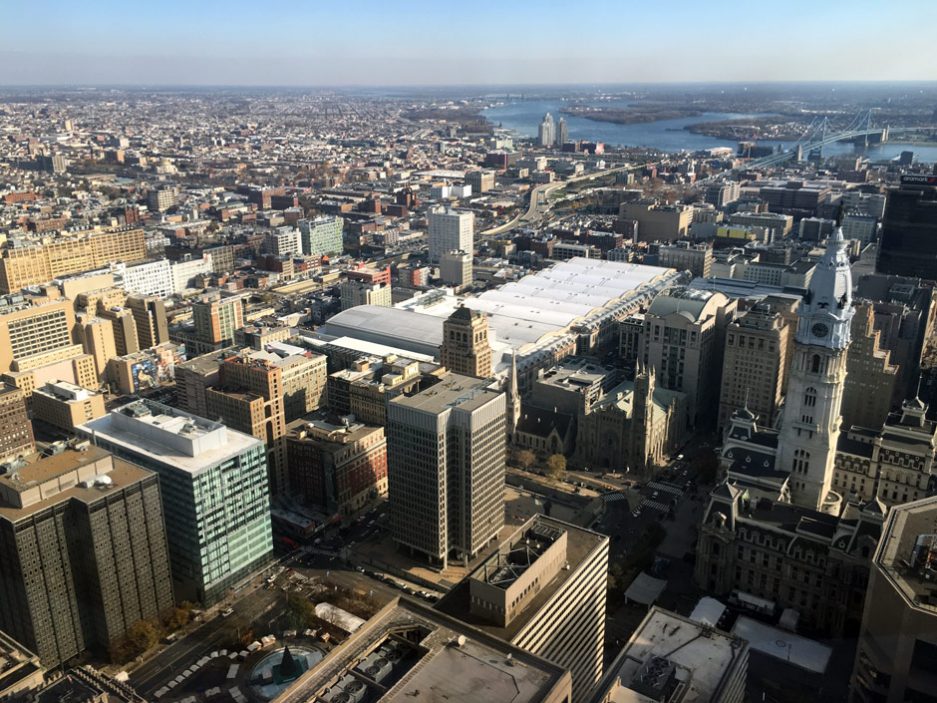 A view of City Hall and the Pennsylvania Convention Center, looking northeast from the observation deck. 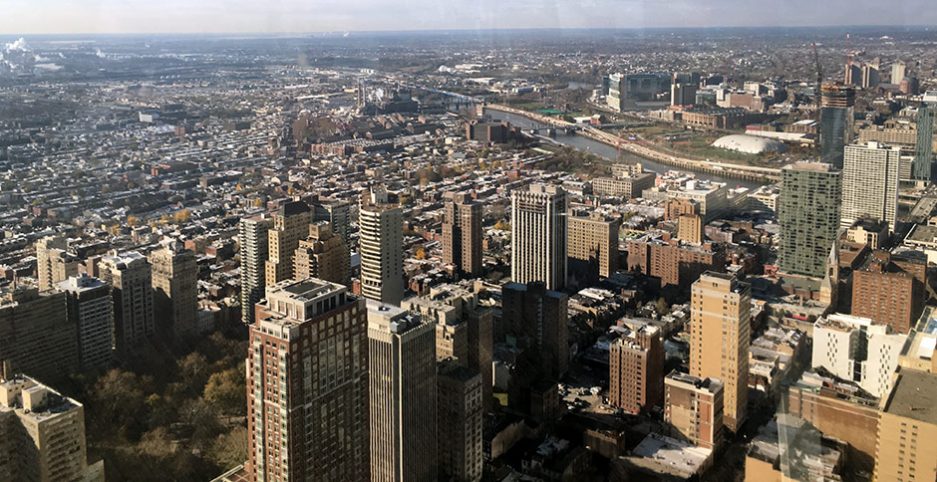 A view from the observation deck looking southwest. 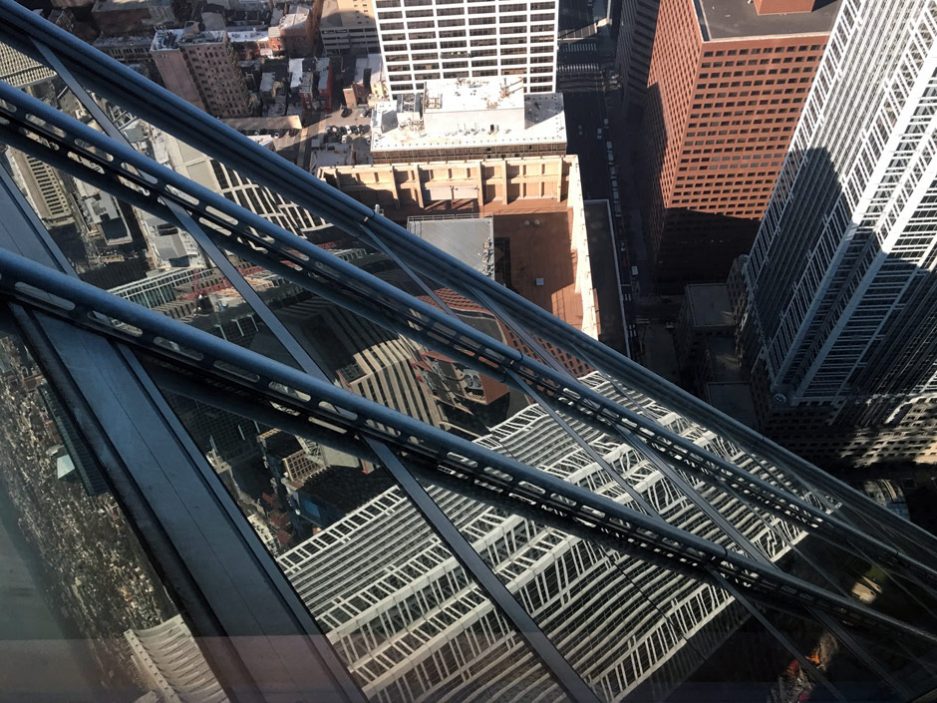 One Liberty's design allows for some interesting reflections of other buildings nearby. 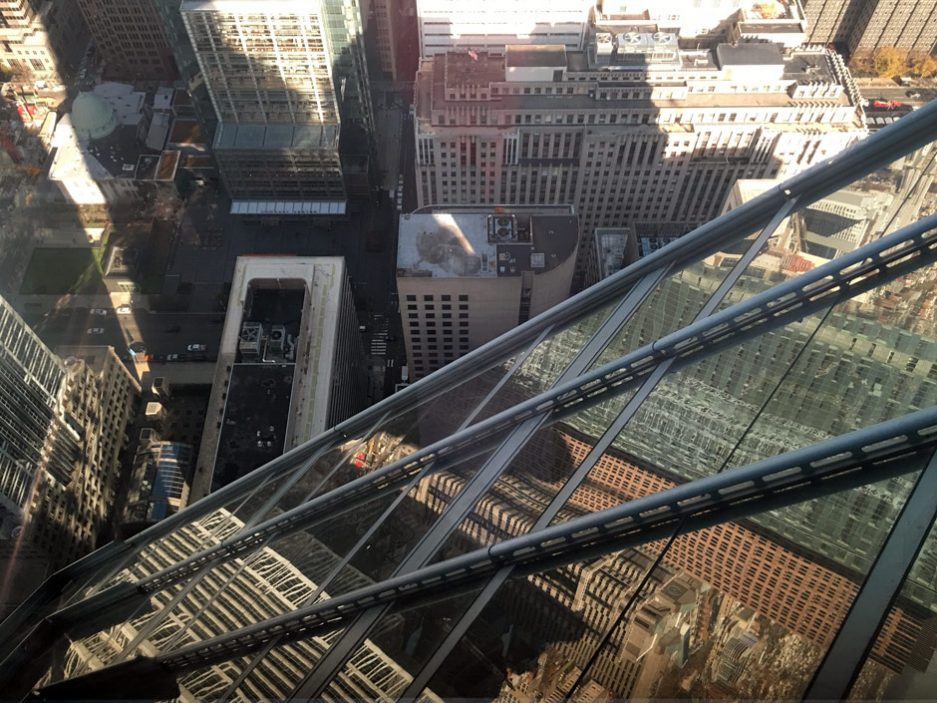 This is another example of the interesting reflections on the outside of One Liberty. 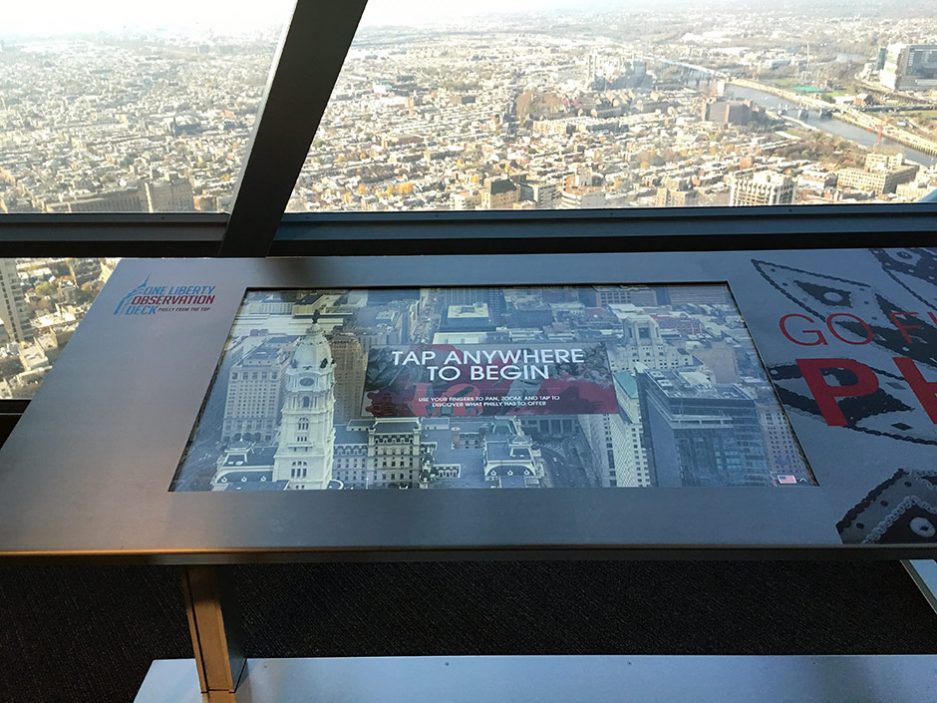 The touch screens at the observation deck allow visitors to scan for a closer look. 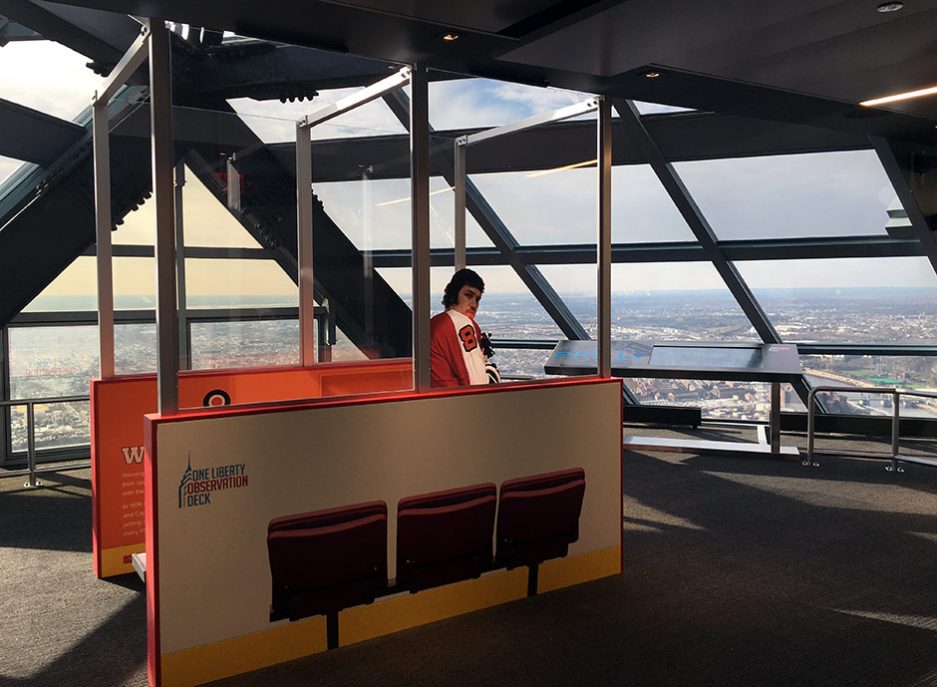 There is a nod to the Flyers' history of physical play at the One Liberty Observation Deck, as a penalty box is set up at one edge. 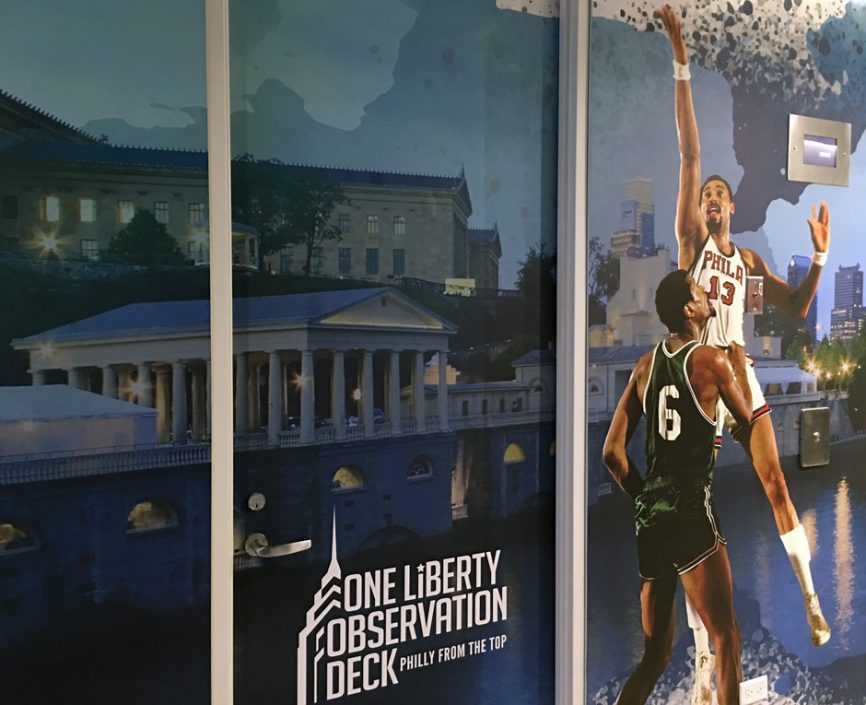 Wilt Chamberlain is featured prominently in the elevator bank. 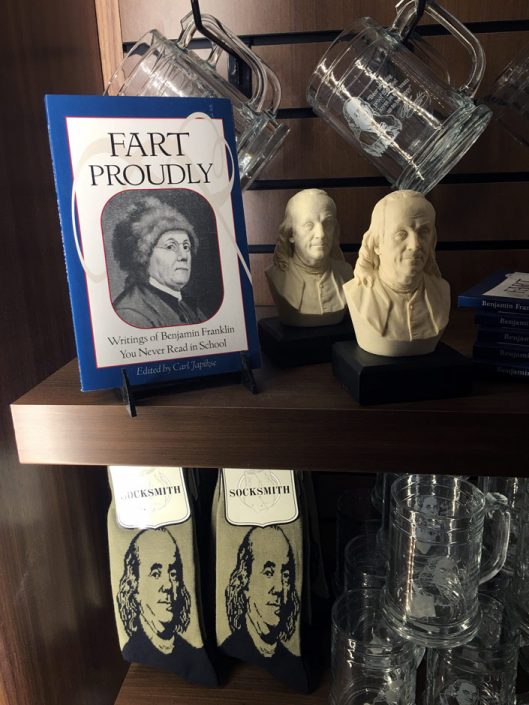 A number of Benjamin Franklin tchotchkes are available at the One Liberty Observation Deck, including "Fart Proudly" and some Ben Franklin socks. 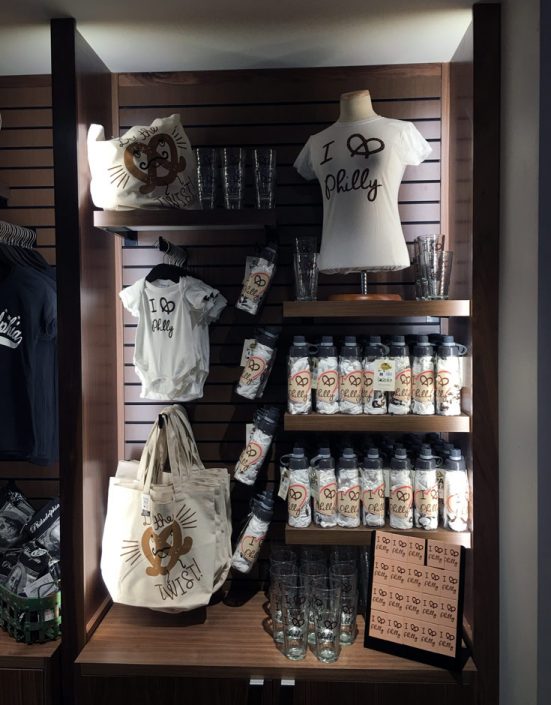 The observation deck's gift shop is full of Philly items, including these nods to the soft pretzel. 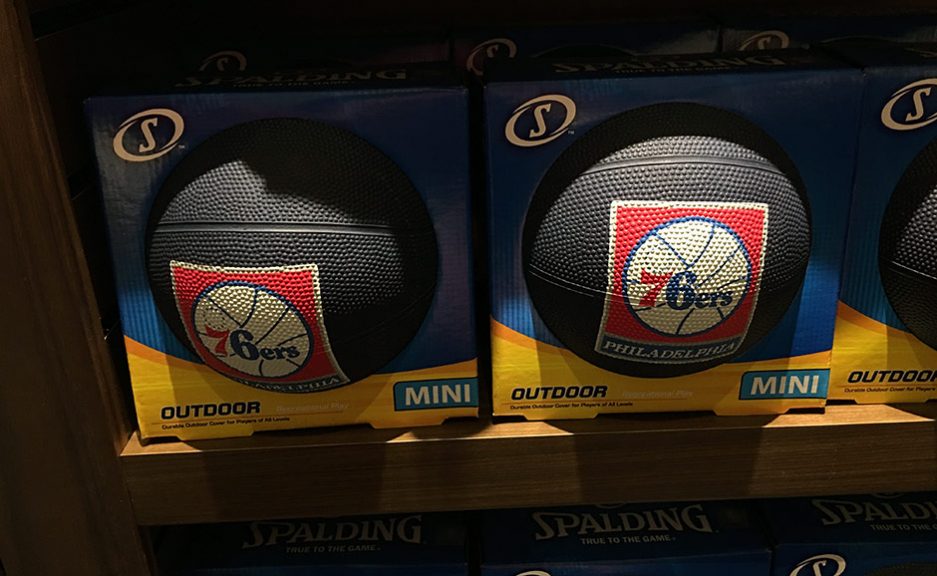 These Sixers basketballs feature the old logo, but they're only a couple months out of date so we'll let it slide. 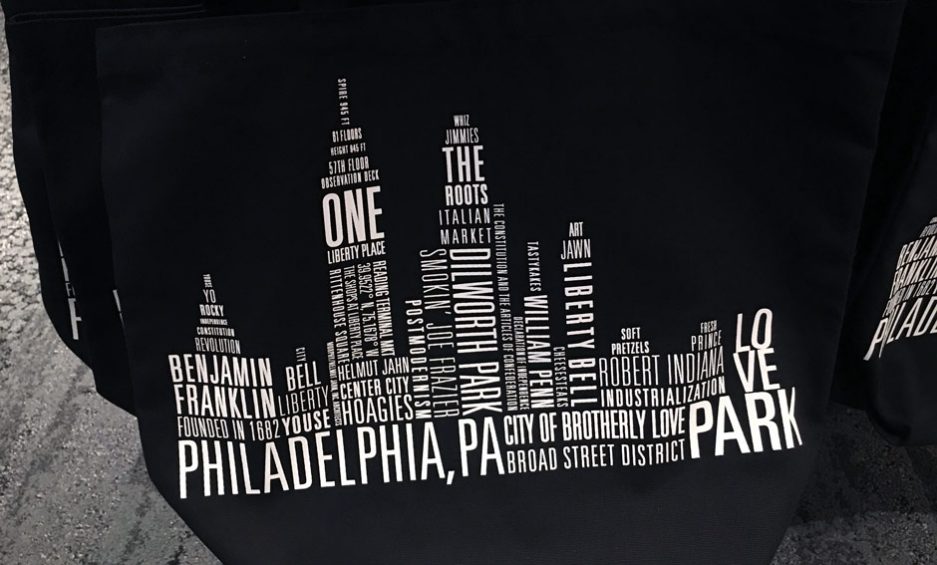 What's your favorite part of this tote bag for sale at the observation deck? Mine's the word "industrialization." 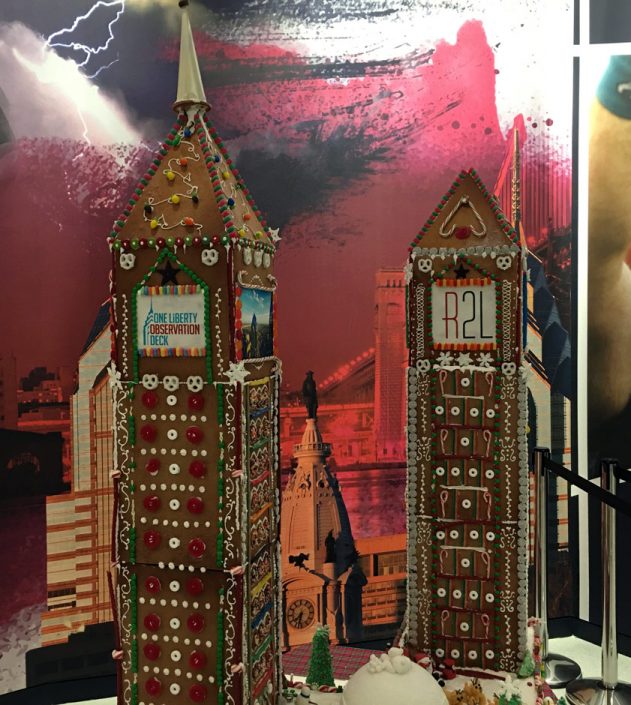 Liberty One and Two, in gingerbread.

Walking off the elevator and onto the observation deck, visitors are greeted by a geometric bust of Benjamin Franklin. The deck uses the exposed steel of One Liberty as a feature; workers tore out the drywall that previously covered the beams. With its giant Benjamin Franklin head and exposed beams, the observation deck looks like a modern version of the original identity of Franklin Mills Mall. (The visual work at the mall, built in the 1980s and since renovated into Philadelphia Mills, was done by Milton Glaser, of I [heart] NY fame.)

The Max Headroom Ben Franklin head at the top references a pair of giant legs (complete with size-96 feet) on the second floor of Liberty Place, which visitors see before being whisked up an elevator to the top. Every four minutes, in a nod to Franklin’s famous kite and key experiment, there’s a simulated thunderstorm.

At the top of the observation deck are several interactive kiosks with touch screens that feature a panorama of the cityscape. There are also three “chair zones” where Philadelphia radio personalities tell stories of the city: Former WXPN DJ Michaela Majoun, man-about-town Jerry Blavat and 97.5 The Fanatic’s Mike Missanelli. There’s even a penalty box at one end.

“There’s a lot of storytelling that happens graphically and visually in the space, and that tells the Philadelphia story,” says Evans. “That was hard. A lot of professionals and a lot of curators had input.”

With hours going late into the night, visitors will also be able to experience a high-up view of the city in the dark. Evans says that’s one of the coolest parts of the observation deck.

“The lights in the city are magnificent,” he says. “They call Paris the City of Lights; well, Philadelphia offers lights in the same way. And when you look at the streets and the layout and how Philadelphia was architecturally laid out, you appreciate the dark spaces of the rivers, the bridges, and the lights of Center City and out into the neighborhoods and then out into the suburbs. It’s really beautiful at night.”