She tells us what it's like babysitting drunks when she's totally sober and explains why "Bohemian Rhapsody" might not be the best song to sing on a busy karaoke night. 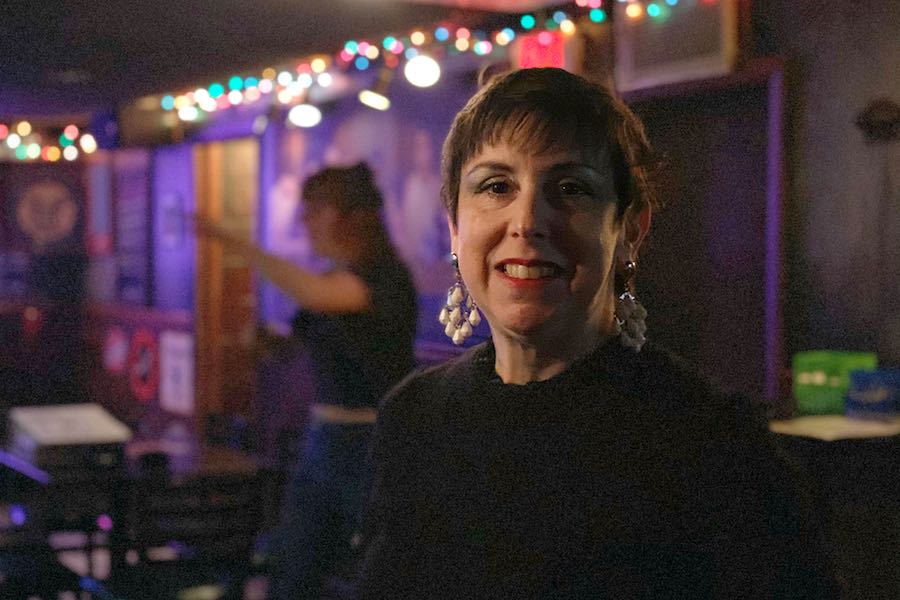 If you’ve spent any time on the Philly karaoke scene, you’ve probably encountered Sara Sherr, who has been running her own Best of Philly-winning karaoke business full time for ten years now. Here, on the day of her 50th birthday roast at Bob & Barbara’s (she hosts karaoke there on Sundays), she tells us all about it.

I grew up in… the Parkwood section of Northeast Philadelphia. I was the Jewish kid in the Catholic neighborhood. That was fun.

My first job in life was… babysitting neighborhood kids. My first job on the books was Baskin-Robbins. I got paid to sit around and eat ice cream all day. The hardest thing about it was writing on the ice cream cakes. I was really bad at that. After that, I worked at Wendy’s. Another job where I ate all day.

My worst boss was at… the Gap in Neshaminy Mall. I don’t want to say too much about her in case she reads this! There was also all the folding. The jeans have to line up the same way. There was this little plastic implement to fold the sweaters a certain way. It was so tedious.

I went to school for… journalism at Temple. I freelanced for the Philadelphia Weekly when it was called The Welcomat, and I decided I was a music critic. Then I freelanced for the Inquirer and Daily News, always working various retail music jobs so I could have health insurance.

I got into karaoke… in 2006. My father runs an entertainment company and karaoke is one of the services they offer. I was working at Tower Records at Broad and Chestnut, and when they closed, he asked me if I wanted him to hook me up with some equipment. I had no idea it would become a full-time thing. I now have five nights a week.

I usually wake up at… 3pm, if it’s after a night that I worked, because I don’t get home until three in the morning. Well, a lot of times I wake up earlier because Boogie, my chihuahua-dachshund mix, jumps on my head.

The best thing about my job is… being around music and watching people express themselves.

The worst is… babysitting drunks. Kindergarten stuff. Don’t grab the mic from people while they’re singing. Don’t touch people while they’re singing. Don’t get belligerent. It’s kind of like dealing with kids, but kids are actually easier than drunk adults because kids are still in the mindset of following directions. Adults can have a sense of entitlement and can be disrespectful.

When I sing karaoke, I like to do… ABC’s “The Look of Love” and Nancy Sinatra’s “These Boots Are Made for Walkin'”. I don’t sing much at my own nights. I usually go see Dr. Thunder at the El Bar on Mondays, because I have that night off.

The most requested songs are… “Valerie” from Amy Winehouse, “You Oughta Know” by Alanis Morissette, “What’s Up?”, “Total Eclipse of the Heart”, “Bohemian Rhapsody” — that’s one of those long ones that people always want to sing when I’m busy, Weezer’s “Say It Ain’t So”, Queen’s “Don’t Stop Me Now”, “Sweet Caroline” by Neil Diamond, Dolly Parton’s “Jolene”, “Shoop”, and “Under Pressure.”

When I want to relax… I watch comedy videos and dog videos on YouTube.

Being a woman in this business is… interesting. Being the age I am, you learn how people feel about their mothers. Most of my customers are significantly younger than I am. Also, a lot of young people or gay people seem happy to have somebody other than the typical bro DJ. But then there are people who don’t want to see a woman in power. I can say something like, “Please don’t drop the mic.” And it’s taken as aggression. They want to argue with me about everything. It’s just engrained in some people. There are definitely times when my experience is gendered.

If you want to buy me a drink at my birthday party tonight… I don’t drink anymore. I stopped in 2014. I found that alcohol was one of my migraine triggers. Sometimes I’d love to have a drink at work to take the edge off and be on everyone else’s level, but then I’d be in bed for two days.