I Love My Job: Meet the Exec Who Left the Nationals for the Flyers

As president of business operations for the team and the Wells Fargo Center, Camillo explains why she’s fulfilling a lifelong dream and why her relationship with Gritty is pretty complicated. 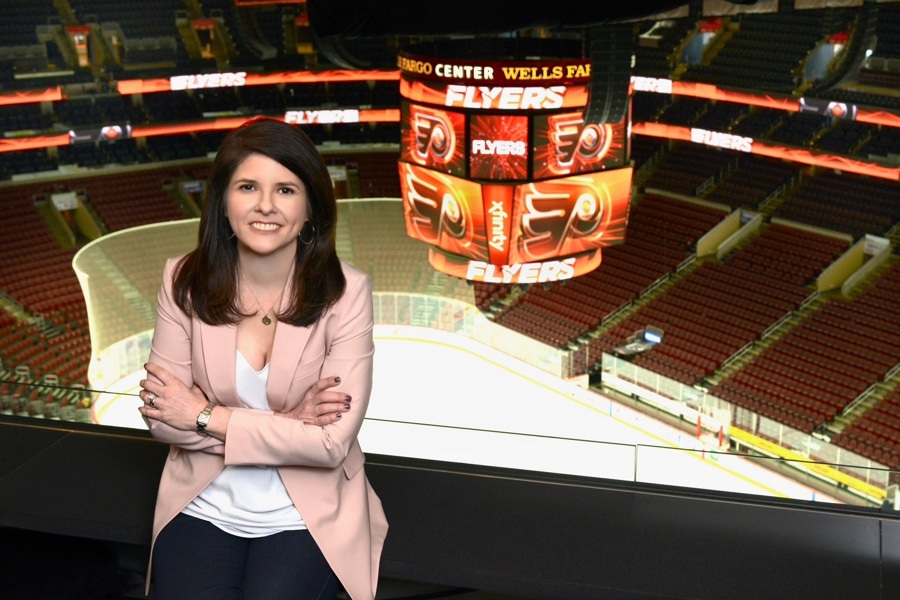 Valerie Camillo moved to Philadelphia just three months ago, and she settled right into the core of the city—its booming sports scene. Camillo is now the president of business operations for both the Philadelphia Flyers and Wells Fargo Center, after serving as chief revenue and marketing officer for the Washington Nationals. Before that, Camillo served as a senior vice president in the NBA’s Team Marketing and Business Operations group. But the sports industry isn’t where Camillo started out. The executive gives us the lowdown on her winding journey and why working in the sports industry is the fulfillment of a lifelong dream. Plus, the leader explains why her relationship with that famous giant orange coworker is complicated.

I grew up in… in Northern Virginia, in a town called Oakton, which is about 40 minutes outside of Washington, D.C.

I first got into sports business when… I went to work for the National Basketball Association, to lead their team’s data and analytics group in 2010. I was pretty established in my career. I made a late transition into the world of sports. I had been a management consultant for 15 years (at PriceWaterhouseCoopers and Booz Allen Hamilton) before breaking into the industry.

A difficult decision I had to make recently was… leaving my hometown and moving to Philadelphia. In the end, the opportunity to lead an iconic franchise like the Flyers and the Wells Fargo Center was just too amazing to pass up.

In school I studied… finance and marketing as an undergrad. I also got my MBA, both at the University of Virginia.

Working in sports is…the fulfillment of a lifelong dream. 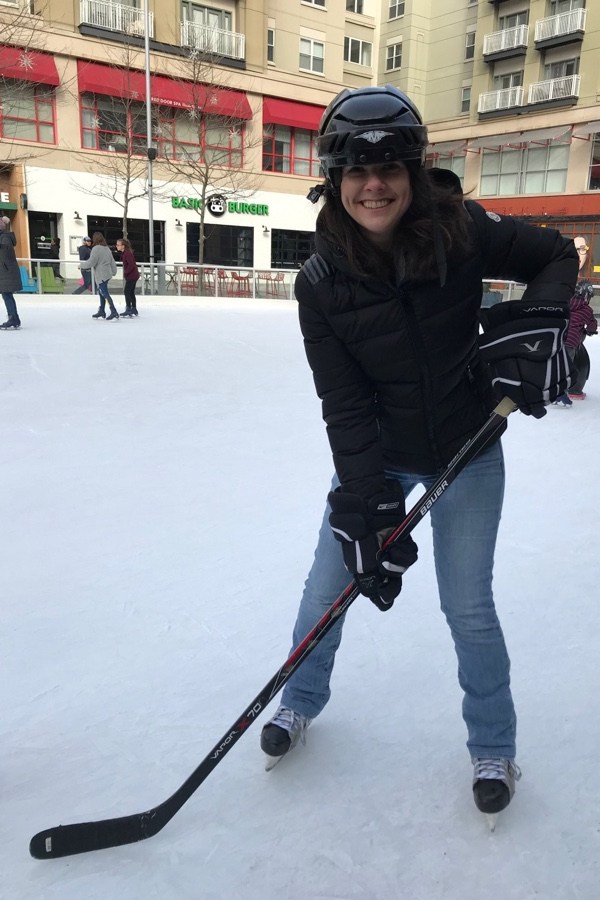 On any given workday I… start my morning by saying a prayer and having a cup of Dunkin’ Donuts coffee. That’s one thing I do every morning. But, because of the scope of my responsibilities, I really do something different everyday. I oversee the ticketing part of our business, the concerts, the corporate partnerships, the marketing and advertising, the sales team, the food and beverage, and the transformation that’s going on here at the arena.

The best thing about moving to Philly was… the restaurant scene. I have also been really surprised at how outgoing and friendly all of the people are. I really love the people of Philadelphia. I didn’t know what I expected, but strangers talk to you here, which is great and not the case in every city. And I love being so close to the beach, which I haven’t really gone to yet since I only moved here in January. But there are so many possibilities for the summer.

Some differences between working with the Flyers versus the Nationals versus the NBA are… When I worked at the NBA, I worked in a league, so that’s a little bit different. It is easier to talk about the difference between hockey and baseball or the Flyers and Nationals. The biggest difference I’ve noticed between the two is that the intensity of each hockey game is off the charts. You can’t look away from a moment of the action or you might miss something. That’s really changed how I spend my game day. I’m very engaged in watching every moment of play.

Something most people might not know about working in the sports industry is that… our busiest time of year is the off-season. I can’t tell you how many times I’ve gotten the question, “What do you do when the team isn’t playing? Do you go into the office?” The answer is yes, absolutely.

The off-season is actually when we do the vast majority of our work other than executing the game. We do the majority of our package and premiums ticket sales, corporate partnership sales, our marketing planning and content development for the next season, concessions concept planning, and the transformation of the arena. It’s in some ways busier than during the season. 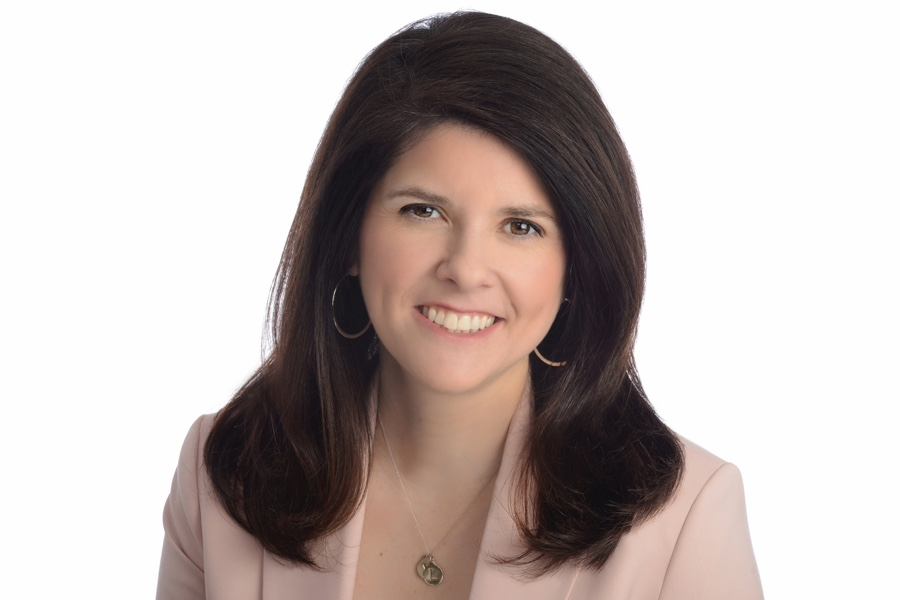 Philly sports fans are… incredibly informed and passionate. You can stop anyone on the street, and they know what’s going on with everything. It’s unbelievable. Never been in a city like that before. It’s awesome, quite frankly.

My relationship with Gritty is… complicated. [Laughs] He’s definitely a superstar. He’s one of the number one things that anyone asks me about. And he may or may not sit on my floor. Therefore, he may or may not often saunter by while I’m in meetings. That tends to be incredibly distracting for people and will stop many a meeting dead no matter how big the person or brand I might be meeting with. The meeting will instantly stop because our conference room has a glass door so you can see him when he walks by. People will want to take selfies. So, it’s complicated.

One of the biggest perks of my job is… having to attend Flyers games, concerts—all the special events that take place here— as a requirement. I’m paid to come to these events.

Gender equality in this industry means… achieving success while getting to be my authentic self.

Advice I would give to young women looking to pursue a career in sports is… stay close to the revenue. It leads to the positions that lead to the top jobs, if that’s your goal.

A personal goal of mine that I want to achieve this year is… setting aside time to work out regularly. This is a lifelong position. [Laughs] I can get easily consumed with work and all these events we have, and I find that the first thing I cut is going to the gym or going for the run. It’s the most expendable, until it isn’t.

The best work advice I have received is… “Be present in every meeting.” What that means is don’t be looking ahead to your next meeting. Don’t be distracted. Focus on what’s in front of you. My mind races very fast, and this is something I’m still working to perfect.

I get really excited about… small things that involve quality time with the people I love. That includes reading the paper over weekend brunch with my husband or going to the movies with my mom.

When I’m not working I… am on the court playing tennis or taking in way too much digital content, whether that be TV or movies. I am currently re-watching some of Game of Thrones. I’ve been even reading the episode recaps. I’m getting ready.

In ten years I hope to… be sitting in my office looking at a picture of me riding down Broad Street in a parade with a team who’s won the Stanley Cup.