I Love My Job: Meet the Woman Scaring the Hell Out of You at Eastern State

Jenny Tomczak shaved her head this season to play Carol, the Queen of Cadavers, at the prison’s Terror Behind the Walls machine shop. 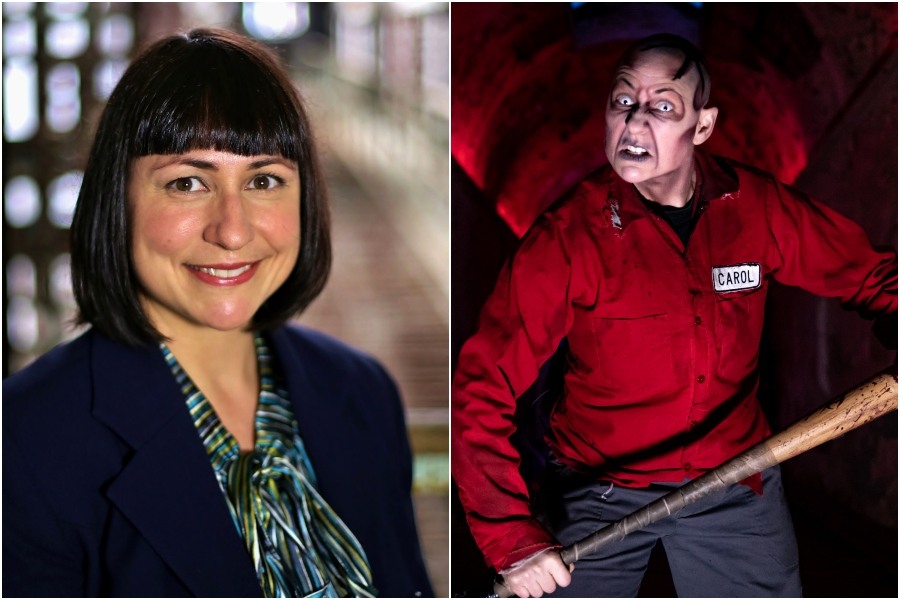 Jenny Tomczak is the terrifyingly dynamic woman keeping Eastern State Penitentiary really scary. After joining the attraction as an actor nearly 15 years ago, Tomczak is now the director of Interactivity for Terror Behind the Walls. That means she pumps up the “terror team” each show night, getting them energized to scare the living daylights out of willing visitors. And bodies do drop, Tomczak explains. Though she’s a director, she’s still an actor and even shaved her head to play Carol this season, the Machine Shop attraction’s queen of cadavers. The leader tells us what it’s like to scare people for a living, and, as her personal therapy. Though the experience is rewarding, work-life balance is not currently a reality for Tomczak, who still maintains a full-time daytime job. Here’s how she does it.

I grew up in… a very rural town just outside of Buffalo, New York. It was a very small, very intimate community. One of the biggest draws to the area was a gigantic amusement park. I started working there in my coming of age years, and it gave me an understanding of what it’s like to [work] in a large-scale entertainment destination.

Now I live in… the greatest city in America… Philadelphia! [Laughs] I’m in Southwest Center City.

I became a Terror Behind the Walls actress in 2004 because… when I moved to Philadelphia after living in Seattle for about seven years after college, I moved right across the street from Eastern State Penitentiary. Everyday I’d look at this imposing castle-like structure on Fairmount Ave. When I found out they transformed this incredible historic daytime museum into a massive haunted house at night, I was hooked!

I found out when the next audition date was, and went straight there in a suit from my insurance day job in corporate America. I screamed and growled and caught the eye of the hiring casting manager, and I never looked back.

Back then, the program was… a leader in the industry but it was a low-gore, high-startle event. I believe it was attracting a good amount of visitors, but they could do better and expand. And back then, the building was in ruin. It sat in ruin for 25 years, so getting the team prepared for events had its challenges. But since then, the terror team has crafted and designed experiences that bring even more people through the door. 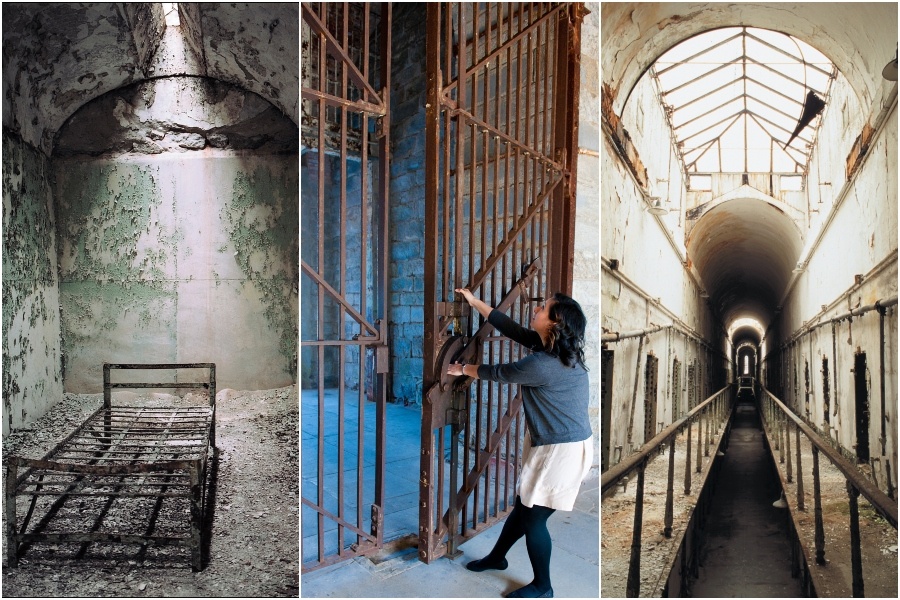 Some big changes include… tailoring the visitor experience, like the ability to have a visitor op-in for a more intense experience that really drives the curiosity and fear factor up. There are a lot of VIP experiences that have been crafted over the years. For example, there is an additional add-on called the speakeasy. It’s this incredible 1920’s lounge with pull-away experiences, blackjack dealers, lounge singers, and the ability to enjoy a beverage near Al Capone’s cell. There is also this incredible upgrade called the VIP tour where you can go through the historic site with flashlights and learn about the building’s history. Then you go through the haunted attraction.

My role with Terror Behind the Walls now is… designed to add to the visitor experience by crafting the small scenes embedded into the six main attractions. I want to heighten anxiety and layer the fear that’s the backbone of the walkthrough. I’m also responsible for managing and motivating hundreds of performers every show night to give the visitors an additional level of scare.

I keep things really, really scary by… getting into the mind of the visitor. No longer can the haunted attraction industry rest on the basic bloody jump scare. That’s the bread and butter of the industry, the startle scare. But if you’re really going to get scary, you need to cater to innate fear. A personalized theatric that can be extremely unsettling, like one-on-one experiences and pull-aways. They continue to add to the storyline of terror and give people things to think about when they close their eyes at night. If you see my face when you close your eyes, I’ve done my job.

Our cast includes…over 300 staff members making the event happen. This includes operational performers, but there are about 200 people in costume and makeup every night and they are a cast of the most dedicated and passionate people you’ll ever met. It’s a fun job, but it’s extremely physically and mentally demanding so you have to have this incredible stamina to get through 32 show nights through the season.

Many of [the actors] do return because it’s a place where you can walk through those imposing gates and transform into your character. Many of them build leadership skills throughout the season in a very unusual setting. I definitely attribute my promotions outside of working at Terror Behind the Walls in my corporate roles to what I’ve gained over 15 years at Terror Behind the Walls. 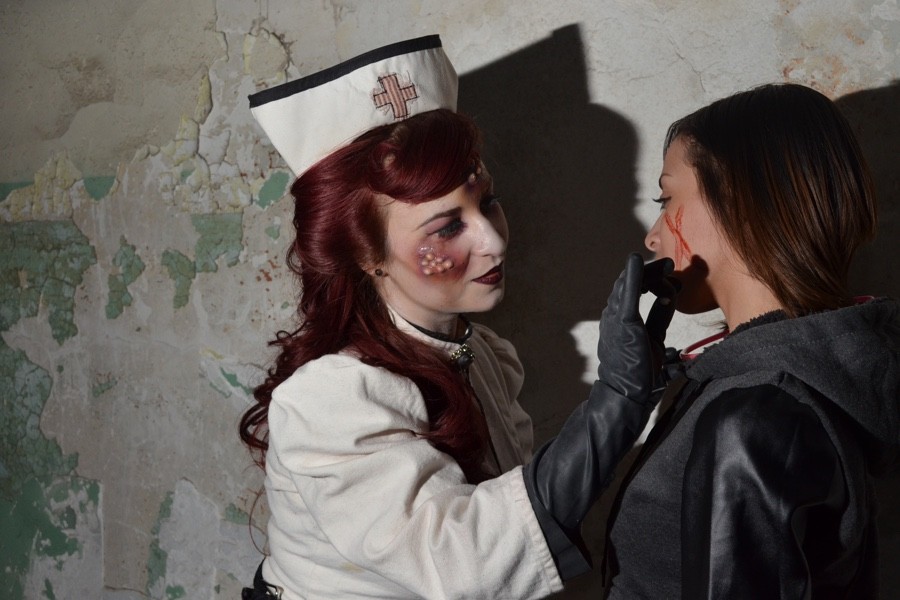 We switch things up from year to year by… working year round to devise new ways to make the event bigger, longer, and scarier by adding new attractions. This year we revamped a very popular attraction — the infirmary. We have taken the fear of hospitals to a whole new level with maniacal surgeons and doctors and nurses. And if you’re not careful, you may become a patient. It is highly interactive and immersive and takes people who chose to opt in to a more intense experience, to another place to another realm.

The craziest thing that’s ever happened at Eastern State under my watch… are the parents who get so scared that they need to leave their children behind. It’s the families where you have eight year olds or ten year olds and adults. Their children are somehow stronger and more fearless than their adult parents.

We often do have people who need to leave the event after the first attraction, which is set in a real cellblock — cellblock 12 — which people say is one of the most haunted areas in the prison. Just last [week] a performer spoke to me about seeing an apparition in cellblock 12 while they were performing. I don’t know. It’s crazy that people choose to leave the event so soon after they’ve entered, but it could be because they feel something or see something that we did not design. 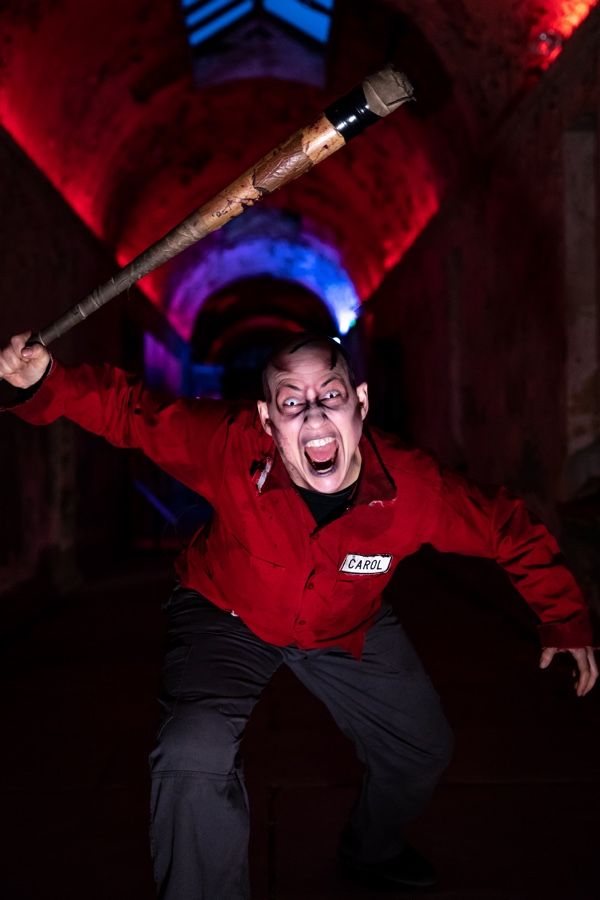 The number of people opting to let the actors touch them… is over half of attendees, maybe about 80 percent of people. But many of them opt-out during the walkthrough. We say if things get too intense and you no longer want to be intentionally touched, just pop off the tracking device that we place around your neck.

The coolest thing about my job is… I transform the minute I walk through the gates. I become my character and get to shed any stress. It’s my therapy. This season I committed to shaving my head. I had a pretty nice head of hair, but about 30 of us committed to going down to the scalp for the machine shop attraction. I’ve had to keep it super squeaky clean, Mr. Bald, for 32 show nights. My character’s name is Carol this year. She’s the Queen of Cadavers.

The toughest part about my job is… work-life balance. The commitment to my role at Terror and performing for 32 show nights leaves my friends and family in a vacancy. Also I have a full-time daytime job that is very important and intense so being able to balance everything outside of Terror and giving 100 percent to those responsibilities is probably the toughest thing. It involves some strategically placed days off at my daytime job to rest and gather momentum and phone calls with my family when I can.

Some of my favorite costumes include… those in the infirmary. It’s these old timey, very period style medical costumes that have been distressed in just the right way to give visitors the idea that these characters have been ensconced in the wall for a very long time. And the costumes in the speakeasy have a 1920’s vibe, with ghoulish characters dressed in suits and flapper style dresses. They are very classy creepy ghouls. 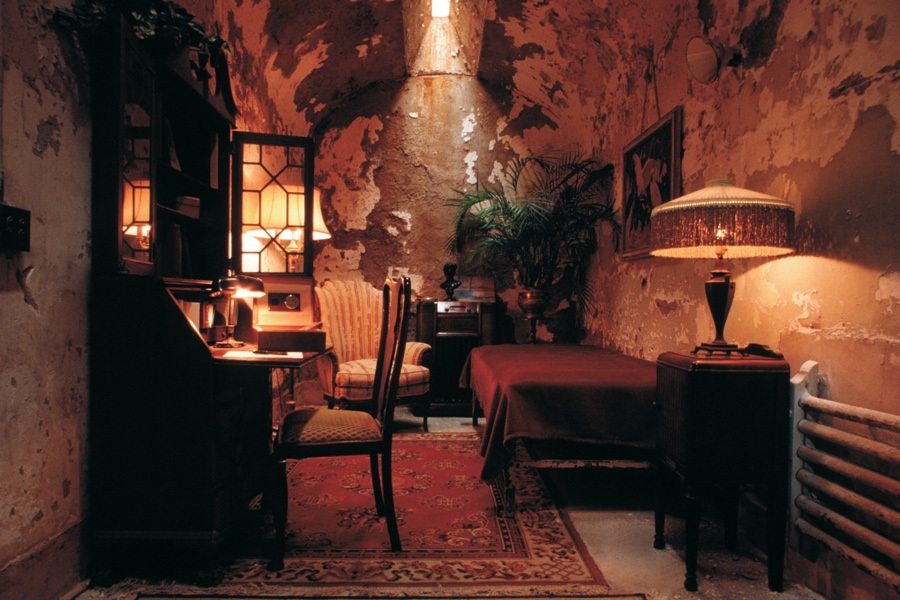 For inspiration… most of the creative team, if not all, goes and visits other similar attractions. There are not many people in this country doing what we do so owners and operators of haunted attractions do get together and rely on each other to determine if we are going too far or if we are not going far enough.

The most scared I’ve ever seen someone was… We have a term for it in the industry: “Dropping Bodies.” It’s a phenomenon where a visitor gets so scared they physically lose the ability to maintain standing so their knees buckle right from under them. It’s definitely something to see. At first you’re like, “Oh my gosh, is there something wrong?” But it’s just their knees buckling. They give way and then their body drops.

Our actors keep count. Their trophies are when visitors pop the tracking devices off their neck. There was an actor the other night who had 80 necklaces. He was pretty proud of that accomplishment.

Last [week] someone was in the fetal position in the blood yard cannibalistic area, and she had to be helped up so she could move along. I think the actors and teams use the stories to motivate one another for the next night.

The greatest horror film of all time is… hands down the 1974 cult classic Texas Chainsaw Massacre. I have quite a bit of memorabilia in my kitchen dedicated to that movie.

I start working… my daytime job anywhere between 7:30 and 8 in the morning. I work all day, stop at about 4:30, then get on a bicycle and head up to Eastern State Penitentiary. By 5:00, I am in costume. At the end of the night, I stay and check in with all the attraction managers and make sure there are no issues that need to be resolved. By the time that happens it’s about 2:00 in the morning. It’s a long but gratifying day. It’s a good two months of the year where I’m burning the candles at both ends like this.

When I’m not at work I… do everything I can to get out and explore the world. I do a lot of traveling. I just went to Japan this year. Unfortunately, they did not have any horror attractions open in March when I was there, but I did seek them out. I love going to beaches, swimming, and exploring the sea. And because we’re always looking to understand the rest of the entertainment industry, I go to large-scale events whenever I can. I go to punk rock concerts, anything that has to do with lighting or design or crowd management. I love to get into the fray. And I love spending time with friends and family.

To the people still scarred by their Eastern State experiences I’d say… take your experience and really think about why it was so impactful to you. Champion that fear. Make it your own. And return to see if you’ve conquered it. That’s immersion therapy! [Laughs]