Quinta Brunson on Becoming an Internet Comedy Star — and Getting Paid

The Philly native on developing for TV with Larry Wilmore, being an Eagles fan in LA, and why you should never talk smack on BuzzFeed around her. 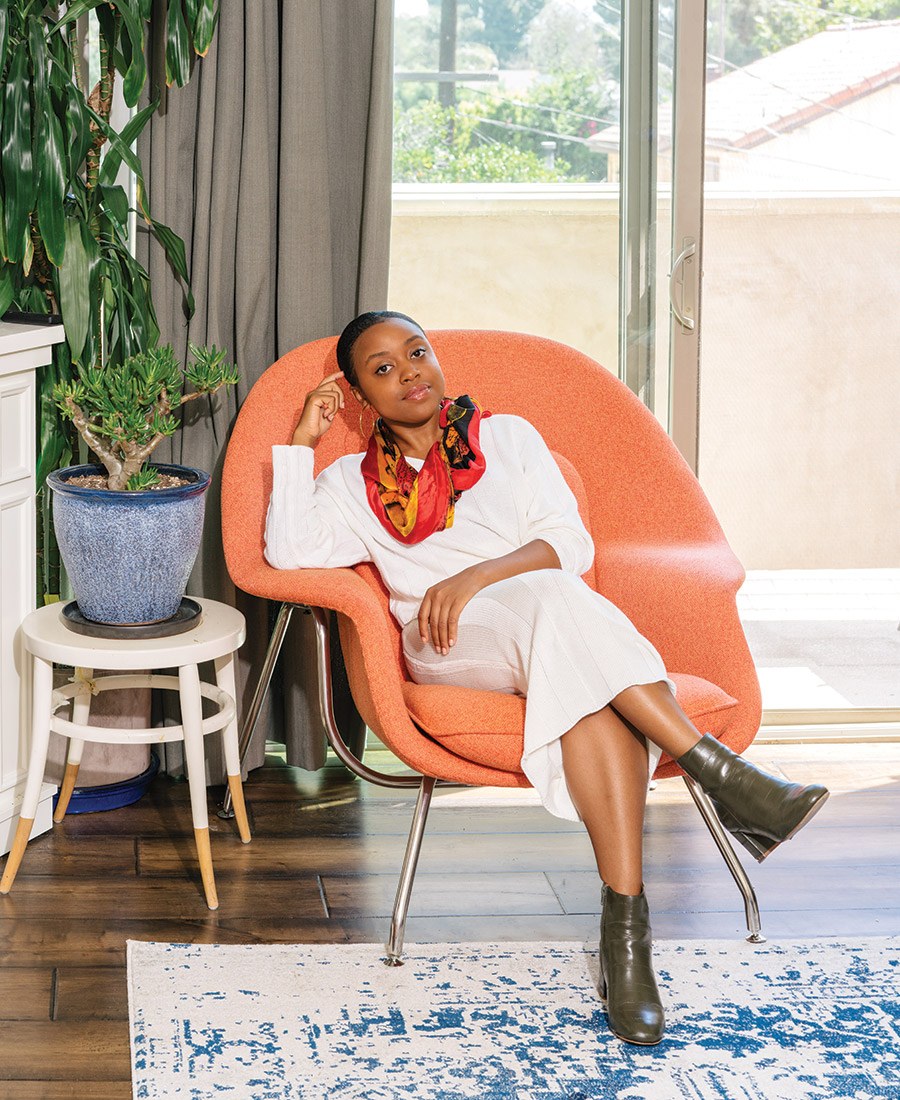 Quinta Brunson knows what makes the internet go ’round. After blowing up many, many times with snappy viral videos that offer hilariously blunt reads on life as a 20-something, (check out her breakout independent series The Girl Who’s Never Been on a Nice Date or the BuzzFeed/YouTube collaboration Broke), Brunson, 28, is pivoting to traditional television. Following a wildly successful stint as a BuzzFeed luminary, she’s seen doors open for her along the showbiz path. Here, the Philly-born internet star explains why she’s determined to hold onto her surprisingly hermit-like inclinations.

I grew up in … West Philadelphia, on 49th and Chancellor.

I always dreamed of being … in some role in media. I knew I wanted to be in the entertainment industry, but I didn’t know in what way. I was too afraid to say out loud that I wanted to be an actor. It seemed like a far-fetched dream for a little girl in Philadelphia.

I attended high school at … CHAD, the Charter High School for Architecture and Design, and college at Temple University.

A big benefit of going to Temple was … being dropped in a world of so many different people so quickly. I got to spread my wings in a way that I’m not sure I would’ve been able to at other schools. I got to join improv club and start up on that part of my life.

I decided to leave college … after about two years. During my sophomore year, I started taking improv classes in Chicago, at the Second City. I had a teacher there — Shelly Gossman — who gave me a scholarship right out of her pocket and said, “You need to do comedy for a living.” So I planned my exit out of Temple, out of Philadelphia, and into my career.

I left Philly because … I didn’t see a future for my career pursuits [here]. My thought was, “I want to do comedy,” like be on SNL. It just wasn’t going to happen in Philly. The city does not lead to the entertainment industry. I felt like I needed to be in one of those cities that treats those fields as a business. Because if not, I wasn’t ever going to make any money. And I wanted to make money. I’m not going to lie.

I went to L.A. … when I took a semester off from Temple. I was like, “I don’t need college anymore. I have enough debt already.”

Repping Philly from afar means … supporting the Eagles. [laughs] It really does. That’s when all the people from Philly in L.A. kind of get together. We all find each other and are like, “Where are you watching the game?” It’s also very much about supporting artists from Philly, artists who are really killing it and are about their work. I want to see them win.

The most unexpected thing about the way my career has taken off is … how there’s this expectation for me to go a certain route. Friends, family, random onlookers would like to see me blow up. I feel like everyone’s expected me to be Kevin Hart. But that’s not a route I really wanted to go, because I’m building a career while still building my life. I want to have a family. I don’t need my whole life to be my job. I don’t want my whole life to be a show.

My favorite thing about the internet is … that everyone has a voice, but that’s a double-edged sword. There are as many positives as negatives. I always go back to the story of this little girl in a war-torn country who was live-tweeting what was going on. That’s the part where the internet will really amaze me. It’s just this live look into someone’s life so far away. And that’s the part that’s really important. … I have fans all over the world because of the internet.

My last pinch-me moment was … talking to Kenan Thompson for the first time. A friend of mine who works at SNL had me talk to him on FaceTime. The entire time, I was like, “Whoa, Kenan Thompson. You are 100 percent the reason why I get to do what I want to do.”

At BuzzFeed, I learned … about the internet as a business. I was independent for a while, but I didn’t enjoy being independently viral. It was too much weight on my back. I wanted stability. I also learned a lot about what comedy does well in other countries, which is something I don’t think people think about in America enough. I learned: the simpler, the better.

Still being associated with BuzzFeed today … I don’t mind it. I just don’t like when people belittle the idea of working there. When I first started booking my stand-up shows, people would be like, “Oh, well, she was at BuzzFeed. That’s not real.” I’m not going to let you be an asshole about my experience. The people I worked with were some of the hardest-working, most innovative people, and continue to be.

The TV shows in my rotation right now are … The Office, on repeat. That’s my favorite show. I watch Insecure and Barry on HBO. I also watch The Good Place.

Transitioning to television has been … interesting. Traditional media moves so much slower than the internet. In the past, if I had an idea, I would shoot it the next day. Also, I was in a pilot for the CW last year that went nowhere, but they spent $7 million on it. It’s so crazy to me to just throw $7 million away.

Some projects in the works include … appearances on the CW show iZombie this fall. I’ll also be on an ABC show called Single Parents this fall. I worked on a cartoon last year with Adult Swim that’s supposed to come out in February. Another show I worked on, Comedy Central’s The New Negroes, is supposed to come out in February. Larry Wilmore, Jermaine Fowler and I developed a show, and ABC Studios bought it. I’m also writing a book, and I’ve developed a movie for a production company. It’s really about working on many things at the same time. It’s fun.

The toughest part about being me is … walking into a room and having people know me already, without me knowing them. It gives me anxiety, and it makes me want to just stay in the house sometimes.

For anyone trying to make it in internet comedy, I suggest you … take it seriously as a business. I’ve seen kids blow up and not have a clue about the world they’re in.

When I came back to Philly this summer … I had a blast. I love Philly in the summer. It’s the most perfect city. My best friend from Temple just moved back there from France, and it felt like we were running the streets again.

In five to 10 years, I see myself … still making shows and finding new ways to tell stories. And, hopefully, with a baby.

Published as “I Love My Job: Quinta Brunson On Comic Timing” in the November 2018 issue of Philadelphia magazine.