The tech founder who’s been called the “The Next Steve Jobs” stopped by Philly last week and said it’s time to build a new pathway. 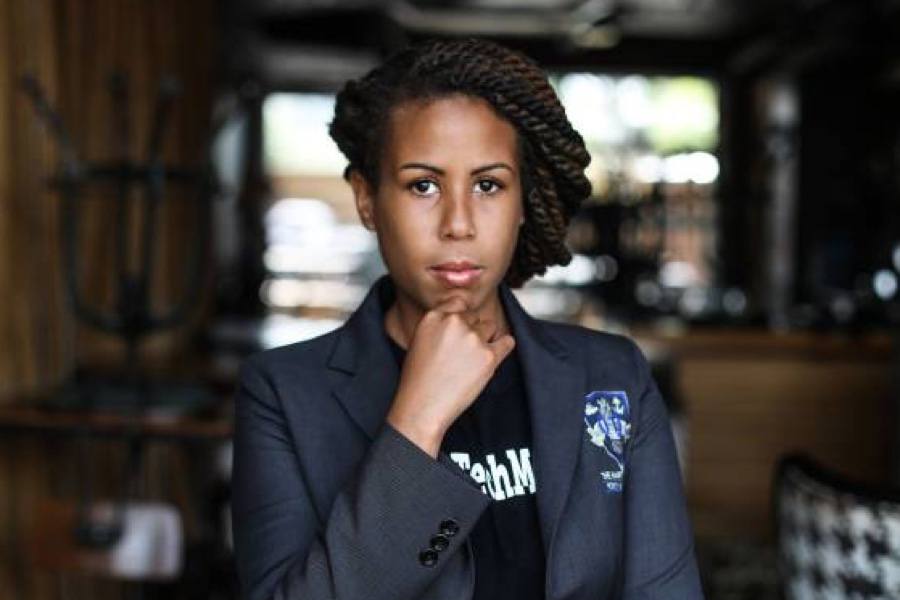 Tech pioneer Angel Rich has been named “The Next Steve Jobs” for breathing life into a movement that seeks to bring financial freedom to those who are often strapped by the ills of debt and poverty. Two years ago, through her company The Wealth Factory, Rich launched a financial literacy game to teach users about credit and personal finance. Within the first two weeks of the app’s launch, it garnered 200,000 downloads. Google named it one of the top 10 apps in the world. And as the author of History of the Black Dollar, Rich, a D.C. native, offers deep historical perspective that explains why financial literacy can do a lot to change a city like Philadelphia.

Rich stopped by the City of Brotherly Love and Sisterly Affection last week to keynote the 4th Annual Women in Tech Soiree during Philly Tech Week. I caught up with Rich to learn more about her journey as a founder and why she thinks black founders should begin constructing an Underground Railroad.

BizPhilly: Tell us a little bit about your path and how you came to be called “The Next Steve Jobs.”

Rich: When I traveled the country, it always boggled my mind to see that black people didn’t know how to manage their money. That motivated me to become a global market research analyst with Prudential. There I authored the first-ever African American financial experience study, and I led the Obama Veterans Initiative research study. In my very last year, I made the company six billion dollars by changing around problem resolution standards.

From there, I had the fortunate opportunity to be able to start my company, where we decided to create financial literacy education technology games. Essentially, the games walk people from birth to retirement through 12 interactive modules. We have a curriculum that goes along with it that has been adopted by the Department of Education. The first game, a mobile game that we released in 2016, is called Credit Stacker. It’s similar to Candy Crush, but instead of swapping around candy you swap around credit types to be able to pay off your debt, achieve a high credit score and learn from the multiple choice questions. We’ve been named a best financial literacy product in the country by the White House, the Department of Education and J.P. Morgan Chase. Google named us one of the top 10 apps in the world. And recently, Google inducted us into their accelerator and their Top 50 Apps department so we have double support from Google now, and we’re very excited about it.

BizPhilly: That’s impressive! And along the way, you haven’t been quiet about the challenges you’ve faced as a black woman in tech trying to raise money and launch your own business. Can you talk a bit about that?

Rich: Definitely. I’m actually a very quiet and shy person but what brought me out of my shell about this was a conversation I had with an Asian gentleman at the capitol where we were on a panel together. Before this conversation, I had previously thought myself as a regular ol’ entrepreneur. But he said to me, “Hey, Angel, I can’t imagine how it is being a black woman running a company.” And I was like “What do you mean? What are you talking about?” He told me that when he started his company, people just started writing him checks because they assumed he would be successful because he’s an Asian male. And he said, “I don’t even know what I’m doing. I’m really not sure what I even plan to do with the company and quite frankly, I want to shut it down.” And he said, “I stay up at night because I don’t want to lose their money.”

And he kept going: “You, on the other hand, are one of the smartest people I’ve ever met, but every room you walk in you have to constantly prove yourself. And there’s always a hand in your face telling you to leave or go away. And you have to literally knock down every single door to enter and figure out a way to stay in the room unless you get inside.”

I had never realized that before. I thought that I was facing the normal challenges of being an entrepreneur. I did not realize that the average amount of funding for a regular startup was $1.1 million, and we were sitting there struggling to try to get $10,000. I had no idea that only 0.2 percent of funding was going to black women.

So after that conversation, coupled with a meeting where a bunch of other black tech founders came together and we realized we all had the same issues, I decided that as a researcher, and someone that was speaking from the unbiased and kind of objective point of view, that it would be great to share this story. And then that received even further support from Forbes Magazine when they named me the next Steve Jobs.

BizPhilly: Philly is a very black city but you wouldn’t know it looking at the tech scene here. And overall, if you look at business ownership across the city’s downtown, for example, you would have no idea that people of color live in the city. What are your thoughts on this?

Rich: This relates to something I talk about called financial agriculture. In agriculture, you’re required to rotate the crops in order to maintain a good crop. Otherwise, the crop becomes dependent on the surrounding nutrients and then the nutrients it actually takes to grow that crop tend to dissipate. And the next thing you know, ten years from now, you’re not going to be able to grow a good crop.

It’s the same for financial agriculture where we have to rotate the culture within cities to produce different and better financial crops. Otherwise, the resources, for example, black people, get used up and drained. We start to cannibalize each other and we turn on each other. We have weeds growing. In looking at cities like Miami, New York and Los Angeles that have a high degree of financial agriculture and a high degree of economic development, I’ve concluded that the solution is that the people in charge of the city have to be from the original culture. 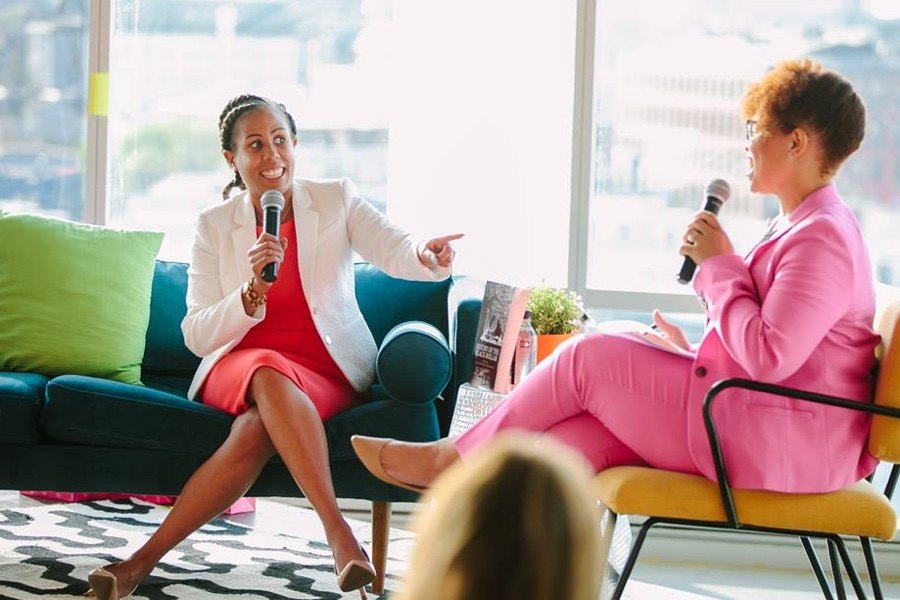 BizPhilly: And how do you see this playing out in all the cities you’ve mentioned?

Rich: In Miami, New York and Los Angeles, the culture has always maintained control of their city so that when financial agriculture comes into the city, it has to fold into their culture. Their culture doesn’t get taken over. But if we look at D.C., Philadelphia, Baltimore, St. Louis and even Atlanta, the culture is not in charge of the finances or the politics. If the culture isn’t in charge of the finances or politics, you’re going to have a city that dissipates or is in severe need of gentrification. It will ultimately lose its culture, like Chocolate City, D.C.

BizPhilly: From your time studying and visiting Philly, do you feel the culture is leaving or do you see Philly as a place where the culture is still rich?

Rich: I’ve been loosely studing Philly since about 2004 and heavily studying it since 2009, since it was one of the four cities that I looked at for the African American financial experience report. What’s interesting about Philly is that it is second in black education, second in black wealth, and first in culture. I thought that was really interesting from a qualititative perspective. When I drive around Philly neighborhoods I notice that that even in the hoods they have flowers outside of their windows. Now what does this mean? When you go to other cities and you go and visit the hood, you don’t see neatly cut lawns and flowers outside of the windows. Even in the most desperate situations in Philadelphia, people still have pride in their community, and they still have pride in their culture. There is a hope in Philly that doesn’t exist in many other cities.

I feel like Philly is carrying the black soul right now, and it’s lost in D.C. and Atlanta because we’ve been gentrified and to me, Philly is one of those, probably last Mohicans. We have an opportunity that if we were to merge the startup ecosystem properly with the financial and the political ecosystems, as well as the education systems here, we could possibly save the entire black culture for the city, as Philly did to begin with out of slavery, so it kind of all circles back.

BizPhilly: Speaking of merging, a lot of analysts say Philly’s best bet for being able to compete in the 21st century is to connect, or “connect to compete.” So linking various stakeholders in the city around common goals can help Philadelphia rise. Do you see this as the ultimate solution or even a first step?

Rich: I don’t really feel like the answer is “connect to compete.” They did that in D.C. They did that in Atlanta, in Baltimore, and in Boston. It doesn’t work. That’s not the answer. When you connect to compete, you leave people out. What happens is you build an upper circle of people that other people cannot enter. And most of the time that circle is formed because you were there, or you were there in the beginning, or you knew somebody.

In D.C. we’ve realized that it’s not about the circle and connecting. It’s about the pipeline and the pathways because when you build a circle, you block off the pipelines and the pathways. And it’s really about figuiring out those lines. For example, I realized that TD Bank is really big up here, so what needs to be happening is TD should be connecting with financial literacy companies. And to take things a step futher, we can have CRA money redirected to schools to create inherant financial literacy programs. This is just one example of the kinds of things that need to happen.

BizPhilly: What’s your message to black founders in the Philadelphia region who might be struggling to raise money right now?

Rich: My message is to be a Trojan horse. I usually say this to women, but in this particular instance, I mean it to the black founders because, once again, we’re in interesting times where we have to be woke, but pretend to be asleep. My grandmother used to say, “Don’t let your left hand know what your right hand is doing.” That’s what Philly and the black founders in Philly need to do right now. They need to come together and develop a plan of action with key stakeholders actually attached to it as to who’s going to do what to not leave anybody out. It needs to feel inclusive. But then pretend to be asleep because you can’t announce the Underground Railroad.