Here's what the storied Diversified Search founder would rather spend her time doing. 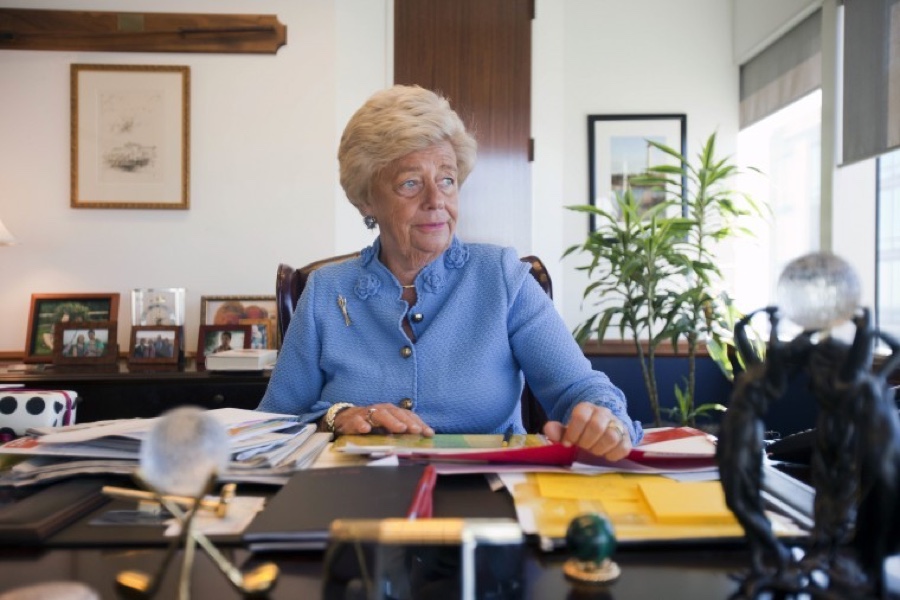 Judith “Judee” M. von Seldeneck knows how to spot leaders. She’s been doing it for 40 years, and companies across the globe have been touched by her firm Diversified Search, where she’s currently chairman. They’re located in 30 countries and 60 cities around the world today, and Diversified Search has identified leaders for Fortune 50 companies, nonprofit organizations and everything in between. But the process isn’t as easy as one might think, von Seldeneck says. While she’s been named one of the world’s most influential executive recruiters, von Seldeneck explains why she’s still paranoid about the firm’s reputation. If you’re curious about the one item von Seldeneck always keeps in her bag, why she doesn’t read fiction, and the most expensive thing she’s ever purchased, keep reading.

I grew up in… High Point, North Carolina.

Something I miss about the South is… the laid back, fun-loving way of life that is filled with humor and genuine caring . It’s a really unique culture. I try to get back there, and I still maintain a close relationship with my college roommate. She’s still my best friend. She runs a designer dress store in Winston Salem and she’s been sending me all my clothes for the last 30 years.

I came to Philadelphia because… I decided to get married, and my husband lived in Philadelphia. I figured I’d give it a shot. I had been working in Washington for Walter Mondale in the Senate.

I got into executive search… really by accident. I was looking for something to do. Rizzo was the mayor. Politics was out of the question for me. There were only a couple of women in politics. It was at the height of the women’s movement.

I became the fourth partner in a little business that involved job sharing for mothers that were home taking care of kids. I did that for a couple of months then bought the partners out for $1,000 each. I started a business that focused on finding full-time, permanent professional jobs for women. It was a niche thing. I thought it would be fun to try it, and it ended up working. 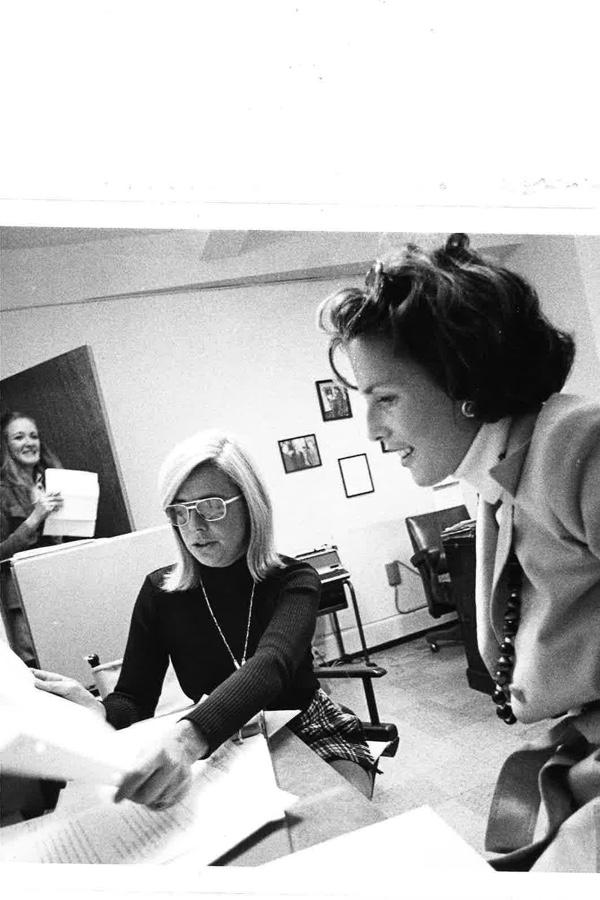 An archival photo of Judee and co-workers when the firm was originally founded as DivStaffers.

Starting a business in the 70s was… a no-brainer for me. I was fortunate doing it in Philly. I more or less backed into it. Philly at that time just seemed to be a really good place for someone like me to start a business like this.

The next book I plan to read is… Walter Isaacson’s Leonardo Da Vinci. I don’t know anything about art, so I figured I’d read this thing. It is the fattest, heaviest book I’d ever read.

My day typically starts at… 6:30 AM. I love the mornings. That’s when my brain seems to be at its peak and slowly digresses as the day progresses.

My morning routine involves… reading three or four papers (the Philadelphia Inquirer first, then the New York Times and the Wall Street Journal). I drink coffee and sit in my bathrobe and enjoy the morning. I plan my day and review my to-do list.

I don’t like to talk about my age because… no one is ever asking men what their age is. When I’ve been interviewed for articles and they ask me my age, I say, “I’m not gonna tell ya.” When you get to be my age — and I’m not a spring chicken, I’m a seasoned rooster — people will say, “Oh my gosh I had no idea she was that old.” They don’t want to necessarily get into a business relationship with you. They think you’re not going to be around as long as they are. Our business is about relationships, so if they think I’m some old coot, it’s going to hurt our ability to make certain relationships. So, I dye my hair and aspire to look like Jane Fonda at 80. Did you see her at the Oscar’s? She looked 50, and she’s 80! She’s drop dead gorgeous and still involved and articulate.

The Philly restaurants in my rotation right now are… the ones that are quiet. Where you get good service and good food and you can have good conversations. I like Butcher and Singer.

If I stayed working in politics in D.C., I’d probably… enjoy being in the public light running for office. I don’t like to lose, so I’m not sure I would’ve exactly had the courage. But I left back then because there was nowhere to go in politics for women. The glass ceiling was rock solid.

A big lesson I’ve learned about leaders from searching for leaders is… they’re a lot harder to spot than you think. And you really have to dig deeply and do this quickly because clients want it figured out. It takes having met hundreds of people over the past 40 years that you get instincts about it.

I’m not involved in every search because… we have hundreds of searches going on at any given time. We’re in 30 countries and 60 cities around the world. It wouldn’t be possible. But I take a particular interest in the ones that are in Philadelphia, the ones that are high profile and could be tricky. I still come to work for full days and know what’s going on. But other people run day-to-day operations. I’m so paranoid about our reputation and the quality of our work that I’m known to swoop down and get involved if I hear there’s a problem.

The hardest part of my job is… telling candidates that came so close to getting the job that they lost out by a whisper to somebody else. It’s hard to help them understand that and not have it be a big traumatic experience for them.

The most fun part of my job is… going out and making pitches to get new searches, where you have to compete with other firms. It’s a key piece of what we do. It’s hard to not take it personally if you don’t get these searches because you’re really putting your heart and soul into it. 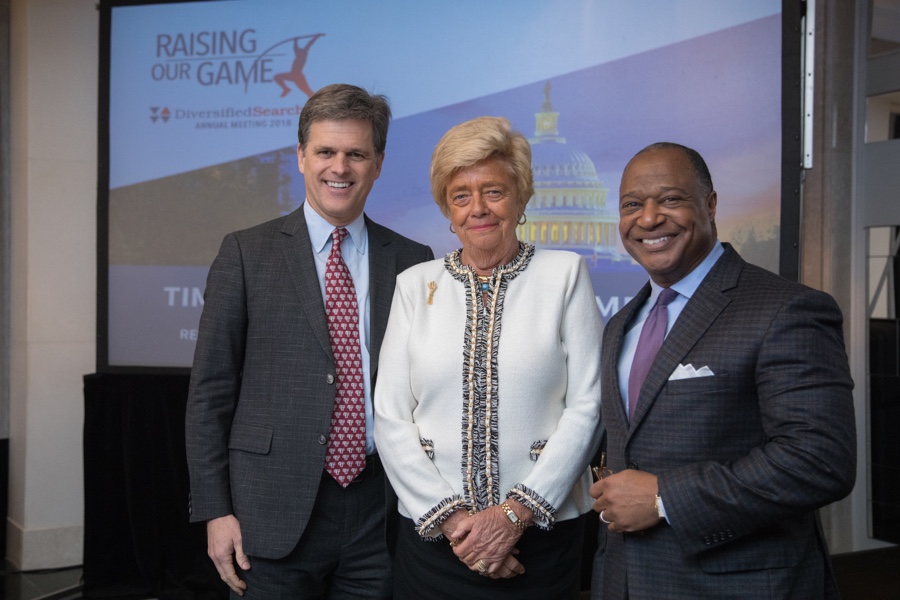 Judee with Tim Shriver (L), the CEO of the Special Olympics, and Diversified Search CEO Dale Jones (R) at the firm’s annual meeting in January.

That time I sold my company was… one of the best decisions because we learned a lot and gained a lot. The good side was that we were part of a public company and had access to resources that enabled us to expand much faster than we would’ve been able to on our own. The bad news was we were starting to lose control of our destiny and how we wanted to grow and develop our firm. Losing control became the real challenge. That’s why we bought it back.

To relax… I drive my boat. I have a captain’s license, which you need in New Jersey. I used to do a lot of fishing, but now I just like to go out. We have a house in Naples, Florida, and I love to go out in the backwaters and see all the birds and all the beauty.

To me, feminism is… being proud to be a woman and helping create a level playing field in terms of equal opportunities, irrespective of gender. I have passion about that. My approach to feminism in the days when I came along — when the women’s movement was beginning in the late ‘60s and early ‘70s — was that there were effective ways to get the boys to like you and want to work with you. There were radical feminists. I wasn’t one of those.

I draw a line between radicalism and effectiveness… because I felt like the radical feminists did some things that went too far and bordered on tastelessness. They were out burning bras, for example. I felt like that was just going to irritate everybody, but it also got a lot of attention. So you have to give them some credit for that. It was so outrageous that it got everybody’s attention. There’s a lot that we owe to the generation that did that.

Something that strikes me about the #MeToo movement is… that it’s not going to go away, at long last. These movements have come and gone. I’ve seen them my whole life. I feel like there is no way that this is going away. This whole disrespect of women has been going on for a long time and now we are seeing repercussions in both the political and business worlds. It doesn’t matter how long ago it was.

I’m happiest when… I’m sitting around with friends in the sun and sipping chardonnay by the water. I love the sun. I like to sit in the sun, whether it be in Naples or Cape May. It energizes me. It destroys my skin, but I don’t care. I keep telling people these are character lines. [Laughs]

And if my friends aren’t around, I like reading great nonfiction. I think reading fiction is a waste of time. I don’t need fantasy. I can watch television, which I don’t do much. I love to learn. That’s why I’m reading this book by Walter Isaacson. Time is short and valuable. I don’t like to waste it.

The most expensive thing I’ve ever purchased is… truthfully, just a few months ago, I purchased part ownership of an airplane. 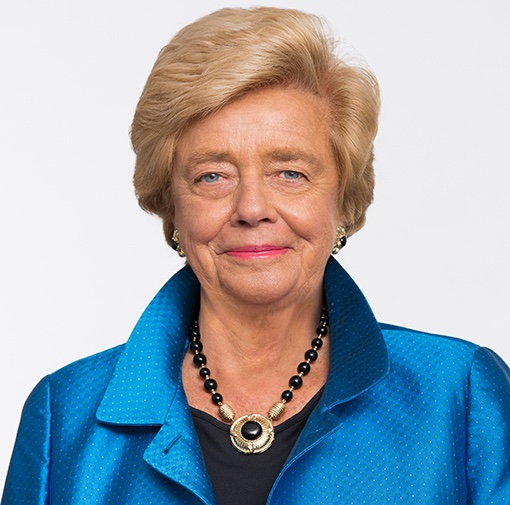 A place I dream of traveling to one day is… I have traveled most everywhere in the world. So, the answer to that is heaven.

I wish I had more time to… spend time with my friends from the south.

Diversity in the executive search… is like the #MeToo movement. It’s here to stay, at long last. Diversity is becoming a given now. It used to go in cycles. In for a while, then out, and then back in. I think a lot of that is because of these younger generations coming along. They’ve grown up in different culture, and they’re bringing that into the workforce and workplace. If you told me 40 years ago we’d still have these ridiculous statistics today, I’d say no chance. It’s been a much harder and longer struggle than I think we had envisioned.

An item I always keep in my bag is… a Butane curling iron for my hair so I always look good. I try to make sure every hair is in place before I go to an important meeting.

My most significant career accomplishment is… buying back Diversified Search and hiring our new CEO four years ago who’s been phenomenal.

In ten years I see myself… sitting by the side of the bay. Who is it that said that? [Laughs] I guess I don’t really see that. I see myself still fully engaged having started a foundation and helping to fund women entrepreneurs. I can see myself involved in politics to help good politicians win elections. I want to enjoy life too. Do the right kind of travel with friends and family. I’m done with stress. I don’t do stress anymore. The sooner you can shed that as an activity, the better you are.