For Marc Lamont Hill, a Labor of Love in Germantown

Uncle Bobbie's Coffee & Books is at once an extension of the activist-scholar's personality and a tribute to the man who taught him how to love the written word. 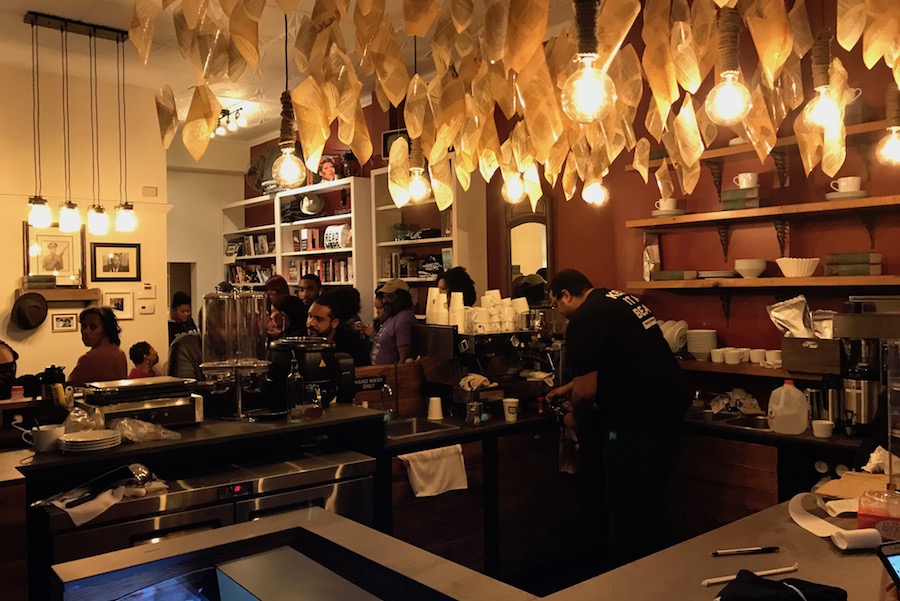 Inside the main space at Uncle Bobbie’s. | Photo: Sandy Smith

The good people of Germantown have devoted much time and effort to restoring the faded glory of this historic and diverse neighborhood.

The latest Germantowner to contribute to the effort is Temple University professor and CNN commentator Marc Lamont Hill.

His new community hangout, Uncle Bobbie’s Coffee & Books, opened Monday (Nov. 28th) to a steady crowd of friends, well-wishers and neighbors who came by to check out the neighborhood’s newest nice thing.

Part living room, part library, part coffee bar, part eatery, Uncle Bobbie’s invites patrons to stick around a while, the better to consume food for the body and the mind — and to commune with neighbors.

It’s Hill’s hope that his new establishment will stimulate the same love of books, learning and conversation in the community that his own family stimulated in him. Especially his Uncle Bobbie.

A reader learns how to read critically

“I’d grown up in a family that valued reading, and early on, I read everything I could find,” Hill says. “Like the old Dick and Jane books — they instilled in me a value and a passion for reading.

“But then I’d go to my Uncle Bobbie’s house when I was four or five, and he’d say, ‘Those books are cool, but read this!’ He’d have Ebony, Jet, Black Enterprise — these were so different from the People or the Time or the Reader’s Digest that I was seeing in other places.

“And then he would hand me these books, and we would watch television, and when the politicians or the newscasters said something, he would say, ‘Yeah, that ain’t the whole story, Mark,’ and then he would talk to me. So this idea of critical literacy, of using the word as a way of understanding the world, was something that he instilled in me early on.”

Hill sees Uncle Bobbie’s as not only honoring his uncle’s legacy but carrying on a tradition he learned about in the bookstores he visited in his teens — both black-owned bookstores liked Hakim’s on 52nd Street and the still-extant Black and Nobel in Tioga and bookstores like Robin’s in Center City where he could find extensive collections of African and African-American books. “So when I got the chance to actually open a bookstore and continue that tradition, I said, ‘How could I not?’

“My dream has always been to do this. Market forces make it hard, but I have had an abiding faith in black people. That we will support each other, that we will care for each other, and that we are interested in knowledge.”

Hill’s aim is to welcome everyone in Germantown who shares that desire for knowledge and community, regardless who they are, into his space. Which, he says, is why he is thrilled to have found the storefront he occupies at 5445 Germantown Ave., across Church Lane from the historic town center, Market Square. “I could not have dreamed up a better situation,” he says. “I’m right next to the Germantown Historical Society, which is next door to a black megachurch, which is across the street from a Quaker school, which is next to a drug rehab facility, which is up the street from a charter school. That’s Germantown.”

Something the neighbors will appreciate

But another reason he chose this corner is because Germantown has been his home for the last 13 years. “But beyond that, I wanted Germantown to have nice things,” he says. “Too often, we don’t find the nicest things in neighborhoods that include black and brown folk, that include working-class folk. So I wanted to create a space where black and brown folk, working-class folk, young and old people, could all come together.”

So does this make this chill space a harbinger of gentrification in Germantown? Hill, at least, might reply in the negative. As Oakland political consultant Darnette Lambert says at the start of “Gentrifier,” the book Hill co-wrote with John Joe Schlictman and Jason Patch, “What people don’t seem to realize is that it isn’t the mere act of moving into a neighborhood that makes you a gentrifier; it’s what you do once you get there.”

The community certainly understands the difference. The news of the shop’s opening generated lots of positive buzz on the neighborhood Facebook groups, and the opening-night crowd included a cross-section of the neighborhood. It probably didn’t hurt that all but one of the shop’s ten employees resides in Germantown too. “I’ve gotten support from the community, I’ve gotten support from the residents’ associations — I even got support from the Germantown Espresso Bar,” Hill says. “Instead of seeing it as competition, we both thought about it as ‘Let’s work together and make something great.'”

Which brings us to the coffee. La Colombe supplies the café’s potent house brew, and the menu also features specialty coffee drinks, a global selection of teas, and pastries, soups, salads and sandwiches made fresh by the staff, including vegetarian options.

The café is as central to the operation as the books are. “I knew I needed something to bring people together besides books — not because people aren’t literate or engaged, but because there are other ways to get books,” he says. “So I said, ‘Coffee! Coffee unites people.’ I’ve traveled around the world, and I’d be sitting in a coffeehouse, and I’d see people sitting around for days, or what felt like days, and the only thing that’s binding them is that coffee, and then the conversation comes. In a bookstore, it’s the book, and then the conversation comes. So you give me coffee and books? I might have a fighting chance to engage some folk.”

Those comfortable couches in the front and back rooms ought to help things along too.

Books from across the spectrum, with a black accent

The book selection includes titles for everyone from tykes to old heads. The children’s section features books that affirm every child. The fiction section features works by African and African-American authors both noted (James Baldwin, Zora Neale Hurston) and popular (E. Lynn Harris). Hill is a man of the left, and the politics, history and economics sections reflect that, but as befits a former Fox News regular, one will also find classics that include Adam Smith, Plato and Socrates, and works by conservative authors, some of whom have Issues with the state of conservatism today.