The nonprofit used a new computer science and programming curriculum to instruct the middle school girls this time around. 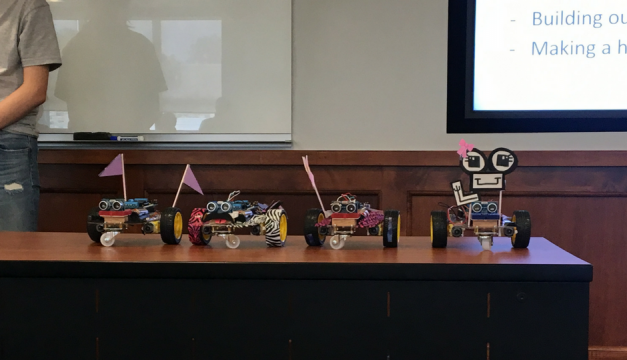 TechGirlz wrapped up its annual summer camp on Friday, after an intense week of learning with a brand new tech curriculum this year. Nearly two dozen middle school girls gathered at Villanova University’s School of Business on Friday to show off a fleet of robots they coded and built.

This was the first year TechGirlz has focused on computer science and programming during the summer camp. Since Tracey Welson-Rossman launched the nonprofit in 2010, with the mission of empowering young girls to utilize technology confidently in their future career, the summer program has focused on marketing and tech entrepreneurship, culminating with a business pitch competition.

“Young girls are already thinking this way. But we’re not allowing them to think this way,” Welson-Rossman told me. “We as a society need to understand that girls – young women – should be part of the innovation economy. And we’re turning them away.”

The biggest drop-off for interest in computer science for young women occurs between the ages of 13 and 17. This fact illustrates the value in making computer science more accessible to girls, Welson-Rossman said.

On Friday, campers had an opportunity to explain in detail how they constructed and programmed their robots, to an audience of parents who looked lost but proud. And following presentations they showed their robots, which were programmed to use their cars’ sensors to navigate obstacles on the floor.

After seven years in operation, the TechGirlz community Welson-Rossman has built is larger than ever. “We have some of our first students starting college in the fall,” Welson-Rossman said. “And for all the girls – they know that we’re here. And they can come back, and they can ask us for support. As we see more of these girls growing up with us, we’re going to be there for them.”

Second-year camper Lily Schwalb is among many who already look up to the TechGirlz leadership. “I think it’s great to see female role models who have already achieved their goals in technology,” said the 13-year-old musician who is homeschooled. “You hear about so many male figures in technology, but there are a lot of powerful women out there.”