Hundreds of professionals flocked to the city this week to discuss how LoRa technology can advance urban innovation. 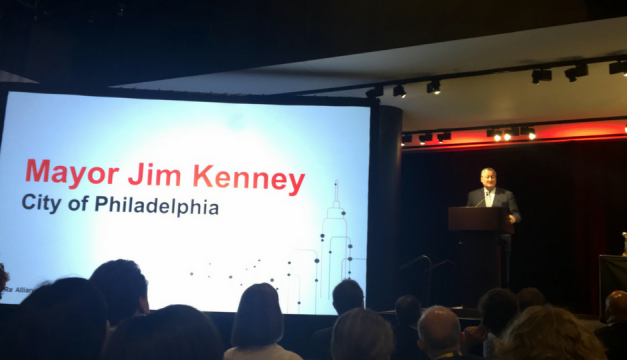 This week Mayor Jim Kenney welcomed representatives from tech and other industries across the globe to Philadelphia at the Smart City Summit, the culmination of a packed week of industry events hosted by the LoRa Alliance and Comcast’s machineQ. The summit followed up the 8th LoRa Alliance Open House & Marketplace, which showcased some of the world’s top data technologies.

While addressing attendees at the Franklin Institute, Kenney, who continues to show his support for Philadelphia’s growing technology scene, highlighted the importance of making the city’s growing innovation space inclusive and accessible.

“Philadelphia is the poorest big city in America,” he said, encouraging tech leaders to act as mentors for future innovators in Philadelphia’s schools. “Over the next thirty to forty years, unless kids in our struggling neighborhoods have access to technology and innovation, that poverty needle will never move.”

Kenney’s Rebuild program, which would renovate the city’s recreation centers, libraries, and city parks, will be an opportunity for the city to integrate technology into those spaces. The $500 million program was approved by Philadelphia City Council on Friday.

The week of Smart City events kicked off last weekend with machineQ’s Smart City Hackathon, which gave teams of developers a chance to experiment with Philadelphia’s new Low-Power Wide-Area Network (LPWAN). The network, which utilizes technology developed by the LoRa Alliance, will allow programmers to collect and transport data from physical objects across the city using a variety of cleverly programmed Grove sensors.

The winning projects at the hackathon, including Noise Sniffer, a product capable of monitoring noise levels in parks and other city areas, and LoRoad, which uses Grove vibration and GPS sensors to track the locations of potholes, are just the first glimpse of the types of smart solutions Philadelphia will see as the use of LoRa technology expands.

Local architect Evan Oskiero-Jeznacki, who worked alongside a programmer to build the bridge stability tester Viewpoint at the hackathon, was one of a number of first-time hackathon competitors who told BizPhilly that they’d been drawn to the event by the unique technological  possibilities provided by LoRa and machineQ. “It’s hard to measure the status of a bridge and test its viability,” said Oskiero-Jeznacki. “With LoRa, we think we can collect stability scores from Grove sensors – used to monitor exterior conditions like temperature and moisture and collect accelerometer data – so that we can catch problems in bridges early on.”

A few days before the summit, the Knight Foundation announced that it will be awarding the city of Philadelphia a $338,000 grant to fund urban innovation in the city’s PHL Participatory Design Lab. Philadelphia’s chief information officer, Charles Brennan, also at the Smart City Summit, addressed the city’s plans to use the grant as effectively as possible, rather than “sprinting out to build a million applications.” The success of Philadelphia’s LoRa-powered projects, said Brennan, will depend on developer’s abilities to build and utilize a mass collaborative data collection, rather than building isolated projects and wasting time on redundant designs.

Brennan encouraged the crowd to approach smart city efforts as a collaboration between public and private sectors, a pattern that he hopes will allow Philadelphia to become a national leader in technology. “If you can make it work here,” said Brennan, “you can make it work anywhere.”