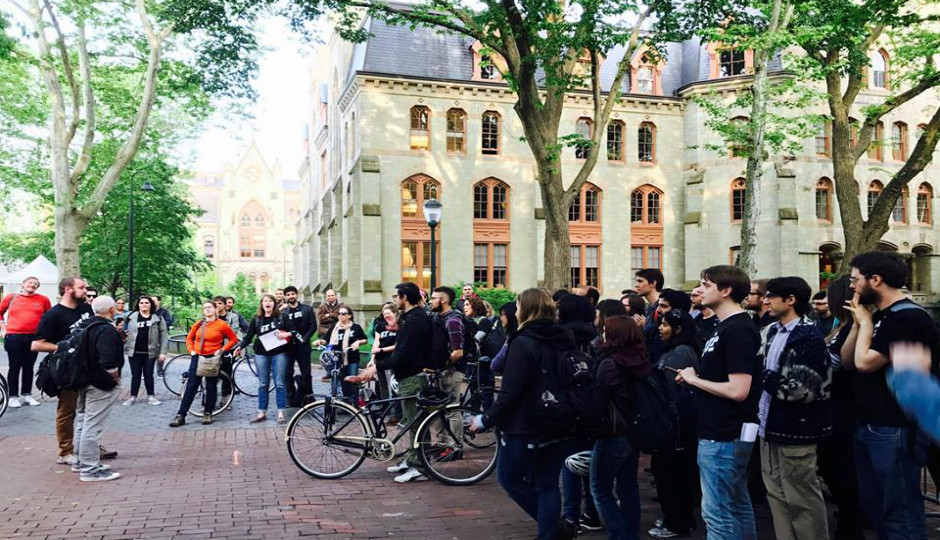 GET-UP members rally on Penn’s campus on May 9th. Photo courtesy of GET-UP

Graduate teaching and research assistants attempting to organize a labor union at the University of Pennsylvania filed a petition for a recognition election with the National Labor Relations Board (NLRB) on May 30th, hoping that the vote can be completed and certified before President Donald Trump and Senate Republicans can reverse a less-than-a-year-old ruling that granted them the right to do so.

Graduate student groups at private universities across the country are facing the same dilemma. The movement at Penn is being led by a coalition of graduate student workers known as Graduate Employees Together – University of Pennsylvania (GET-UP). GET-UP’s leaders first explored the possibility of unionization in fall 2015, inspired after New York University in 2013 became the first private university to recognize a graduate employee union voluntarily. NYU is currently the only American university with a graduate union contract.

A wave of new student unions was expected to follow in Columbia’s wake, including Penn’s. So how can Trump get in their way?

As it turns out, the commander-in-chief’s alma mater has been through a lot of this before. GET-UP actually first formed in 2000, hoping to gain union recognition from President Bill Clinton’s reformed, pro-union NLRB. A 2003 election fell heavily in favor of unionizing, but Penn’s trustees and administration, fearful of financial losses and increased regulations, refused to recognize the results.

The university was able to continue stalling until the resolution of a case at Brown University in 2004, when the anti-union NLRB members who’d been appointed by President George W. Bush in 2001 succeeded in overturning the Clinton NLRB’s pro-union ruling. Soon after, GET-UP’s election was ruled void by the NLRB; GET-UP then disbanded and the new ruling remained in place until 2016.

Now, as in 2000, America has a new Republican president and vacant spots on the NLRB board. On April 26th, Trump named Philip A. Miscimarra as the new NLRB chairman. Miscimarra, a former Penn graduate student himself (twice over), was the sole dissenter in 2016’s critical ruling. On May 23rd, Trump submitted the names of anti-union attorneys Marvin Kaplan and William Emanuel for FBI background checks, announcing that he plans to nominate them for the remaining two vacant NLRB slots. Once the NLRB has a full board, schools could petition them to reverse the order once again.

According to Danielle Hanley, a political science PhD student and one of GET-UP’s leaders, nobody is entirely sure how long Trump’s nominations or GET-UP’s election process will take. “We requested a summer election,” said Hanley, “because our best guess is that we can expect Trump’s appointments to happen in the fall.” Based on the timeline of the group at the University of Chicago, who are currently in Day 10 of their hearing after filing for election on May 8th, Hanley estimates that GET-UP could get enough mail-in ballots sent in to win an election “sometime in mid- to late July.”

Hanley is fearful of what she says are attempts being made by Penn’s administration to alter GET-UP’s timeline. On May 31st, an official statement released by provost Vincent Price and vice provost for education Beth A. Winkelstein accused the students behind the election proposal of forming a “gerrymandering unit,” by asking for the election to be determined by mail-in ballots. In order to guarantee the “open and fair election” that the Office of the Provost supports, explains the letter, Penn is asking the NRLB “to schedule the election for the fall, when a full population of graduate and professional students will be on campus to participate.”

In response to the provost’s letter, which they believe is an attempt to postpone an election until Trump can appoint new members to the NRLB, GET-UP has posted a video online explaining how fellow students can update their summer addresses to ensure that they’d receive a mail-in ballot.

Even if an election is timed as planned, Penn’s union could face many more roadblocks put in place by the university. Students at Yale University won an election in late February, but have yet to begin negotiations on a contract. Although the administration is legally required to recognize Yale’s graduate union, the university has since made numerous appeals targeting different aspects of the election, most of which remain unresolved.

Hanley is disappointed at the frequency with which these cases result in what feels like war between university administrations and their students. “We’re trying to build something here,” she said. “We’re in this because our work makes Penn work. Every graduate student at this school is here because we love our work. And when we’re more productive, it makes the university more productive.”