The tourism mogul tells us what it’s like to orchestrate Wawa Welcome America, one of the country’s biggest free events for Philly’s biggest holiday. He also gives us a sneak peek into what’s new for this Fourth of July. 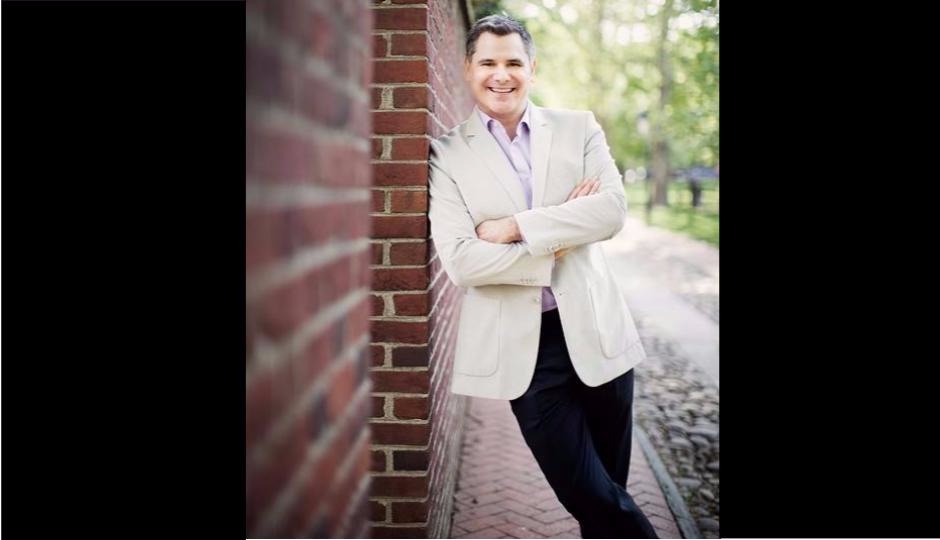 We’re two months out from one of Philadelphia’s biggest celebrations — the Wawa Welcome America festival — and Jeff Guaracino is the man leading the effort to organize all 50 free events that will take place over six days all across the city. When Mayor Kenney appointed Guaracino in 2015 to spearhead Welcome America, Guaracino had already spent years in the Atlantic City tourism industry as the executive director of the Atlantic City Alliance and had been at Visit Philadelphia for over a decade behind signature campaigns like “Get Your History Straight and Your Nightlife Gay.” From humble beginnings, the Philly native tells us what it’s like to manage one of the country’s biggest free events, how he stays calm, and what we can expect for July 4th this year. Guaracino also takes us down memory lane to a tough career moment and an unforgettable Philly concert experience.

I grew up in … South Philly. 10th and Christian. But my mom moved us to Pennsauken, NJ early on. I went to school out there at Rowan University and moved back to Philly 14 years ago.

My family thinks I … have the coolest job. They say my mother would be so proud. She passed about 15 years ago unexpectedly. So they say that she, especially as a single mother who made so many sacrifices, would be delighted at the work I get to do every day for Philadelphia.

I live in Society Hill because … I love history. It’s such a privilege to walk down the same cobblestone streets as Alexander Hamilton. I love the vibe of Old City and its walkability. It’s one of the things that makes Philadelphia unique.

People always email me to ask … can you hire me? Because everything we put on is free — it’s a festival with 50 free events — we hire a lot. We hire production companies and event producers and entertainers. And the people who reach out are people like me who love Philadelphia and want to be a part of it. And while things are free, it isn’t cheap. It takes a lot of hands.

A Philly network I’d like to tap into but haven’t yet is … the tech and innovation community. Last year was the first year we partnered with Comcast NBCUniversal, and we loved that. So we’d like to do more with tech and innovation companies. It was the spirit of Ben Franklin to always innovate. So we’re thinking of how we can keep innovating the 4th of July. And I’m not just talking what’s trendy. We really want to think more about data and measurement, like ways to measure social interaction and what people are doing. Innovation and technology is a theme we want to continue to bring into Wawa Welcome America.

At Wawa I order … the hoagie. Specifically a Shorti with turkey and cheese.

One skill I’m still honing is … zen. In a world where there’s so much going on and with a festival like Wawa Welcome America where there’s so many details from fundraising to safety, zen is something I’m working on.

The last concert I went to was … last July 4th on the Parkway when we celebrated Gamble and Huff with Leon Bridges.

My most memorable concert experience is … 1990 — Madonna’s Blond Ambition world tour. It was a game changer. It first appeared in Philly at JFK stadium as part of what was Live Aid. The tour changed what people expected out of a concert, opened people’s minds and inspired me because it was a concert with a message. We were sort of at the height of the 80s HIV and AIDS epidemic and she used her platforms to talk to people about this. And more than a decade later I worked on an Elton John concert in 2005 that was also a concert with a message on HIV and AIDS that was very impactful and empowering for people.
The most ridiculous part of my job is … that I can’t control the weather.

A Philly restaurant I can’t stop going to is… Cuba Libre. It’s really great and the owners are really great people who care so much about Philly. They started in festivals like Welcome America 25 years ago. 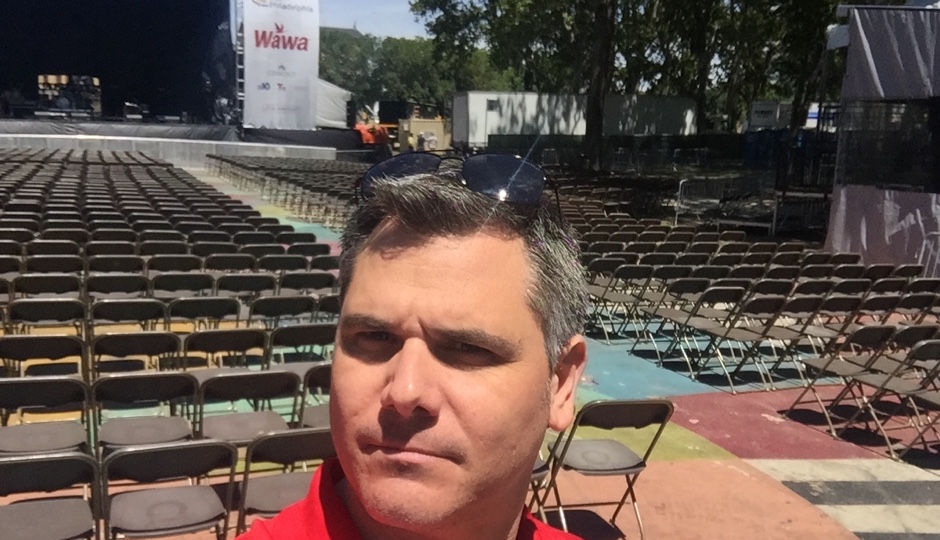 The best part of my job is … the importance of July 4th and what Independence Day means to the nation and to the identity of every Philadelphian. July 4th is ingrained as a birthright to every Philadelphian who is here. Back from 1776 we decided to make the world a better place beginning with the American Revolution. This is what Philadelphia uniquely gave to the world. So it’s a privilege to curate a vision of what Philadelphia wants to say to the world today about our role not only in American history but also about our role in contributing and innovating to this day. And it’s not our vision of what July 4th is, it’s the city’s vision through 50 events over six days.

This year we will … be doing fireworks on multiple nights. And we have a big announcement on that coming up. We’ll also be bring July4th events to every single neighborhood. The Philly Pops concert will be back for its 18th year in front of Independence Hall on July 3rd. We also do what I think is the most significant event in the country in front of Independence Hall called the Celebration of Freedom ceremony. That’s where the mayor gives an award to a citizen that’s done extraordinary service to our country and to our city. We’re also excited about honoring Boyz II Men and the free concert with Mary J. Blige. The men of Boyz II Men are an extraordinary example of the idea that dreams can come true. They’re from all different neighborhoods in Philly and became global superstars selling 60 million albums. This is a concert with a message. Mary J. Blige and her new album “The Strength of a Woman” is about women empowerment and about overcoming any major issue that you might have in your life.

And on May 23rd we will have an exciting announcement about an event that only happens once in a century.

The Gayborhood is … a very special place in the world because it’s where everyone comes together, gay or straight. It not a place where just people of the LGBTQ community go. Philly has been glad to put out 70’s rainbow street signs, a sign that everyone is welcome. And it’s also a transformation like Philly has been transformational. What it was in the 90’s before Tony Goldman and other business owners came has been transformed.

On Gayborhood racism … I don’t know enough about it to really comment.

Writing a book is like … a marathon, and it’s mind-opening. For my last book I talked to 75 experts about LGBT tourism and hospitality in their countries.

The best section in my latest book The Handbook for LGBT Tourism and Hospitality is … the section on Philly and how Philly became a groundbreaking LGBT campaign modeled all over the world.

We need an official holiday for … the day after Thanksgiving.

A party at my house involves … people from all walks of life. Like the the last party I had, which was a book party. It was hosted by Hoffman Design and was very diverse with not any one type of person. My friendships reflect the opportunity I have to work with so many different communities.

A tough time in my career was when … Super Storm Sandy slammed into the Jersey coast and Atlantic City became the epicenter for media who were reporting that the city had been washed away. I wish we could’ve done more to change that at that very moment. I wish I could’ve had 50 PR people down there to do interviews and control the narrative. We had to spend almost a year changing people’s perceptions with a campaign because people had stopped traveling to the Jersey Shore.

Atlantic City’s promise is … evident in the beach concerts that I was a part of betwen Live Nation and the Atlantic City Alliance. When you see Pink on the beach mid-week, that’s the kind of visitor AC needs. It needs visitors who are there beyond just gaming. And it doesn’t have to be a family destination. It should be a great adult destination. There are already many Jersey Shore beach towns that do a great job for young families. AC is a great adult getaway.

I am good in … high-pressure situations. I realize that there are many things I can’t do so in intense situations I know I have to be logical and evaluate what’s real and what’s not. I have to understand the other point of view. Once you take the emotion out of it and begin to identify what’s noise and what’s the real issue, then ultimately everyone can win. I don’t believe there are winners and losers.

Welcome America is making changes to … reflect all great things about Philly. We want to invite everyone to be part of this celebration, to be inclusive. And we’re making changes to innovate. That’s why you’re seeing Comcast and Live Nation and Wawa in this. IT’s a festival for everyone and should reflect diversity and inclusiveness.