The man behind the iconic cheesesteak shop tells all. 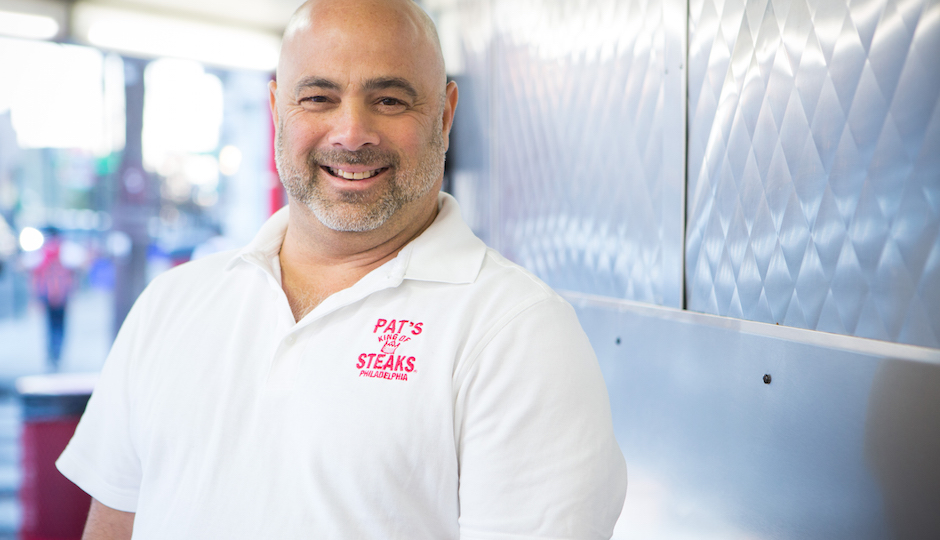 In 1930, Pat Olivieri and his brother invented the cheesesteak. Nearly 90 years later, Pat’s great-nephew Frank Olivieri runs the iconic South Philly shop, selling a ton of sandwiches 24 hours a day, seven days a week, 363 days a year. (Hey, do you really want a cheesesteak on Thanksgiving or Christmas?) Here, he tells us all about it.

I grew up … deep in the south of South Philly. Packer Park.

I started working at Pat’s … when I was eleven years old. I was too short to work inside, so they had me walking around wiping the counters. This was before we had the picnic tables. It was just the counters. Then I became a soda jerk, then a French fry jerk, then making the sandwiches, then the cash register, and, finally, the owner. I’ve owned it since the late 90s with my father. He’s Frank P. for Pat and I’m Frank E. for Enrico, but everybody calls me Frank Jr.

The hardest thing about running a place like Pat’s is … keeping your sanity thanks to the cast of characters both working there and who visit the store each day.

My most recent extravagant purchase was … a Rocket commercial home espresso machine and grinder. It was more than a dollar and less than $10,000.

The soda tax is … more ridiculous than Donald Trump being elected president.

If I’m going to have a cheesesteak somewhere else in Philly, it would be … nowhere. Sometimes I get them in Jersey. I had one at Sack O’ Subs in Ventnor recently. It was delicious. I’ve had friends drag me to Steve’s and Geno’s and Tony Luke’s, but I don’t really go there.

One thing I really suck at is … sticking to a diet. Oh, and golf. My golf instructor, after a year of lessons, he tells me to take up swimming.

My relationship status is … separated. I’m in the process of getting divorced. But I am also taken.

I like to collect … pinball machines. I have seven in my office including Dr. Who, Metallica, and Kiss. I’ve gotten engrossed in pinball. This guy around the corner from me has 52. But, well, my wife is trying to get the machines in the divorce. She says she’s entitled. We’ll see.

In my experience, restaurant publicists are … overpaid and under-experienced.

Ten years from now, Pat’s will be … exactly the same as it is now. We’re going to keep it the same. It’s in perfect balance just as it is. There is no reason to topple that balance.

People would be surprised to know that I am … naturally a chef. I can cook anything. Italian, French, vegan, whatever. I cook it all. I’m at Audrey Claire’s Cook once a month. Just for fun.

The next Philly team to win a championship will be … the Philadelphia Flyers. Hopefully in my lifetime.

For my next vacation, I’m going to … go back to the BVI and rent a catamaran and sail. I just did it four weeks ago with my girlfriend Nancy. We’ll be going back. I’m certified for bareboat charter and catamaran and all that. It was a blast.

One condiment I would never put on a cheesesteak is … tabouli.

The first concert I ever went to was … with my sister, my parents took us to JFK Stadium to see a quadruple bill. It was Sly and the Family Stone, Rare Earth, and I can’t remember who else. Maybe 1970. It was huge. But the last concert I went to was Adele. She’s awesome, a blessing. She truly is. Next up is Roger Waters in August. Third row center.

If you really want to piss me off … put my ketchup on your Geno’s steak. Oh. My. God. People do it all the time. They walk over and use my condiments.

One TV show I cannot miss is … Ray Donovan. I binge watched it. But now Nancy has me watching This Is Us. That’s great, too.

The most famous person I have ever met is … several United States presidents. Bill Clinton. Obama. Al Gore, because we know who really won that election, so he counts. And Donald Trump, pre-presidency.

I buy most of my clothes at … BJ’s and Nordstrom.

My accountant is always telling me … “Did you receive my email?” She sends me emails constantly. Get this: She’ll send me an email, she’ll push send and then literally call me immediately and ask, “Did you get my email?” This is at 6 a.m.

Those garish Pat’s Steaks ads on the buses … are the best investment that I ever made. We did subway takeovers for the Pope. And everywhere you go in the city, you run into the buses. There are always 18 to 20 running around the city. The other week, did you see that story about the guy who grabbed and kissed the Septa police officer? I’m looking at the news, and there’s my bus right in the shot! It’s so cool. But it is expensive as hell.

If we’re going out to dinner, let’s go to … The Saloon or Mustard Greens or let’s get a pizza at Stella or let’s go to Vetri, any of Michael Schulson’s restaurants, Parc, Bibou. I was at the Saloon the other night. Got a gigantic filet au poivre, the seafood sampler with the clams Pavarotti and clams casino, and stuffed poblano peppers with veal and cheese. And a great Old Fashioned. Several of them.

Yelp is … just as valuable and unreliable as Carfax.

My big plan for this year is to … grow my Spread the Whiz foundation, a non-profit that I started in January. We’re going into the schools to help educate kids on better nutrition, and we’re doing cooking demonstrations.

One thing I miss about “old” Philadelphia is … going to Gimbels at Christmastime.

The farthest I have been from Philly is … France or Italy, whichever is further away. But I’ll tell you. When I was married and living in Marlton, New Jersey, it was like I was living in Siberia.

The last time I raised the price of a sandwich was … three or four years ago. It’s $10 for a cheesesteak, tax included.

Running a family business is … about as much fun as an angry bag of squirrels.