10 Winter-Friendly Running Trails in and Around Philadelphia

Neither cold temperatures nor a little snow will stop Philly runners. 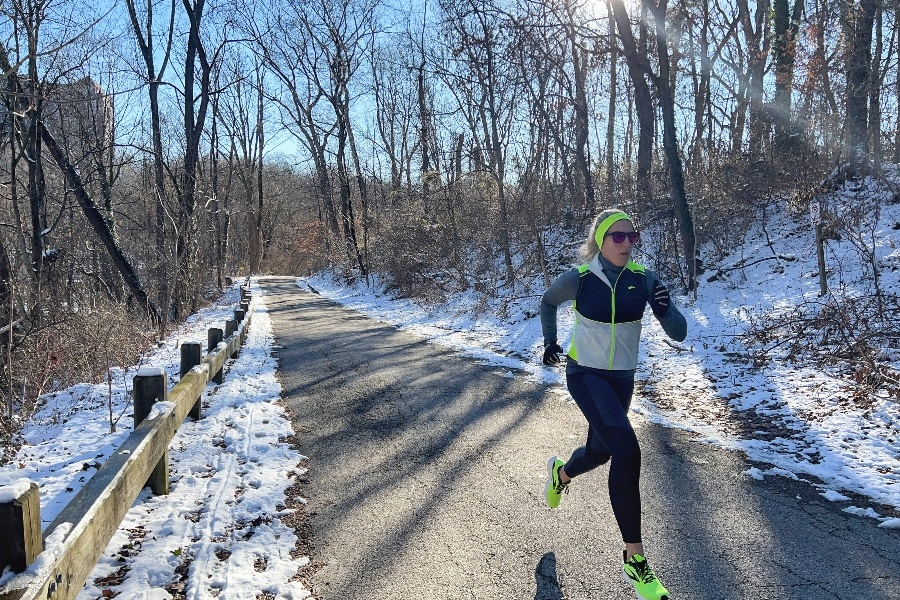 Just because it’s cold doesn’t mean you can’t get your mileage in. Read on for our guide to the best winter running trails in Philadelphia. / Photograph courtesy of local runner, Stacey Gross.

We know there are some hardcore runners out there who don’t let a little bit of snow — or frigid temperatures — get in the way of their endorphin highs. That’s why we chatted with the pros for the lowdown on running in Philly when the mercury drops. Remember, safety and warmth first when you’re running in the winter, friends! Make sure to be properly dressed when you head out — think cold-weather leggings, some type of head gear, gloves, an insulated jacket. Below, find where to go when there’s a bit of snow.

For a Snow-Filled Jaunt in the Wiss

“My favorite time to run in the Wissahickon is when it has snowed. My favorite run starts off from the Jannette Street trailhead and turns left at the Yellow Trail. The Yellow Trail will take you through the woods and across smaller creeks and waterspouts. Continue until you get to the entrance for Houston Meadow. Now you’re in one of the prettiest parts of the park — be sure to take a selfie. Keep going until you get to the hill that we call ‘Mother.’ You’ll end up on Forbidden Drive, continue across the street (Bells Mill Road) and take the first trail on your left. This trail will take you to Andorra Meadow, which some would argue is the most beautiful and environmentally important feature of the park. It’s also amazing in the snow! Finally, after you loop back to Forbidden Drive, you can enjoy the creek views on your return to Jannette Street. The entire distance is close to a half-marathon, but you can chop it where you want.”

“I love seeing the Wiss covered in snow from up high! The Orange Trail from Valley Green Inn is my jam. I take that up to the Toleration Statue and get an awesome view of the valley with the trees and river covered in snow.”

“The loop begins at the trailhead at the bottom of Chestnut Hill Avenue in Chestnut Hill. You will descend into the gorge and cross over several bridges (including the local favorite, ‘The Red Covered Bridge‘), climb the Rex Avenue steps and meet up with the ‘Kneeling Lenape‘ statue, known also as ‘Teddy’ (Tedyuscung). After returning through the trees to the start, we like to end our run with an expression of gratitude by placing a stone on the pile, a nice way to wrap up the run with positive focus. Though it is a mere three miles, it offers a challenging punch with some technical trail terrain and steep switchbacks. You’ll pack a solid workout into a very manageable timeframe. Plus, the beautiful setting will hold your attention, taking your mind off the effort!”

For a Fairmount Park Run

“When it snows, the trees are all a stunningly bright white! I’ll run and dodge snowflakes on the path until I reach Sweet Briar Drive and take a right, then another right onto Lansdowne Drive. I climb that hill until I’m running under the Smith Memorial Arch and along the Avenue of the Republic until I reach the Please Touch Museum. These lush lawns and open green spaces covered in snow are a beautiful sight to see. After a few photos and a cartwheel or two in the snow, I head back down Black Road until it meets the West River Drive path again and run my way back home. This is about a seven-mile route and is just enough time out on the trails to get lost in the beauty of the winter weather before your fingers and toes are begging you to head indoors for a nice warm cup of joe!”

For Some Time Spent Near Water

Where: The Manayunk Canal Towpath
Recommended by: Amandah Povilitus, trainer at Fitler Club and X-Force Philadelphia

“This is truly an amazing spot: beautiful and super easy to get to. If I’m doing a long run, I’ll just run from the Schuylkill River into Manayunk and connect onto the trail. If it’s a shorter run, I’ll just drive to Manayunk, park right on Main Street (there’s parking right by the entrance), and jump onto the trail. I love it because you run by a river, around cute bends and under bridges. You see a lot of art and graffiti, and you can even climb out onto the dam (although probably not if it’s snowing and slippery!). Running on the trails can shield you from the bulk of any bad weather and create a really picturesque experience.”

For a Break From the City

“Located one hour northwest of the city, French Creek is easy to get to and peaceful in the winter, with a nice big lake. This is definitely a hilly park, so I would avoid it if there’s significant snow.”

Where: Choose your adventure
Recommended by: Pat McCloskey, race director of runBUCKS

“Bucks County has a variety of terrain for anyone seeking off-road running no matter ability. For the beginner seeking flat but forgiving surface and who doesn’t want to get lost, the Delaware Canal State Park towpath is almost 60 miles long and runs straight from Bristol to Easton, with many access points. (The Yardley Park and Ride is a great place to start.) Just keep the canal on your left or on your right until you turn around. For easy to follow but hilly trails, opt for the horse trails of Tyler State Park. Bucks County Beer Runners frequents the trails in Core Creek County Park — there are access areas across from Maple Point Middle School and from inside the park. Some sections are challenging but fun. Also, Bucks County Roadrunners host a Saturday trail run on the New Jersey side of Washington Crossing Park. The group meets in the lot of Nelson House in Titusville, with runs lasting about an hour (six-to-eight miles).” (Ed. Note: Bucks County Roadrunners also host a Sunday-morning winter series where you’ll run various distances through Tyler State Park.)

This page has been updated since originally publishing.