Biking Was Big in Philly Even Before the Pandemic. Then the Past Year Sent it Skyrocketing

Philly’s cycling scene has been growing for years. Now, record numbers of newbies are turning to biking for exercise, travel, and access to the great outdoors. 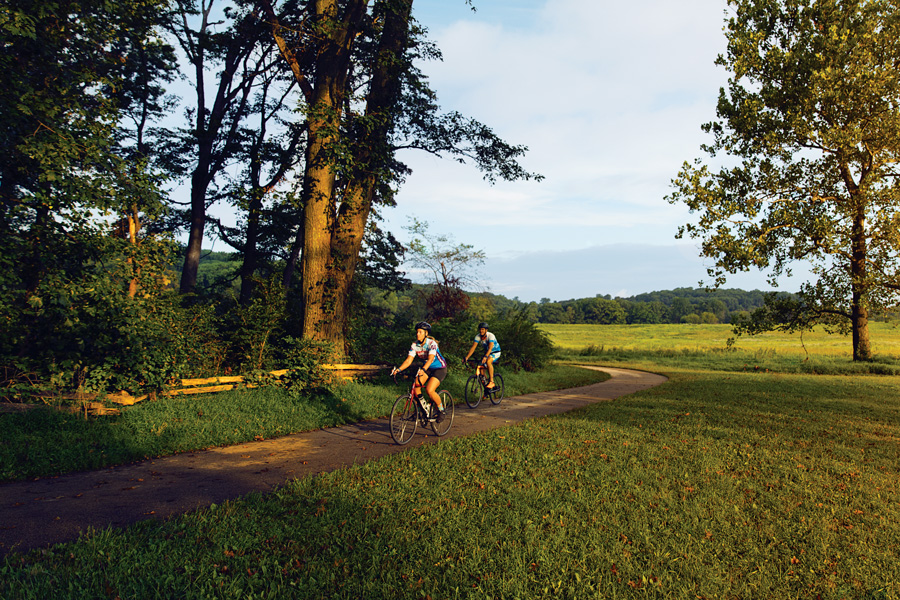 Riders enjoy the wide-open spaces of the trails of Valley Forge. Photograph by Colin Lenton

Local bikers are noticing a swell of traffic on their usual routes. Actually, more like a tsunami. In the first two and a half weeks of March 2020, Kelly Drive saw a 471 percent increase year over year: The trail counted 3,288 riders during March of 2019, while for the same time period in 2020, that trail saw 18,759 visitors. March 2020 also saw increases of between 75 and 181 percent in biking on other major trails, like the Schuylkill Banks and the Port Richmond Trail, according to data from the Delaware Valley Regional Planning Commission.

Paths that were typically easy to navigate suddenly required more care thanks to the steady stream of riders whizzing by. Even at the quietest times of day, cyclists had to stay hypervigilant to ensure that everyone had a safe and socially distant ride. The increased traffic was representative of Philly’s diverse landscape: Riders of all races, backgrounds, ages and abilities have been picking up cycling.

The growing popularity of biking in Philly is a direct result of how 2020 turned our daily routines upside down. COVID-19 posed myriad challenges that caused citizens to rethink the ways in which they move. In a city reliant on public transportation, modified public transit schedules (and fear of getting sick) caused commuters to get creative with their mobility. And with fitness centers closing or reducing their capacities, biking proved to be a safe and effective way to get exercise.

It’s not just Philly, either. Across the country, April 2020 sales for bikes, parts, helmets, and other accessories went up a combined 75 percent to $1 billion, and leisure bike sales grew 203 percent compared to April 2019, according to the market research firm NPD Group.

The 2020 biking boom wasn’t all rosy for local bike shops, though. Lee Rogers, owner of Bicycle Therapy on South Street, says that with the surge, he was sold out of inventory by June. “Companies have been supplying dealers in a trickle here and there, but nothing substantial, so most places have been sold out,” says Rogers. He predicts the bike shortage may last into 2021.

Shelly S. Walker, owner of Fairmount Bicycles and Brewerytown Bicycles, says she’s seen higher demand for repairs but worries about what the national bike shortage will do for sales in the long run. “With the world running out of bikes,” she says, “consistently selling a high volume of bikes wasn’t sustainable, so our year-to-date sales are actually lower than last year” as of October 2020.

Bicycle Therapy’s sales model has changed since COVID, and business in bike accessories and repairs — if not bikes — has jumped. “Sales of locks, helmets and pumps, which we’ve been doing curbside, have been a huge success,” says Rogers. “People would call us from outside, ask for a couple options, and pay via Venmo or credit card.”

Henry Sam, owner of Kayuh Bicycles and Café — the shop’s named after the Malay word for “pedal” — has noticed a similar trend. His accessories and parts sales have increased by almost 40 percent since the beginning of the pandemic. His Girard Avenue business has been open for eight years, but this biking frenzy has been unprecedented. “It’s usually quiet this time of year, but we’re still backed up with repairs,” says Sam. As the months progress, he hopes to be able to restock and sell new bikes to meet the high demand. 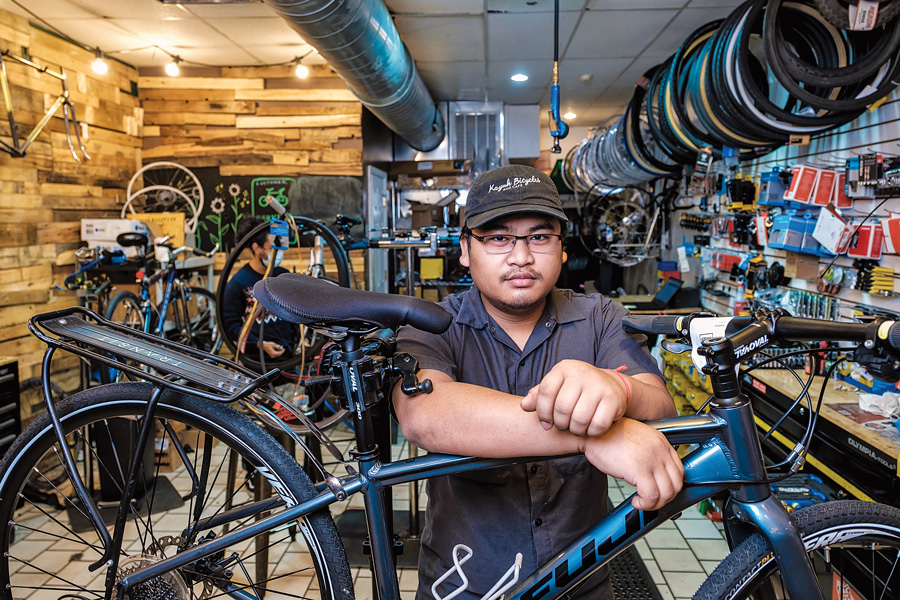 Henry Sam, owner of Kayuh Bicycles and Café says the boom in the Philadelphia biking scene has led to a huge increase in demand for repairs and parts. Photograph by Jeff Fusco

Despite the temporary unavailability of enough new bikes in 2020 (Craigslist, anybody?), the timing of this massive increase in riding was apt, considering the strides that Philadelphia and the ’burbs have made with the growth of the Circuit Trails, an ever-expanding regional network of bike paths overseen by a coalition of advocacy organizations. In 2019, small new additions created 70 miles of connected trails, extending the circuit from Montgomery County to Camden County in New Jersey, including spots like Fort Washington Office Park and Pier 70 and Penn Treaty Park in Philly.

“Even before the pandemic, cycling was increasing in this region due to improvements in trail and road infrastructure,” explains Edward Chang, the board chair of the Bicycle Coalition of Greater Philadelphia, which is a founding member of the Circuit Trails coalition. “COVID-19 has shown just how important alternative forms of transportation like bicycling and the continued development of our public spaces truly are.” Chang wants to see more trails, safer routes, and better education on how Philly’s citizens can use the spaces we have. His favorite routes, he says, are outside the city, in Chester County: “Access to nature and the outdoors is a critical component of our well-being. And we’re blessed with miles of low-traffic roads and rolling terrain that reminds me of the European countryside.”

“COVID-19 has shown just how important alternative forms of transportation like bicycling and the continued development of our public spaces truly are.”

All of these improvements mean we could start to see a city where biking — not car travel or even public transit — is the preferred mode of transportation. After all, there’s been a longtime fight to keep improving and expanding our accessible outdoor spaces. The aforementioned Bicycle Coalition of Greater Philadelphia, a collaboration of local nonprofit organizations, foundations and agencies, is advocating to increase this connected network of trails to more than 500 miles by 2025. (Greater Philadelphia was already home to 341 miles of multi-use trails as of October 2019.)

Rogers, whose shop is in its 30th year, thinks it’s no surprise that Philly’s biking scene was booming even before coronavirus changed the way we live — and that cycling fervor is here to stay. “A lot of people are going to get into cycling and stay into cycling,” he says, “because they’ll have learned that it’s easier to get around town, it costs less money than any other way, and it’s great exercise.” It’s also a self-paced activity that citizens young and old can take advantage of. That’s one reason the Bicycle Coalition started its Youth Cycling (BCYC) program for young people ages 12 to 18. The group works to teach kids bike safety and empowers them to tackle sports like cycle racing and triathlons. 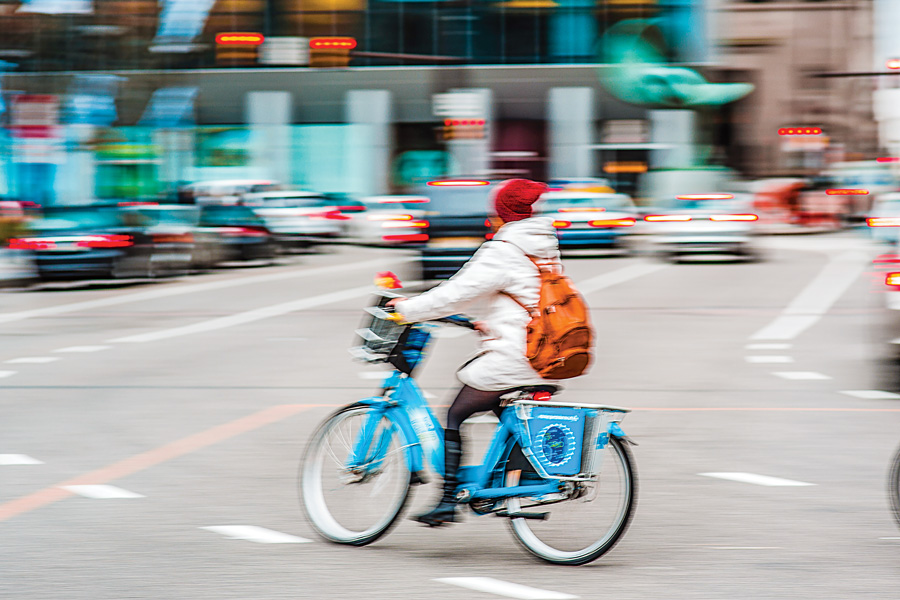 A commuter rides an Indego bike in Center City. Photograph by Jeff Fusco

Meanwhile, Philly must continue to work to become a safer city to bike in — particularly with more newbies on the road. According to the Philadelphia Bicycle Coalition, motor vehicles caused 16 bicycle fatalities from 2016 to 2020, while 205 pedestrians were killed. In March of 2020, just before the city shut down, the Vision Zero Philadelphia Conference brought more than 200 stakeholders from the public and private sectors together at Temple to strategize safer walking and riding paths.

The mission of Vision Zero, a policy platform focused on eliminating traffic deaths, is to make Philadelphia more accommodating to bikers by encouraging the city to adopt proposed strategies, Chang says, including construction of more protected bike lanes, creation of safer crossings and sidewalks for pedestrians, and the institution of automated speed enforcement, “which helps make streets safer for everyone.” Vision Zero also prioritizes the passage of bills that would allow PennDOT to build parking-protected bike lanes, a fight being led in Harrisburg by the group Families for Safe Streets Greater Philadelphia.

Ideally, Philly and the surrounding region will become more bike-friendly for both new and seasoned riders and capitalize on the rising biking tide. History certainly implies the trend is here to stay: For years, Philadelphia has had a higher per capita percentage of residents commuting by bike than major cities including Chicago and New York. With the Circuit Trail planting roots around the region and the continuous strides by the city to improve safety, there’s plenty of reason to bet that once our bike shops are stocked again, Philadelphia’s cycling scene will continue to flourish.

Published as “Pedal Power” in the Be Well Philly 2021 health and wellness guide.