CorePower Laid Off These Philly Yoga Teachers, So They Formed a Studio of Their Own

Forged in the midst of a pandemic, this yoga studio is creating a community that spans mats across the city and shore. 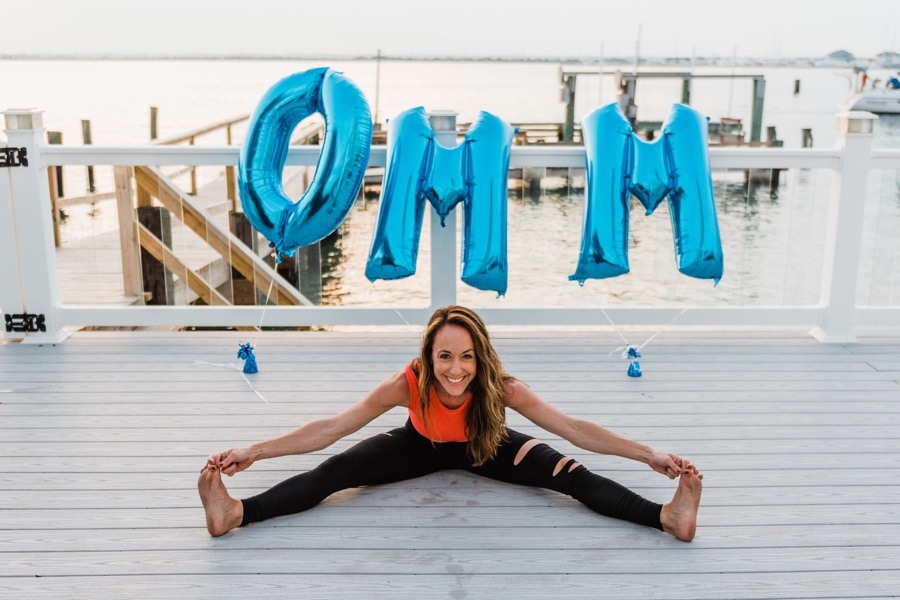 What happens when three of Philadelphia’s most active yogis are left without a place to practice poses, meditation, and breath control alongside their students? They open a roving, virtual yoga studio, of course.

OMM Yoga Studio, founded by Anne Ledyard, Jacki Silva Steuer, and Melissa Green Henkin, was forged amid the coronavirus pandemic as studios across the city began shuttering in March, disjointing the city’s fitness community. While some studios were able to quickly pivot to virtual classes, corporate ones like CorePower laid off the majority of their workforce, including Ledyard, Steuer, and Green Henkin, who all taught at the Center City location.

“It’s an unfortunate thing. It’s tough for anybody,” Green Henkin says, “So many people in this world are going through this right now, regardless of the industry that they’re in.”

The disconnect was palpable, so the trio set out to begin rebuilding the sense of community they were missing. The trio decided to join with other instructors to host yoga classes via Zoom, as well as outdoor classes in Fitler Square and down the shore in Ventnor City, New Jersey. They officially launched on July 25th.

“We found that we had students reaching out to us asking where and how we were teaching and saying that they missed the yoga community that we once had. That pushed us into opening OMM because we wanted to create a central space where everyone could come experience really high-caliber, strong and supportive teachers and where we could still feel this sense of community that we all wanted to have,” explains Green Henkin, “We wanted to still feel those connections, even while we all weren’t physically connected.”

OMM, which stands for Organic Mindful Movement, is a yoga studio that aims to replicate the boutique fitness experience virtually. Classes run anywhere from 45 minutes to one hour and are meant to slot into a work-from-home schedule seamlessly. There are mid-day virtual Vinyasa classes fit for a lunch break and evening Slow Flow sessions, which combine gentle, steady movements with static postures to help you unwind at the end of the day. All first classes are free, with single drop-in classes priced at $12 per class and five and ten class packages for virtual and outdoor offerings. 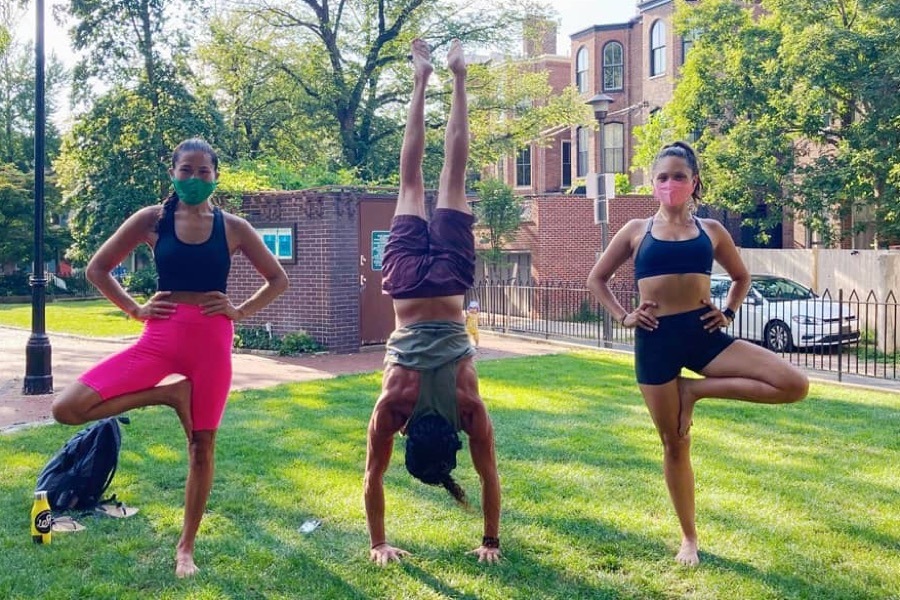 OMM hosts outdoor classes in Philadelphia and at the Jersey Shore. | Photograph courtesy of OMM. 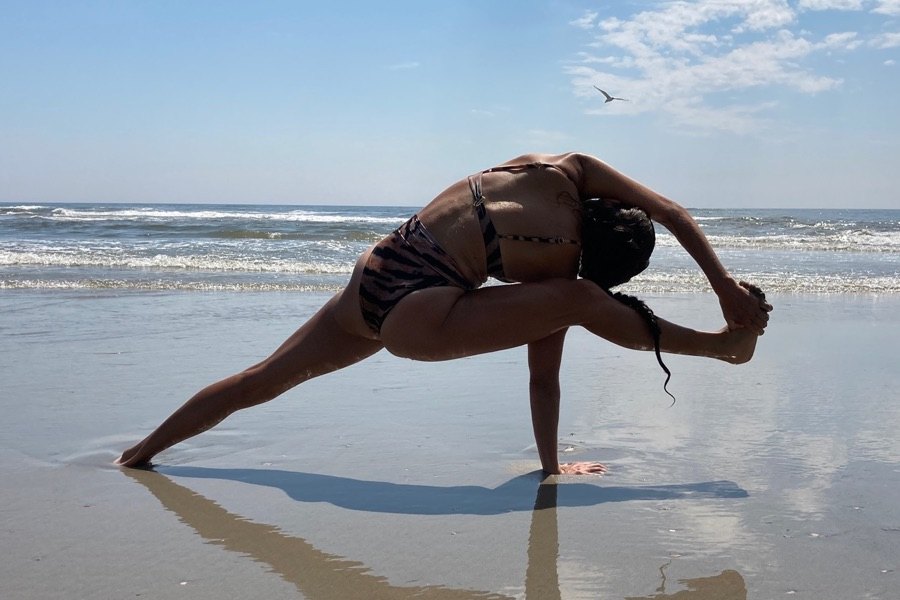 Anne Ledyard demonstrates a yoga pose on the sand. | Photograph courtesy of OMM. 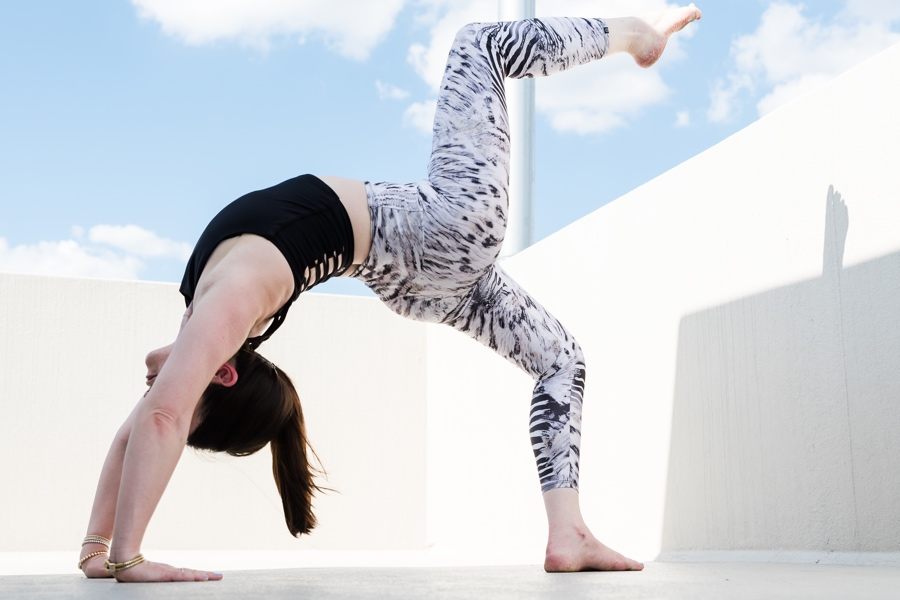 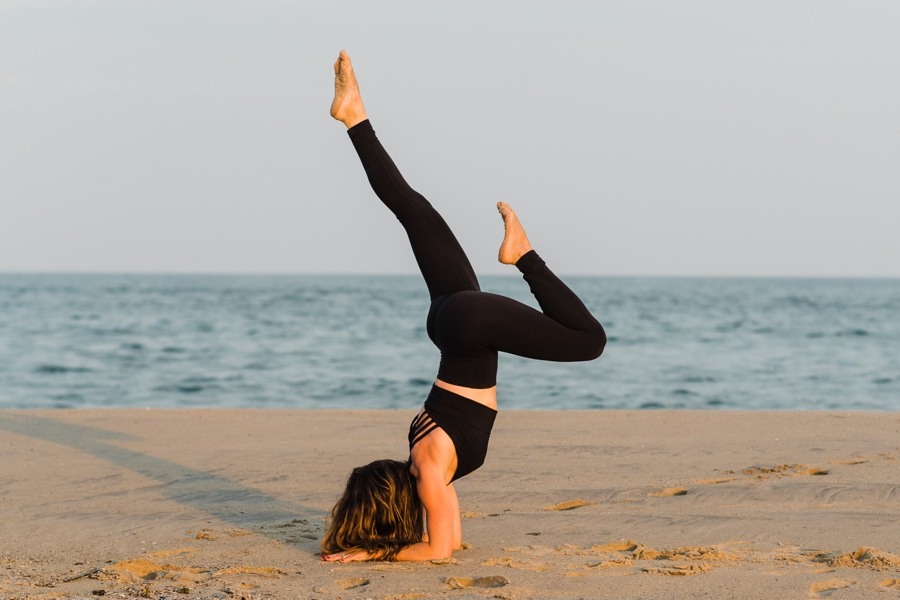 Jacki Silva Steuer demonstrates a yoga pose on the sand. She teaches outdoor yoga by the beach through OMM. | Photograph by Taylor Nicolle

“What’s neat is we have teachers in Philly, in Boston, in California,” says Silva Steuer, “We have instructors down the shore. It gives us the opportunity to all join forces with Philly as our home base.”

Green Henkin says yoga practice is meant for times for like these, where stress and uncertainty are the dominant national mood. Known for decreasing cortisol, A.K.A. the stress hormone, yoga can help calm anxiety and ease depression. Plus, yoga is low maintenance: “Without needing props besides a yoga mat, you can really unroll your mat wherever and get the benefits,” she says.

Still, OMM is more than a yoga studio. Classes like HIIT Sculpt combine strength training with cardio for a sweaty workout, while Barre-Yasa melds yoga with barre to lengthen muscles and build flexibility at the same time. Everything is steeped in deliberate movements and breath control to make classes relaxing yet challenging.

For Green Henkin, however, the most exciting part of OMM are the instructors. Each had worked with Green Henkin, Ledyard, or Silva Steuer in the past, leading to a lineup featuring some of Philly’s most passionate instructors, like Regina “Gi” Shetler, who held down CorePower’s Yoga Sculpt classes and Peter Reyes, a certified Wim Hoff Method instructor.

And while OMM will continue to hold its outdoor classes in Fitler Square and Ventnor until the weather forces everyone to do downward dogs in down jackets, Green Henkin says that they are not sure what the future holds yet.

“We’re rolling with the world around us,” she says, “Our goal is just to support our teachers and students by providing them with a space. As things change, we hope to evolve with the world.”

Though a brick-and-mortar location is a possibility, Green Henkin acknowledges that with all the concerns still surrounding indoor activity, virtual fitness might be here to stay. The three founders are determined to be collectively prepared for any and all possibilities.

“We’re focused on supporting instructors, students, and neighboring studios as we redefine, reconnect and rebuild,” Ledyard says, “One of the benefits to being a new studio in a new normal is that we are inherently open to navigating change.”