He mapped it out turn-by-turn so other runners and bikers can attempt all or part of it for themselves.

We know how hard it can be for athletes dealing with cancelled races — but some of Philly’s running crew are dealing with it a bit more creatively than others. Take Michael “Gagz” Gagliardi, for instance. He’s a 44-year-old runner who lives in Somerton, with his two sons, Leonardo (13) and Dante (11), and his wife, Shannan, who’s a dedicated runner with Northeast Philadelphia running group TBR Philly. (Gagz also runs with the run club.)

On Saturday April 25th, Gagz finished an incredible 76-mile run of Philadelphia’s perimeter. And, he created turn-by-turn directions for anyone in the city who wants to try to challenge themselves (It’s also walkable, over a period of days. A local group of artists has been doing it for years.) As for the ultra run, he’s named it the “Philly Four Corners” run, and BillyPenn.com first reported it out this weekend.

Be Well Philly caught up with Gagz today to find out what inspired him to create this new Philly benchmark — and what keeps him running.

Be Well Philly: How did you start running ultra marathons?
Michael “Gagz” Gagliardi: I started with the ultras in December 2014. I’m sure you know Rebecca Barber. She’s awesome, and it was her run in particular — the December 2014 Rocky 50K — that literally changed my life. I was running that run, and I met a woman there, Mary Arnold. She’s pretty involved with the running community, and she started telling me about 100 mile races. I was saying to myself, “Wow.” Because I’m the kind of guy that I get into something and I just go. I go and I don’t stop. Before that I had run a couple marathons and an Iron Man and I was looking for something. When I did my first 50K, I said, “This is it. I’ve found my people.” It was one of those life-changing moments — and, I realized it was one of those moments while it was happening. I savored it.

The Rocky 50K is awesome. And you kept running ultras after that?
Mary Arnold became my ultra mentor. After the Rocky 50K and my first 50K, I completed seven 100-mile races, including the famous Leadville 100 in Leadville, Colorado. I also did the Tahoe 200 in September, a 200-mile race where you circumnavigate Lake Tahoe. This was crazy. It was 41,000 feet of mountain climbing over the course of 100 hours. It started to snow and suddenly we were in six inches of snow. I had snow all over my beard, my hat. My wife paced me for the last 10 miles, and I finished in 76 hours. I got 27th place. I was one of the fastest guys from the East Coast. Ultrarunning magazine took a picture of me with snow in my beard and printed it.

What do you love so much about ultra running?
I have somewhat of an addictive personality, and there was a time in my life where I wasn’t living my best life. When I started to make changes in my life, I started changing small things. I ordered turkey burgers. I started to lose weight, live a healthier lifestyle, be positive, and do yoga. I was surrounded by marathon runners and they were great. The triathletes were great. It was all good, but it didn’t scratch that itch. But then I found the ultra runners — and I knew these were my people. I didn’t have to explain anything. We had a connection. We’re running the same miles on the weekends, sacrificing time and waking up early. We’re making a commitment to be better people.  For me, it was falling in love with that process: I sign up for a race, and I know what I’m going to be doing for the next eight months. I know where I’m going to be; I know where I’m going to be eating. It keeps me from being where I was ten years ago. This is a healthy outlet for me, and fortunately I have a supportive family who understands and gets it. There’s no way in hell I could do a fraction of what I do if I didn’t have a good support system.

How did you come up with the idea for the city perimeter run?
I knew that my races were going to be cancelled. I was supposed to be in Connecticut this past weekend doing a 100K. I had a 100-miler in Virginia June 6th, and a 100-miler in Vermont in mid-July. It’s all cancelled. So as a way to stay sane, I did the David Goggins “4 x 4 x 48 challenge”: 4 miles every 4 hours for 48 hours. That was awesome. As I was doing that challenge, the picture from Jessica Meir the astronaut had posted a picture of Philadelphia from outer space. She posted that on March 5. That was floating around in my brain. I was like, “Damn!” I had a Rebecca Barber moment, like when she planned the Rocky 50K inspired by Dan McQuade’s Philly Mag article. I saw that picture and I was like, “I’m doing this!” 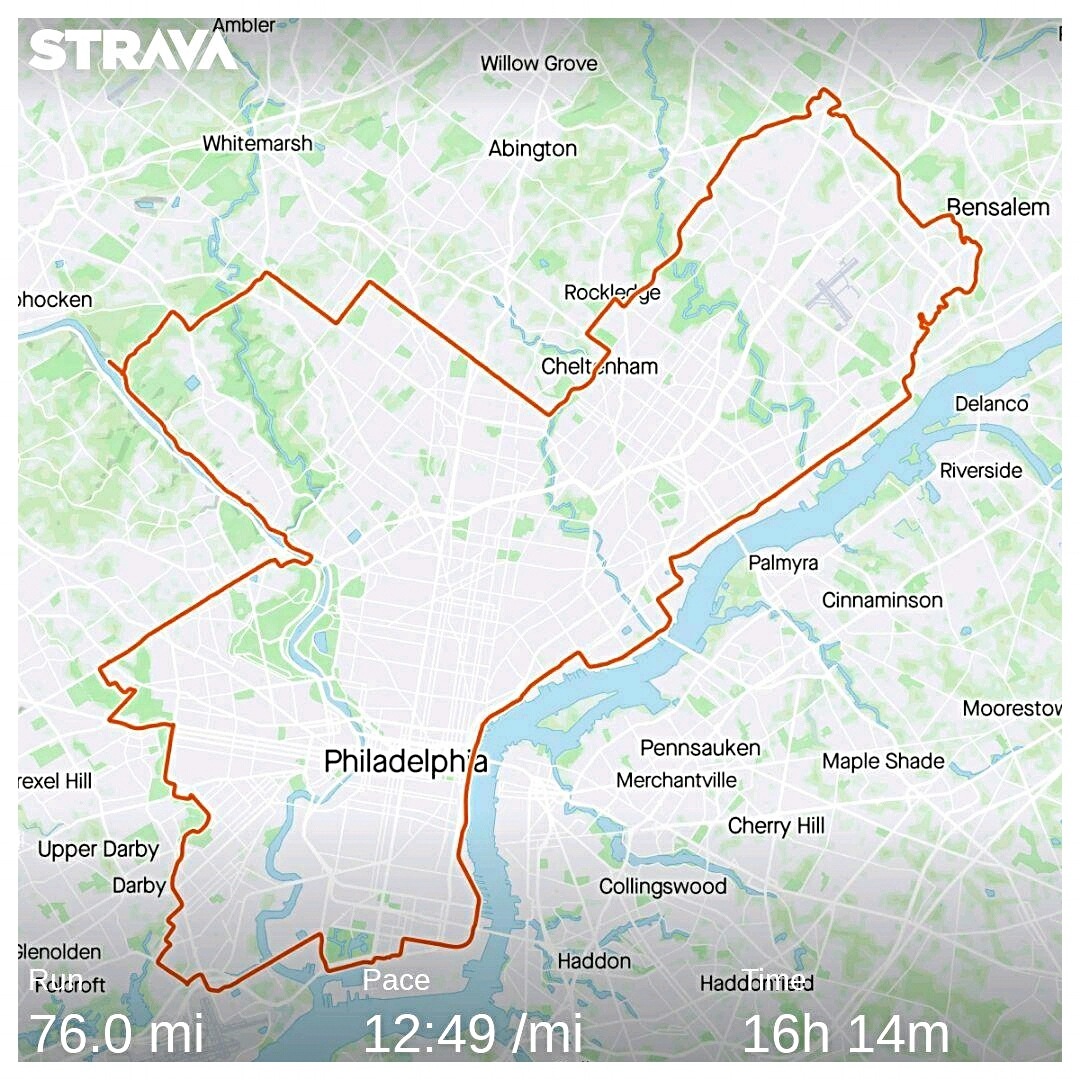 And this was the right time to do this, since your work disrupted with the crisis, right?
Yes, it was. I work for the City of Philadelphia as a supervisor in the probation and parole department. I’ve been there for the last 16 years. The courts shut down mid-March. We were supposed to go back in early April initially. I found out the courts were going to be closed through April, and I needed a way to stay sane. So, I started working on this project. I spent pretty much the first three weeks of April driving around the city, taking notes, spending time on Google Maps. I even went so far as to record runs privately, so people in other neighborhoods wouldn’t see my runs on Strava and question what I was doing on say, Cobbs Creek Parkway.

Where do you live in Philly?
I grew up in far Northeast Philly, in a little neighborhood called Modena Park. Now I live in Somerton, another section in the far Northeast. About a block from my house there are streets with no sidewalks — that’s how suburban it is, so it’s kind of tucked away. It’s quiet.

Did you mostly work on the plan for the route yourself?
Here’s the thing, everyone’s races have been cancelled — and ultra runners, we’re all kind of chasing that dragon. I have friends that are running a half-marathon every day for months, a marathon every day for seven days, I have friends running every street in their township, a whole zip code. Everyone is doing all of these crazy challenges. I only told two people initially of this run, and when their eyes lit up, I swore them to secrecy. Both of them did help me out with the run as well: Jeff Bauer and Darren Damone. They paced me each for about four or five miles towards the later half of the run. Wesley Celestino and Eddie Gieda also paced me. Eddie met me at the Ben Franklin Bridge and ran me out to 63rd and Market. He paced me for 20 miles of that run.

What was the most difficult part of the run?
Eddie and I crossed the George C. Platt Bridge together. I’ve run through all kind of conditions, but that bridge was treacherous. It spans three miles; the walkway is maybe four feet wide, and the railing only came up to my hip. It gave me a bad feeling in my stomach. It’s so long, and you can feel the vibrations as you’re running. When you look down, you can see all the way down. It’s like a barren wasteland. 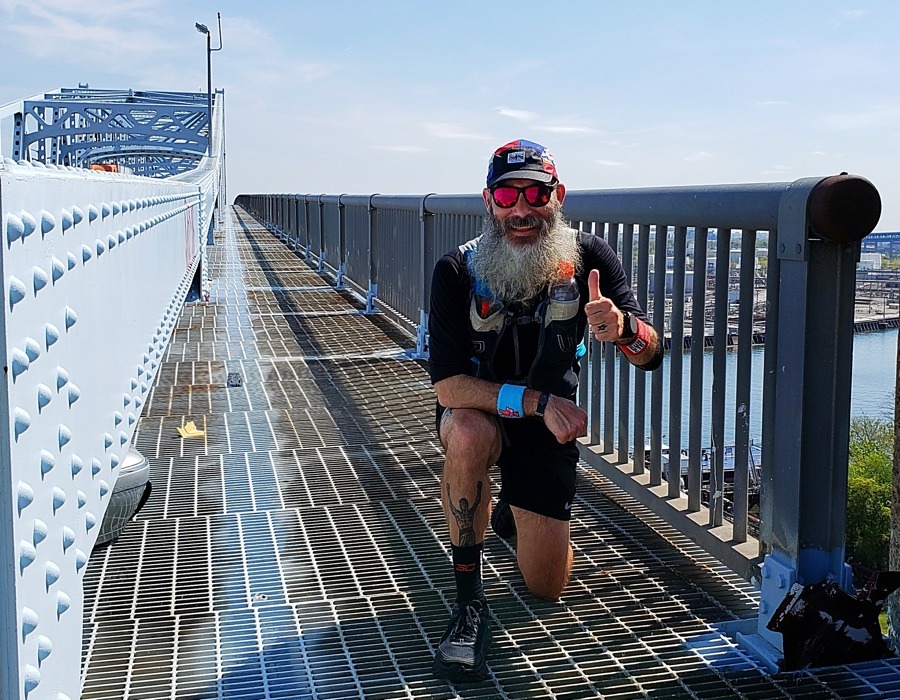 Are there any other areas people trying this out should be careful?
Coming off of the SRT, I found Manor Road to be kind of tight. The other motivation for doing the run at this time is that the roads just aren’t as crowded or congested as they normally would be. It’s hard to say in normal circumstances. Manor Road was very tight; it was an uphill section with no sidewalk, very little shoulder, and going through a wooded area, for almost two miles. But it’s crazy how empty things are. I was standing in the middle of 63rd and Market for a picture, and there was no one behind me.

How did you handle the masking and running recommendations?
I had a buff around my neck and I pulled it up over my face when I passed people. In most sections of the city I didn’t have a problem, but I was surprised by the amount of people on the SRT. It was crazy!

Makes sense. And how did you celebrate after completing this?
When I got done, my wife had pizza from Michaelangelo’s — pepperoni, light sauce, well done, just the way I like it. When I got to the car I didn’t know she had it waiting for me. I opened the trunk to get my gear off and that pizza smell was wafting out. It was incredible.

Sounds incredible. Why did you want to create with this route?
Frankly, my goal — and this sounds so corny. But I really just wanted to give a nice, clean, safe route for everybody to run and bike. You don’t need to be an ultra runner to do this. You can do it piece by piece by piece. You can do a 5K every Saturday for months if you want to. This is something for everybody to do.

Anything else you want the Philly running community to know?
I’m extremely proud of the map. I put a lot of time into it and I really want people to give this a shot. I want it to be a thing here in Philly. And I think it can be a thing. I told my boys this today —  I said to them, listen, in life, you’ve got to have a positive attitude, work hard, and surround yourself with the right people. I try to drive that home as best I can, through words and by example. That’s what I want to put out there to anybody — the principles of running can apply to anything in life.