Her daughter was given a three percent chance of surviving, but the Children’s Hospital of Philadelphia saved her life. 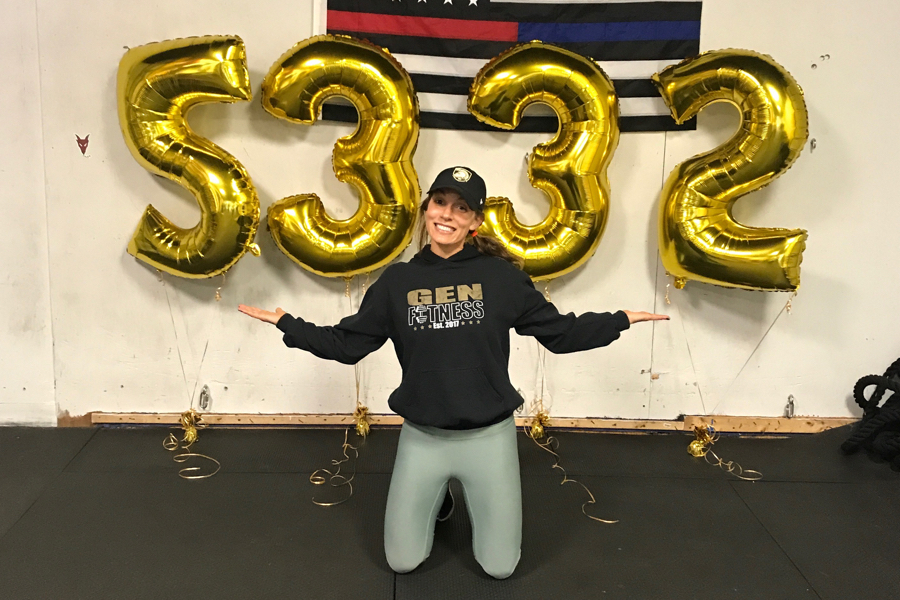 Gena Laielli broke the world record for burpees while raising money for charity at the gym she co-owns, Genfitness. | Photo Courtesy of Gena Laielli

Gena Laielli, 37-year-old mom of two, and co-owner of Genfitness in Somers Point, New Jersey, broke the women’s burpee world record this week. She completed a whopping 5,332 burpees over one 12-hour period. (Given that we can barely do 10 burpees without collapsing on the floor, we are more than a little impressed.)

The burpee-world-record-breaking occurred in an event Laielli put on to fundraise for Pancreatic Cancer and Omphalocele awareness, with funds donated to CHOP and the Pancreatic Cancer Association. We caught up with her about how it all happened — and why she felt to strongly about raising the money.

How did you get into fitness?
Growing up I played field hockey, ran track, and was a gymnast. I started training people when I was 18 years old, while I was in nursing school. People were scared of my classes because they were tough, but they loved them, and that just made me fall in love with fitness. I push people — I love that moment when they think they cannot do something and they do it. The look on their faces is priceless.

Sounds like a good reason to make fitness your career. And now you own a gym full time?
I co-own Genfitness with my brother Vincent Rivera, along with being a nurse and personal trainer. I worked at Newark Beth Israel in Newark for six years in the emergency department, and Bayada Nursing. I don’t work as a nurse currently since I had my children, but I still keep my license active. Genfitness had its two-year anniversary on January 13th. We’re a class-based gym that specializes in functional fitness mixed with military movements. Every day is a muscle specific group mixed with overall cardio, and our classes are only 50 minutes. We do not use machines because I believe your body is one.

Why did you want to fundraise for CHOP?
My daughter, Emma, was born with an Omphalocele. An Omphalocele is when a baby is born with their organs on the outside of the body. Hers were on the outside of her body and covered by a thin membrane. She was given a three percent chance of surviving. Emma’s was one of the worst cases they had seen. We were in the NIICU for nine and a half months. She was fully ventilator dependent, trached, tubed, and had plastic expanders put in to stretch her out.

There was a specialty surgery they had to come up with because she wasn’t tolerating any tube feeds. They never performed this type of surgery with an Omphalocele baby so we weren’t sure it was going to work. It did, and it’s now used on others that have had the same complications as Emma. Emma is now six years old and you would never know everything she went through. The Children’s Hospital of Philadelphia saved her life.

How did your fitness journey evolve when you had your daughter?
When my daughter came home from the NIICU we had home care nurses come to the house. Of course I could have left the house and go to the gym, but as Emma’s mom I didn’t want her to rely on the nurse to take care of her. I was her mom. So I built a gym in my backyard. I ran around the block with a thirty pound log, kettlebells, and ropes. You name it, I had it!

I honestly feel that my daughter has pushed and molded me into the person that I am today. I’m in the best shape of my life now, compared to 20 years ago. My daughter is the strongest human I know and she pushed me to be the strongest mom for her. 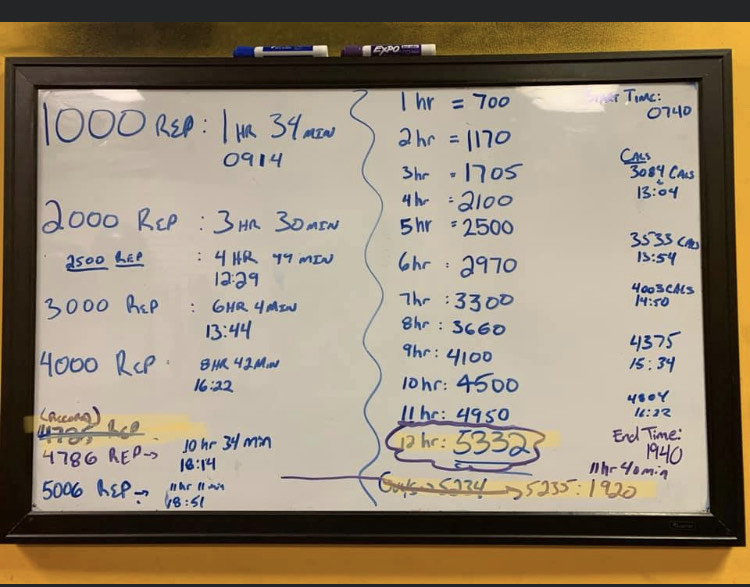 The chart for her burpee world record attempt. | Photo Courtesy of Gena Laielli

Why did you also include Pancreatic Cancer Association?
A few of my friends’ moms passed away from Pancreatic cancer. I know their moms would be so proud of the people they have become. We wanted to raise awareness for them. We planned the event and had a gift basket auction in which local business donated items to be raffled off.

How did you get the idea to do burpees?
Someone had tagged me on Facebook about the burpee world record, saying, “We should totally do this.” She planted the seed and it grew. I applied the next day and honestly I never thought it was going to be seen because applications take a minimum of three months to even be looked at. Two weeks later I got an e-mail saying my application got accepted. It was go time! We decided to do a Burpee-o-Thon or a Burpee Marathon at our gym, Genfitness, on January 11th.

And you ended up breaking the Guinness World Record for burpees?
Yes! I completed 5,332 chest to ground push-up burpees in a 12 hour period, from 7:40 A.M. to 7:40 P.M. This has been the most I have ever done in one time period and it’s also the longest I have ever exercised at one time. The record for female is 4,785 chest-to-ground push-up burpees in a 12 hour period. I did it for 12 hours and I hit 5,332.

So, are you going to be officially in the Guinness Book of World Records now?
Everything is still getting processed through Guinness and it takes a few months for everything to get reviewed. We had three cameras, six independent judges, a counting clicker, log book, measurements, and about 75 pages to be filled out along with a huge crowd cheering me on. It’s a process. But honestly it feels amazing.

It still hasn’t sunk in that I did 12 hours of burpees. That’s a whole nursing shift! But I’m so glad I did it because it definitely raised awareness and it also shows that when you put your mind toward it, you can accomplish everything. What made everything worth it was my daughter finishing out the last ten minutes of my 12-hour burpees with me. That touched my heart more than anything.