Trainer Anna Claire Loper wanted to create a space where anyone could feel safe and strong. 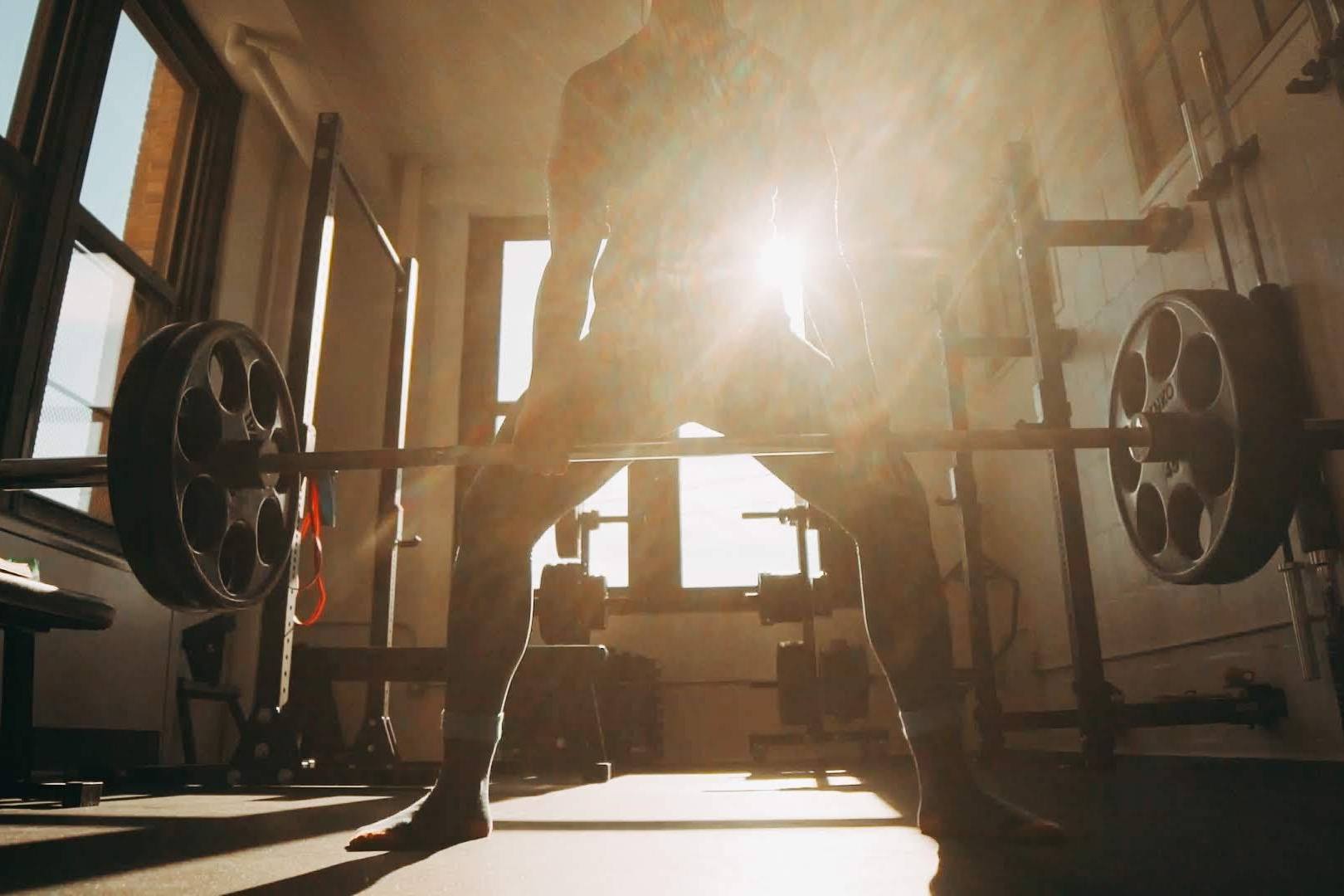 South Philly’s Bok building is still waking up at 7 a.m. on a recent Tuesday. Its tenants — artisans and nonprofit directors and hair stylists — haven’t started their thrum of activity yet, and the place feels more like the public high school it used to be, with its empty hallways and untouched lockers, than the makerspace and rooftop bar it’s become.

If you take the elevator to the second floor, though, the thunk of sandbags and the clang of barbells echoes down the halls. You can trace the sounds to a corner room, where the early-morning haze filters in through two walls of windows, casting light onto moving, grunting bodies. The KG Strong community is up early, grinding out strength training circuits before they head off to the other kind of grind, the one that, most of the time, doesn’t feel half as empowering as throwing a medicine ball against the wall and feeling its weight come back heavy against your chest.

In a corner alcove are two power racks, placed close enough that lifters might accidentally trade beads of sweat. The proximity creates the sense of a separate room, as if the five people bench pressing and/or teasing one another are the only ones in what’s otherwise a large, open space. There’s Amanda Faller, the shortest of the group, who makes lifting 185 pounds look like she’s flinging around a stick. There’s Nick Jonczak, lithe and tattooed with a penchant for tiny shorts, who’s constantly making minuscule adjustments to improve his technique. There’s Catie Borzillo, a white woman whose eyes light up, even as her breath catches, when she’s squatting heavy weights. There’s Nadia*, wearing a shirt that reads “I support trans lifters,” bickering about her form with Anna Claire Loper, her wife and the coach of this unlikely crew — the first to participate in KG Strong’s Badass Beginner Barbell Series.

They came together in early February with virtually no powerlifting experience (except for Loper, who’s trained with barbells for about five years). Jonczak, a KG Strong regular, joined because he wanted to gain 20 pounds of muscle. He hadn’t engaged in powerlifting before because, he says, “growing up as an artistic queer boy, gyms and powerlifting never felt like a space I was allowed to occupy.” Nadia, who identifies as gender non-conforming, was preparing for top surgery and knew she needed to build up her strength to set herself up for a smooth recovery. Plus, she wanted to develop her pecs, “so the surgeons would have a better path for carving,” she says.

It’s difficult to imagine having these types of conversations in the machismo-scented culture that infuses most weight rooms. The idea that women, too, can pick up heavy things and put them down is becoming more accepted, but whether that openness actually carries over to gyms is a toss-up at best.

If you’re on the LGBTQ spectrum, you’ve got to deal with all kinds of other barriers. (Last year, Quartz dubbed CrossFit “the new contender for gayest sport on the planet,” but that discipline operates a bit differently than powerlifting.) There’s been plenty of heated conversation around transgender athletes specifically, especially with the recent introduction of the Equality Act — which would ban discrimination based on sex, sexual orientation, and gender identity in many spheres (although not explicitly sports) — in Congress. In January, USA Powerlifting (USAPL) changed its rules surrounding transgender athletes; the organization no longer allows anyone taking testosterone to compete in sanctioned events and prohibits transgender women from participating in female categories. Backlash ensued, and Loper says the organization is now voting on the policy in early May.

Loper, who identifies as queer, competed in USAPL events for two years and says the organization saw a definite increase in women during that time period and probably more queer folks as well, although she doesn’t believe USAPL ever tracked that population. But, from a gym perspective, she hasn’t seen a whole lot of bonafide queer lifting spaces.

“I think barbells are intimidating,” Loper says. “They look ominous. They are iron; the plates are big, they’re heavy to carry around. They make some noise. Sometimes they make a lot of noise. And, for a long time, they belonged to a certain type of person in a gym — belonged in air quotes. That’s the empowering thing. It’s like, ‘Hey, remember all those times you felt insecure or not sure what you were doing in a gym? And you realized there was a space in the back where all the big men hung out?’ We are reclaiming that space. Or maybe not even reclaiming. We are claiming that space. We’re carving out a space for us here.”

For 12 weeks, the Badass Beginner Barbell-ers met at 7 a.m. on Wednesdays and Fridays, with a few exceptions. Each day, they’d work on two of the three main powerlifting moves — the bench press, the deadlift, and the squat — attempting to do three sets of five reps with a given weight.

Some of them had lifted barbells casually while others were completely new to the form. Before talking about technical elements with Faller, for instance, Loper gave her an assessment where she had to do basic push-pull movements. “I had no bar, pun intended, for what she was capable of,” Loper says. Now Faller is benching more than 100 pounds; Loper says over 95 is “big leagues for women.” Jonczak is particularly proud of how the program has shaped and toned his butt (which, wow, could easily have served as the model for the peach emoji).

Borzillo might be the one who’s progressed the most, given her own body weight and her starting weights. Loper calls her the perfectionist of the group, a tendency that’s both her strength and downfall. Beginner lifters can make huge gains in a short amount of time, but Borzillo beat up on herself if she didn’t PR every single week, a growth pattern that isn’t sustainable even for novices.

That’s where the partnerships came into play. Loper paired Faller with Nadia and Borzillo with Jonczak based on height similarities. The partners were there for safety reasons (everyone needs a spot sometimes) but also to comment on mistakes and encourage one another along the uneven path to improvement.

Jonczak would point out when Borzillo’s pinky finger curled under the bar while she was bench pressing. Borzillo was on the lookout for when Jonczak’s ribs flared during squats. Nadia remembers once suggesting that she record Faller when she was “doing something funky,” and Faller’s squat improved from watching the video. When Nadia was struggling with a bench press, Faller would tell her to stop her set early and refocus — and the next rep would be better.

The serious, technically focused times have been punctuated by singing, “GET SWOLE” in a Valley Girl voice and dancing to ’90s house music, a genre that was reserved for Fridays. On that particular Tuesday — a change of schedule because Loper and Nadia were heading to Boston for Nadia’s top surgery later that day — Jonczak and Borzillo are sing-songing back and forth. “I don’t care what anyone else thinks,” Jonczak says. “I have the best partner.” “No, I have the best partner,” Borzillo sings. Nadia’s asking Amanda a question about her dog. They’re all messing up the math, a frequent problem because they have to add or remove weights on either end of the barbell and include the barbell’s 45-pound weight every time they calculate how much they should be lifting. (They write their records on Post-It notes and stick them up in a corner of the gym to track their progress.)

Loper’s posted up so she can see both groups, adding critiques and encouragement when necessary. She and Nadia in particular have a constant back-and-forth going. “I pumped a little bit too hard and dropped it to my chest,” Nadia says. “Then don’t do that,” Loper responds. “Do you feel your lats?” Loper asks. “No,” Nadia says. “Cool,” Loper says, looking like she’s attempting not to roll her eyes.

When asked about how their relationship affects their dynamics at the gym, they had similar perspectives.

Nadia: “I think there was one week very early on where I was having a really hard time deadlifting, and Anna Claire sort of cracked a joke about it, and I got in a real mood later. Even if it’s just your coach and you’re not married to the person, it’s hard to take criticism sometimes. But for that person to be the person you love the most in the world and for them to be saying, ‘It’s because you’re not doing x, y, and z,’ you’re like, ‘I know, Sherlock.’ To not be sassy about it or a douchebag is hard.”

Nadia: “If I do something well, and I’m hitting depth and come back up, she’ll curse or say something like, ‘That’s it, Nadia.’ You’re just like, ‘Yes.’ The praise is sweeter.”

Whether she’s married to them or not, Loper is conscientious about her word choice with the lifters (“I try not to use language that’s gendered or ableist or any ists, really,” she says) and doesn’t give anyone cues to shift their form unless she’s gotten verbal consent. Eventually, once she’s more established, she’d like to make a space for those without the means to afford the $480 to $600 for the Badass Beginner Barbell program, too. (The intermediate program, which Loper will offer for the first time starting next Wednesday, costs slightly less.) Right now, she’s not set up to offer a sliding scale but says she does feel a responsibility to make sure that fitness is accessible to all — regardless of limitations.

In the eyes of the current members, she’s already succeeded. “KG Strong and AC’s barbell class make space for me to be queer AND strong,” Jonczak wrote in an email. “I don’t have to choose between the two.”

The next session of the Badass Barbell Beginner Series will take place Mondays and Wednesdays at 6:30 p.m., starting Monday, April 29th, at KG Strong. Sign up here.

*Nadia’s last name has been withheld to protect her privacy.