Paul Helms turns to the Hypervolt, a "jackhammer for your muscles," to relax your body and improve mobility. 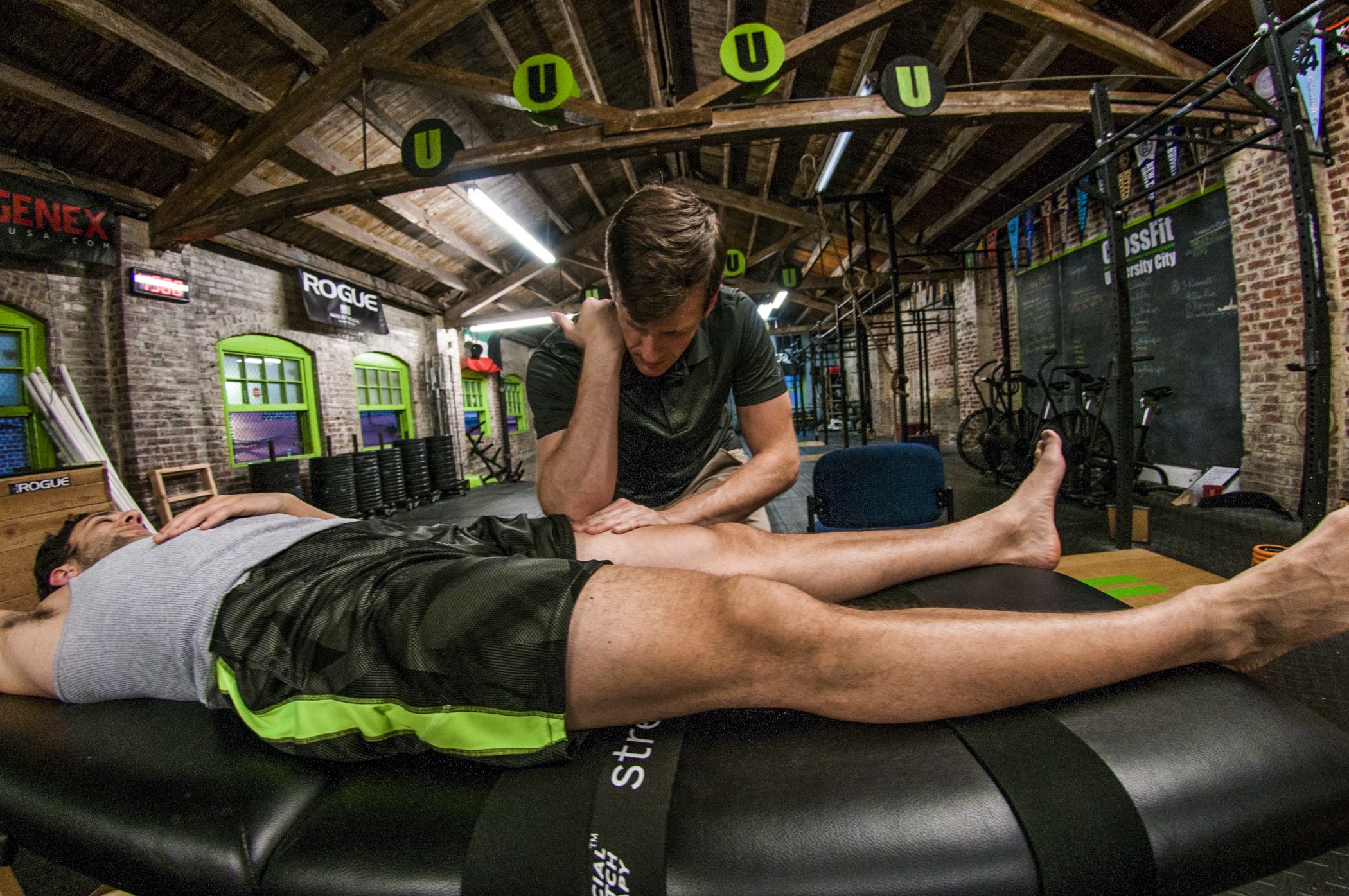 After my first sports massage at Helms Performance, I almost didn’t go back.

I’d signed up for a three-session new client package at a discounted rate, figuring I’d get my money’s worth for a modality I’d never tried before. And massage therapist Paul Helms had come highly recommended. As a former collegiate rower, he’d personally experienced the wear, tear, and muscle imbalances that come with being a serious athlete, and, by this point, he’d had his hands on everyone from CrossFit junkies to aerialists to professional football teams. (The Oakland Raiders visited Helms in 2017 before they played the Eagles on Christmas Day. The visitors lost, but nothing, not even a gifted massage therapist, could have stopped the birds that season.)

Very, very wrong. I knew reality was going to differ from my expectations as soon as I walked into CrossFit University City (what massage therapist works out of a CrossFit gym?) and peeked behind the curtain Helms had set up in a corner. It was a no-frills set-up: a massage table, a small space heater, a chair, and several posters of the human body. While Helms, a strong-jawed, seriously ripped man with a schoolboy haircut, was conducting my movement and muscle quality assessment — asking me to stand up straight, activate my glutes, and lift my arms in various directions — he frowned, said concerning things like, “Oh, that’s not good,” and pointed to the posters, throwing out anatomy terms that I didn’t understand. Essentially, he was explaining that my body was all out of whack.

This didn’t surprise me. My shoulders have genetic defects that make them prone to dislocation, and I can physically move my left ball and socket up and down, complete with a concerning cracking noise. I imagine this *might* affect the way I carry myself. Plus, I’m a notorious sloucher, a habit I’ve likely picked up from sitting in front of a computer screen for eight to 15 hours a day for years.

Helms’ reaction, though, gave me the sense that my body was going to give out without warning and crumple to the ground one of these days. While lying on the massage table, I mentioned this in a joking manner, hoping to get a laugh. He responded with, “Well…” That was when he pulled out the Hypervolt.

Have y’all heard of this demonic device? It looks like a ray gun, or some other sort of futuristic weapon that an Incredibles 2 villain would deploy, and is supposed to break down scar tissue and tight collagen fibers, so your affected muscle can more quickly and easily relax. Helms calls it a “jackhammer for your muscles,” which, you know, doesn’t sound like the most pleasant experience.

INDEED IT’S NOT. Remember that I have experienced shoulder dislocations, which are supposed to be as or more painful than childbirth. This pain, though, was otherworldly, like someone was, well, using a jackhammer on my shoulder blade. It was probably worse because I kept holding my breath in terror every time I heard the drill-like noise buzzing above my back, tensing up my body even more.

Yet Helms also immediately noticed issues that no other specialist had mentioned. For instance, he saw I couldn’t belly breathe. Initially, he’d assumed that would be a natural action for me, given how much yoga I do. What he didn’t know was that I have a strange breathing history. I couldn’t inhale or exhale through my nose until I was 12. I had some sense of smell, but it was as if I had a perpetual cold — until I figured out I was allergic to bananas, which I’d been eating every day for breakfast for years. Once I stopped eating the fruit, my nose unstuffed itself within 48 hours. But my body couldn’t unlearn the heavy mouth breathing it had developed to compensate for my congestion.

Once Helms taught me the correct belly breathing motion, I started practicing it in the week following my session. It felt intuitive and calming — diaphragmatic breathing is often used as a stress relief technique — and I began to consider it another tool in my anxiety-reducing toolbox. Although I hadn’t had time to practice the stretches Helms had assigned me, I felt good about my progress by the time I returned to the tiny CrossFit gym a week later.

Helms was a bit less thrilled, but he did praise my belly breathing, and we went through a shorter assessment with similar movements before he sent me to the massage table and pulled out the Hypervolt again. It still hurt like hell, but belly breathing helped as did the dog calendar that Helms had kindly placed on the floor below the massage table’s face rest hole as a distraction.

It was then that I started to actually get to know Helms. Turns out he’d taught himself to mimic Dug, the golden retriever from the Pixar movie Up, and the imitation was so spot-on that my cheeks hurt from laughing. (This did not help with the Hypervolt pain, FWIW.) It wasn’t what I expected from a rower/CrossFitter/overall jacked dude who had used a futuristic weapon on me, but it hinted at what I would come to find out: Helms is really just an enormous nerd who wants to help people.

This motivated me to actually do my stretches and try to pay better attention to my posture throughout the following week. I caught myself hunching or leaning on my right elbow frequently at work and made an effort to square my shoulders and straighten my back whenever this occurred. I was still behind on my homework — Helms had given me more stretches to do with resistance bands, but I couldn’t find them amid the many boxes I had yet to unpack from my recent move — but I was grinning when I stepped behind the curtain in the CrossFit gym. I had come to look forward to this hour every week when I didn’t have to think about anything else but relaxing.

My third session ended up being my last with Helms, as I pinched a nerve in my back shortly afterward, and he’s moving to Missouri in May to go to chiropractic school. (Get on his schedule ASAP.) But, by then, I knew about his vet-in-training fiancée, his love of Marvel movies, and his laugh-inducing catchphrases. (Whenever I wasn’t limp enough, he’d shout, “Dead fish, dead fish!”) I knew he’d probably throw out some scientific words that would go over my head, but I also understood this as a sign that he knows his stuff. And I knew that my nemesis, the Hypervolt, would kill my back, but it was all in an effort to make my body stronger.

The shock of all shocks was that the Hypervolt didn’t actually hurt as much the third time around. I don’t know if it was my tolerance increasing, my comfort level rising, or my scar tissue dissolving. It doesn’t really matter because I’m not sure I’ll get another sports massage, at least for a while. It would be difficult for another masseuse to live up to my “black market physical therapist,” as Helms calls himself. In the end, he shattered all expectations. He became my friend.