Channel Your Inner Kid in This New Barre-Trampoline Hybrid Class

Tuck Barre & Yoga's Barre Bounce class mixes intense barre sequences and high-flying rebounder moves to give you sensations of both agony and ecstasy. 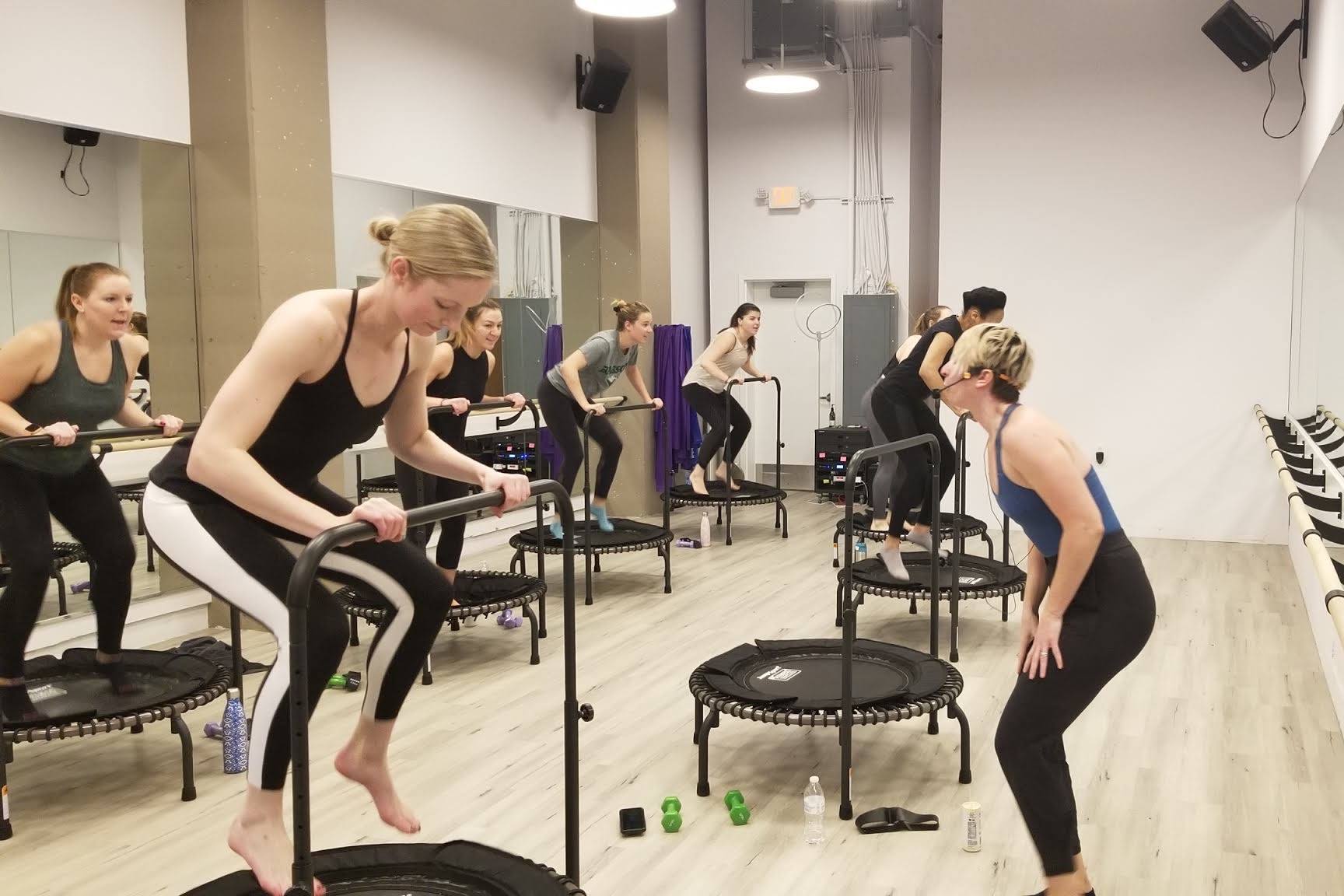 There was a moment during a Wednesday night class at West Philly’s Tuck Barre & Yoga when I thought my thighs might never move again. They were burning beyond the point of shaking, a deep pain so prolonged that my muscles had almost become numb. You know when you’re in cold water for so long that you sail right past shivering and can’t feel anything anymore? That’s essentially what was happening but on dry land.

That’s because I was in a Barre Bounce class, Tuck co-founder Callie Kim’s crazy hybrid of barre movements and jumping on rebounders (basically mini trampolines), which launched in January. Although Kim primarily turns to barre and yoga for her workouts (hence the barre and yoga studio), she’s also a fan of the low-impact rebounders — because what able-bodied human doesn’t love bouncing on a trampoline? “But I never got into rebounder classes,” Kim wrote in an email. “I always got bored, and I dread cardio, so I got anxious thinking about spending 45 minutes or an hour on the trampoline.”

The key to overcoming that barrier? A rebounder with a handlebar on the front. Given my relative inexperience with rebounders, I initially assumed that all of them had this handy feature but turns out that’s not the case. As a result, most rebounder classes encourage you to bounce lightly rather than soar into the air. Which is all well and good, but, personally, I think I’d be far too eager to channel my childhood tendency of trying to leap as high as I could on a trampoline and promptly fly headlong into the mirrors, break them, and injure myself.

Kim felt the same way. In fact, a rebounder with a bar made her so much more comfortable bouncing that she started working barre sequences into her trampoline workouts, and Barre Bounce was born. “I realized A) it’s incredibly difficult,” Kim wrote in an email. “B) It enhanced the interval training aspect because the strength intervals give your heart rate a chance to recover, and C) It made bouncing even more fun and less boring/repetitive. (Going from a terrible barre burn to a bounce makes it feel so good.)”

Having taken the class, I agree with her on every point. Although the main bouncing movement Kim teaches is more of a power stance, with a low jump and constantly bent knees, there were times she told us to spring into the air and try to get as elevated as possible. It felt freeing in a way I don’t typically experience in a structured fitness class. For those two seconds or so, you can focus less on form and revel in the fact that you chose to move today, and that. feels. damn. good.

Thanks to the bars, we were also able to execute a variety of jumps — tuck jumps with our knees pulled into our chests, star jumps with legs spread out wide, angled jumps that were essentially butt kicks while we turned from side to side. We even put resistance bands around our thighs while we jumped, although I was so enthusiastic that my band snapped, and I spent time I could have been exercising untwisting it from my hips.

The cardio, something Tuck clients had been asking for more of in classes, was easily my favorite part. The barre sequences on the other hand — those were less fun. Kim left no muscle unworked, with light hand weights to make our arms shake and resistance bands to ensure maximum thigh burn. Everything from tricep kickbacks to curtsy lunges were on the menu (no two Barre Bounce classes are the same, so be prepared to encounter new movements every time you go), and they elicited visible pain on everyone’s faces. It helps that Kim is as real as fitness instructors come; as she directed us from the front of the room, she kept saying things like, “I’m weaker than you. I couldn’t do this all the way through. I’m really sorry, but push through.” (In actuality, she had a sprained ankle and was still teaching, so no, all of us are weaker than her.)

Given how intense the movements were, I expected to be all kinds of sore the next day. Instead, I felt limber, like I could take on another Barre Bounce workout that night. OK, maybe not, but I was still impressed at how bouncing must have stretched out my muscles enough that I wasn’t suffering from my typical post-barre aches. The only thing I regretted from the class was not laying towels on my rebounder bar for the duration of the class; my hands were sweating so much that I kept having to wipe the bar off.

Kim says her Point Breeze community is very upset that Barre Bounce is only offered at Tuck’s University City location (she’s trying to figure out how to store the rebounders at the former studio), and I’m not surprised. To jump high into the air on a trampoline is to be a kid again, no matter how many years it’s been since you stepped onto those canvas-covered springs. And we could all use a little more childhood wonder.