With the help of bariatric surgery, Mary Henderson can now say she's won a push-up challenge — and found her path forward as a fitness instructor. 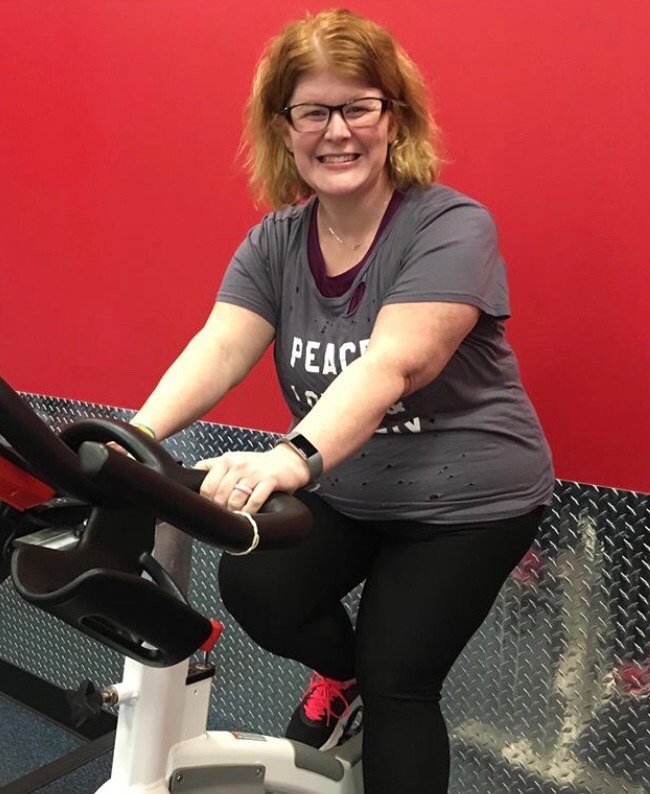 Sometimes a traumatic event, harrowing experience, or grave diagnosis can catalyze the changes in our lives we never knew we needed. In our Transformation series, we take a look at these important moments and how they’ve triggered phenomenal transformation. Contact [email protected] to submit your own Transformation story.

Who I am: Mary Henderson, 42, from Skippack

What I do: I’m the owner of Wowfit, a fitness program in Schwenksville; a registered behavior therapist; a group exercise instructor at Spring Valley YMCA; and an influencer for Athleta.

In the fall of 2014, when I was 37 years old, I had a physical and found out I weighed 347 pounds. I was diagnosed as pre-diabetic and on the verge of high blood pressure. I was depressed and anxious, and my entire body hurt. Throw in running after two active little girls (my children were two and four at the time) and working full-time, and you can get a pretty miserable person.

I blamed my weight on the anti-depressants I was on from postpartum depression that was diagnosed two years before, but I’d actually battled depression since my mid-teens. I was abused as a little girl. That was probably part of why I was obese.

I blamed bad genes. We do have precursors for diabetes and high blood pressure in our family. Eventually, though, my body was going to say, ‘You need to stop eating Oreos for dinner.’

After talking with my doctor and my husband, I decided to have bariatric surgery, specifically gastric sleeve surgery. I needed to make a drastic change in my life and based on my circumstances, this made the most sense for me and my family. My surgery was performed almost a year after that physical, on October 8th, 2015. I was able to have my husband, who’s a rock star, hold my hand through the entire thing.

At first, my goal was to get healthy for my kids. It was hard at first because I was eating differently than they were. (There’s a very specific diet you need to follow post-surgery. The first week is a clear liquid diet; the second week you can add in protein shakes. The third week you can add in pureed proteins. Then you add in soft protein and slowly work yourself up to a normal diet.) I would still fix the normal family meal for them and then this itty bitty meal for myself.

And to make time as a working mom to go work out, that took time away from my kids. That’s the exact opposite of what I wanted to do. But if you don’t fill your own cup, you can’t fill everybody else’s. As a mom and a teacher and all the other things that I am, I have to take care of myself first.

So, about four weeks after surgery, when I was getting antsy, I joined a local gym that had basic workout equipment. I’d mostly do 30 minutes on a treadmill with the occasional elliptical or weight machine thrown in. It was a good start to my workout regime, but I grew bored quickly. I started doing HIIT classes and more intense yoga classes and really challenging myself to not only put myself out there but to learn that it’s ok to fail. Then I found a local studio that offered spin classes and got hooked. Hooked isn’t even the word — I drank the Kool-Aid and asked for more! A year later, I stepped way outside of my box and became certified to teach cycling classes.

My goal right now is to be stronger. I like to vary my workouts between spin, yoga, kickboxing, Pound (a drumming-based type of fitness), and HIIT-style classes. I do weights three times a week. I can do cardio seven days a week and never get sick of it, but weights are hard for me, not because I don’t have the stamina or strength but because they’re boring to me. But I go to Aim High Studio‘s kickboxing class on Monday mornings. There’s also a good strength and conditioning class they have there. Finding the right classes at the times that work for me has been the key to it all. One thing’s for sure: I need to be around people to work out. I have the means to work out at home, but it just doesn’t get done there.

In general, so many things have changed since my surgery. I have more stamina. I’m stronger and more flexible. I love that, as a fitness instructor, I can now help other people find their strengths. I say to everybody, ‘I don’t care if you come to Wowfit. Go somewhere else, and I’ll come with you.’

I’ve also learned to take on challenges I never would have done prior to surgery. Last summer, for instance, I entered a push-up challenge through Aim High Studio. You paid $25, and all the proceeds went to Jake’s Dragon Foundation, [a nonprofit that funds pediatric cancer research]. Every day, there’d be a different number of push-ups they’d want you to do and as long as you sent the video of you doing them, you were still in. I remember doing 140 and realizing my daughter didn’t press the record button. So I did 140 unrecorded and 130 recorded. I think I was at about 123 the second time, and I said, ‘Oh, this hurts.’ My daughter asked, ‘Why don’t you stop then?’ And I said, ‘You don’t just quit when it starts to hurt.’ I won $100, but we gave it all back to Jake’s Dragon once I opened the fitness studio (more on that in a bit).

Or last spring, I ran an abs challenge with a group of friends on Facebook where you did sit-ups for 30 days. You had to do 87 sit-ups on the last day. I actually had a little bit of definition where I’ve never seen definition before. Before the surgery, I couldn’t do one sit-up. And I probably could have done a table-top push-up, but there’s no way I could have done a high plank push-up.

And then there’s Wowfit, my fitness studio. That was a dream I had in my back pocket. I remember sitting with somebody, a newer friend, and she said, ‘Where do you see yourself in five years?’ I said, ‘Maybe I’ll open a fitness studio, maybe I won’t. Who knows?’ But then I saw this ad on Facebook that said this dance studio in Schwenksville was going to rent out their space. We opened in January. A girlfriend made me up a logo, and a friend of mine who used to come to my classes at another studio made me a website in exchange for free classes. The whole thing happened by accident — it was just me being bored at 10 o’clock on a Sunday night. But now I’m modeling my studio off of Aim High because they take care of their community. That’s the way I want to run things, and so far, it’s working.

You hear a lot that one of the downs of weight-loss surgery is going to be your relationship with your spouse. I was very, very aware of that because my husband was also overweight, and I didn’t want him to get jealous because I now had this newfound health. Thankfully my husband went the other way with it. He had the surgery two years after I did. We were able to get healthy together. Not only was it a catalyst for me, it was also a catalyst for him.

I’m most proud of reaching out to ask for help. That was the hardest part of this entire transformation. There was a time in my life where I thought that getting weight-loss surgery was taking the easy way out. I now know that nothing can be further from the truth. It’s not for everybody. I’m never going to push someone to do it. But I firmly believe that God puts something in your life for a reason. Now the whole thing is more about challenging myself and putting myself out there and hoping some people hop on board and come along for the ride with me.

What I hope people take away from my transformation is to not give up. I know you’ve tried every diet out there. I know you think it’s impossible. I’m here to tell you it is NOT impossible. There is a way for you to get healthy — not just lose weight. Did you know that you can be the ideal weight for your height, age, gender, etc., and be unhealthy? You can be 225 pounds and still healthy or 140 pounds and not healthy.

My tips: Go to the doctor. Get bloodwork done. Get a massage. Do yoga. Challenge yourself.  Find a workout buddy. Meditate. Find a tribe. Say yes. Say no. Walk away from something that no longer serves you. Don’t judge others. Don’t allow yourself to feel judged. Fill your cup first, so you can take care of others. And never, ever let others tell you your worth.