The Ultimate Guide to Winter Sports Around Philadelphia

Where to try luge, speed skating, curling, and more. 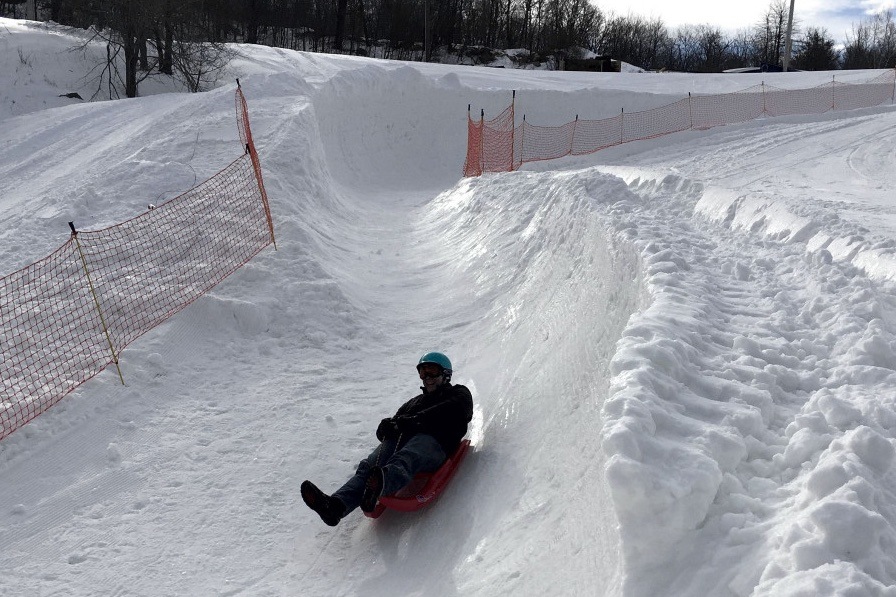 So far this winter, we’ve been pretty lucky, weather-wise. However, as the temperature drops lower so does our morale for getting off the couch. Thankfully, there are plenty of winter sports that can get us to embrace the low temps instead of hiding from them.

We live in a city that has a lot to offer, without having to wander too far outside its borders. If you’re confident that you can master an Olympic-rated sport or just want to get out of a fitness rut, there’s something out there for you. From speed skating to curling, we’ve rounded up a list of a ton of local spots to visit. Bookmark this page for a winter-inspired mix-up to your regular fitness routine.

Delaware Valley Cross Country Skiing
Where: Philadelphia, Camden and the surrounding areas
Activities include: Outlining where to cross country ski in the area

While this is more of a resource than a club or resort, this website outlines and suggests many places to hit the snow in the area. The blogger suggests visiting Wissahickon Valley Park, the Tyler Arboretum, Valley Forge National Historical Park, Fort Washington State Park, and Rose Tree Park. Of course, heading north is suggested due to their generally greater amounts of snow: the Poconos, Adirondacks, and New England.

Philadelphia Curling Club
Where: Paoli
Activities include: Curling classes are offered for those ages 18 and up, youth programs, group outings

While curling isn’t the most glamorous winter sport, it’s certainly requires skill. There are various leagues you can join (men’s, women’s, and varying experience levels) if you already know how to curl, but for the newbies in the bunch there are child and adult classes offered through the club. Currently, there are no adult curling classes scheduled, so we suggest contacting the club for details.

The Bucks County Curling Club is a year-round curling hub that has transformed an ice rink into a dedicated curling facility. Get involved with a league that fits your age and experience level at any point in the year — new league sessions start quarterly. The club offers an intro to curling experience, which covers safety practices; techniques and some game play activities for those ages 21 and up (it’s BYO, BTW).

At Ice Works, you can start at the very bottom — as a beginner — conquer the basics, and end up competing on a team. Youth, men’s, and women’s leagues are available if you already know how to play. Plus, you can score a lot of your gear — or last-minute accessories — at the rink’s pro shop.

Learn the basics and theory of hockey with the option to work on specific aspects of your game like, stick work, checking, and power skating. There are leagues for kids and adults and Flyers Zone offers a program called Lady Flyers, specifically for girls to develop more women’s hockey athletes.

Whether you’re a kid or adult, you’ll find a place to fit in at Oaks. From their instructional leagues to their higher competition leagues — based on age and skill level — you’ll be able to play safely and have a ton of fun (not to mention get in a ton of cardio!).

This South Philly rink is a city staple — whether you’ve nearly been nailed in the head with a puck from roller hockey while walking by or not, chances are you’ve heard of this spot. Open hockey is a league for those 18 and older, though there a plenty of leagues for the younger ones in the bunch, including a travel team for when they want to make the sport their life.

Open to skaters and players of all abilities, this club wants to spread the fun that is the game of hockey by teaching folks of all ages how to play. If you’re already pretty skilled on the ice, the club’s senior “A” team might be of interest to you — it has won many league championships.

Share the ice with Penn and Drexel’s college hockey teams and the Philadelphia Rebels if you choose to play hockey at the Penn Ice Rink. The Ed Synder Youth Hockey Foundation teamed up with the Philadelphia School district to offer a series of four-week hockey clinics to teach more elementary and middle school-aged kids the joy of the sport.

Open year-round, this club is the one stop shop for all things skating. They constantly host clinics, camps, and lessons for all ages to spread the skill of ice skating — which also happens to be awesome exercise. The club also features a pro shop where you can score many of your skating accessories.

This 17,000 square-foot ice rink offers a TON of space for all of your skating desires. Freestyle sessions are available for all figures skaters at certain points throughout the week, and private lessons are offered also. Ice skating lessons are grouped by age and renew quarterly.

Flyers Skate Zones offer skating lessons for kids and adults that have a desire to glide atop frozen water. Lessons include 30 minutes of instruction and 30 minutes of practice-oriented free skating. Figure skating workshops and summer camps are also available.

For more information on all things ice-skating around Philly, read our guide here.

So, Blue Mountain’s luge track is kind of a big deal — it’s the only natural, snow-made luge track on the East Coast! Available only to those aged ten and up, challenge your friends and family to a race down the track. If you win, you might even catch the eye of some Olympic coaches, who are known to stop by and scout.

Bear Creek Mountain boasts 23 trails that will keep every level of skier or boarder entertained on the 86 skiable acres. Rookies will enjoy the expanded beginner area complete with a carpet lift and triple chair and pros will be challenged on “Sasquatch,” a black diamond trail with a 50-percent slope. Choose from a myriad of lesson packages for folks of all ages and skill levels.

This Pocono ski resort home to twin mountains, Jack Frost and Big Boulder, is a prime spot for hitting the slopes. Jack Frost has 20 trails and a terrain park, beginner through expert, 100 skiable acres, a 600-foot vertical, and 12 chairlifts. At Big Boulder, you’ll find 16 slopes and trails, beginner through expert, a 475-foot vertical, 55 acres of skiable terrain, and eight lifts. Lessons are available for those ages three and up in both private and group lessons.

Camelback Ski Area has 37 trails on 162 skiable acres, an 800-foot vertical drop, and 16 lifts, including two high-speed quads, three triples, five doubles, and two tubing lifts. There’s also a snowboard halfpipe, two terrain parks, and a wide selection of trails for all ability levels. Snowmaking and night skiing (with lighting!) is offered on all trails. Plus, lessons — both private and group — are available for kids, adults and those with disabilities.

For more information on all things skiing and snowboarding around Philly, read our guide here.

New skaters are always welcome to this short track speed skating club. If you’re new to the sport, you should join their practices on Saturday and Sunday mornings. They typically practice at the Power Play Rinks in Exton or at the Body Zone in Reading. Check here for more information on how to join the squad.

Learn from a professional at this rink. Weekly speed skating sessions are hosted most Sundays by Olympic speed skater, C. Kyle Carr, who participated in the 2014 winter Olympics. All ages are welcome and a limited number of speed skates are available for rental, though they are not mandatory for the session, which will run you $20.

This New Jersey speed skating club utilizes two local ice rinks for year-round instruction of beginners and nationally ranked competitors. The club is fortunate enough to have a two-time Olympian on their coaching staff, Tianyu Fu, who is one of the best female short track skaters in the world.