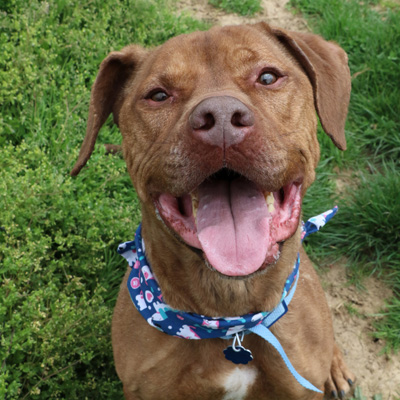 The Monster Milers tell us this week’s adoptable running dog Elroy is ACCT’s (that’s Philly’s open-intake shelter) longest-term resident. Let’s change that, shall we, Philly runners? But first, learn more about him below.

Running style: Elroy has been called an “excellent” runner by pretty much of all of his volunteer running friends. He’s easygoing and will match your pace and doesn’t pull on his leash or zig-zag. Elroy has already worked up to a couple of miles with his volunteer friends. Because he’s such a good runner, he’s been training newer Monster Milers volunteers as well as running with more experienced runners. Elroy has consistently been a solid running partner, and a bonus is that you can see his adorable ears flopping up and down while he trots next to you.

Why Elroy is awesome: Elroy is a really happy dog! He’s also a goofy klutz and will make you laugh with some of his antics. He sometimes runs into things like trash cans and then looks at you like, “Hey, where did that come from?” Don’t let his clumsiness fool you, though — Elroy is really smart and has already learned “sit,” “down,” and “touch.” He’s treat-motivated which makes him eager to learn more commands.

If you’re interested in adopting Elroy, stop by ACCT, open 365 days at year, at 111 West Hunting Park Avenue and ask about adopting. His animal ID is A35064869. For more information about the adoption process, visit their website. And for more awww-worthy photos, check out our previous adoptable running dogs here.