Philly Has Set Open Streets Every Weekend (So, Why Aren’t You More Excited?)

This four-mile stretch closes to cars every single weekend. Why aren't we all shouting about it from the rooftops? 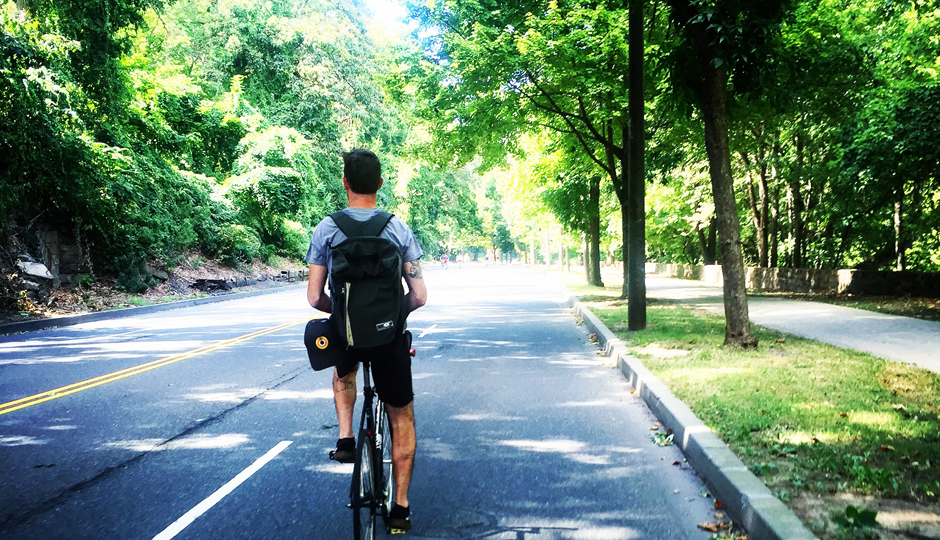 Nearly a year ago, we were all jumping up and down with joy at the announcement that we would be getting our very first official open streets event, prompted by the intoxicating freedom of being able to roam throughout the city streets, zero cars in our way, during the Pope’s 2015 visit. But the thing is, Philly has (and has had for a long time) a set seasonal open streets event of sorts that gives cyclists, runners and walkers the opportunity to peddle, pound the pavement, and stroll the streets in a car-free space every single weekend.

When we’ll get our next Philly Free Streets event has yet to be announced, but weekends of seasonal car-free streets just started back up again this month. Soooooo, why aren’t we all shouting about it from the rooftops?

Back in September, when I set out to take on the nearly 10-mile Philly Free Streets route on my bike, the stretch from Front and South Streets through to the Schuylkill River Trail was a human traffic jam of epic proportions. People were just so excited to be in the streets — even if it meant being at a standstill. When I finally made it to MLK Drive, though, it was like passing an accident on a highway. All of a sudden, the room to ride along the route opened up. Sure, there were some other cyclists and runners on the wide-open lanes, but not nearly as many as were on the clogged crossways of South Street. It. Was. Lovely.

But riding that road without worry about traffic was nothing new to me: From April through October, MLK Drive, which runs through Fairmount Park, is closed off to cars every Saturday and Sunday from 6 a.m. to 5 p.m. so that runners, cyclists and pedestrians can use the lanes freely (though the portion between Eakins Oval and Sweetbriar Drive reopens at noon). My boyfriend and I frequent the stretch often, and usually feel out of place amongst the cyclists decked out in unitards, whizzing past us in training mode as we mosey along the four-ish-mile car-free stretch.

And while there are plenty of serious cyclists who clearly enjoy having space they’d never get on the SRT to test their speed, the car-free, tree-shaded lanes — such a perk for us city folk — still seem to be, like Women Bike PHL founder Katie Monroe pointed out earlier this week, a pretty well-kept secret.

So my question is this: Come April of every year, why don’t more people seem to get as pumped about these weekly street closures as they would, say, an official open streets event?

Maybe it’s that, despite the seasonal closures being a tradition that started over 20 years ago, many people simply don’t know that they have these car-free streets available to them. On the day of Philly Free Streets, as we rode along the closed-to-cars MLK Drive, my friend who was biking alongside me under the canopy of soon-to-turn tree leaves, a born-and-raised Philadelphian, exclaimed, “This is SO nice,” with no idea that it was available to her every weekend. So, there’s that.

Curious to chat with someone who could provide some insight on why this awesome resource never seems to be quite as packed with fitness enthusiasts as I’d expect it to be, I reached out to Chris Dougherty, a fellow fan of the MLK Drive closures and the capital projects manager for the Fairmount Park Conservancy. He spends much of his time, as he describes it, “implementing park improvements with an eye towards transportation enhancement,” both when it comes to cars and non-motorized transportation, so he knows a thing or two about this stuff. (Fairmount Park Conservancy doesn’t manage the MLK Drive closures.)

One obstacle that could prevent people from embracing the open streets of MLK Drive (and therefore shouting about them from the rooftops), he pointed out, is the treacherously slim bridge walkway you have to brave in order to get from Eakins Oval to MLK Drive. I have a damn near panic attack every time I have to cross this bridge (just ask my boyfriend, who has to coach me through it. Every. Single. Time), so I’d have to agree that this might be reason enough for folks to say “forget it.” (The good news when it comes to this is, if you’re opting for a longer ride or run, you can take the SRT to Falls Bridge, then cross over to the open MLK Drive, go the four miles and back, and cross back over Falls Bridge. Obviously, this isn’t ideal for everyone, though.)

Dougherty also mentioned that access (it’s not the most obviously accessible spot to get to, by car or public transportation; if this is stopping you from checking it out, goPhillygo is a great getting-around-town resource) and a lack of signage where it junctures with the SRT might come into play when it comes to it feeling like a secret. He noted that maybe more activation (aside from the many charity races that take place, usually in the mornings) along the closed-to-cars streets could be what’s needed to draw people out. For instance, “I do see a fair amount of families out there and I do think it’s a good place for people to learn to ride.” His point: Maybe cycling safety classes would be the perfect fit for activation. “I think it’s a broad canvas for a lot of possibilities,” he says.

But, Dougherty notes, there’s a thin line. “You want to keep the flow and not impede the flow.” In other words, no one — especially the cyclists and runners who enjoy the seasonal closures with plenty of room to roam now — will enjoy the car-free streets if they become too crowded. This is a fair point and, quite honestly, could easily be why the people who do enjoy these closed-to-cars streets don’t shout about them from the rooftops. That said, there is a generous amount of space out there, with four car lanes, a path, and an often-wide stretch of green separating the path from the river. So activation — like, say, outdoor fitness or yoga classes — wouldn’t even necessarily need to bleed into the road.

All this considered, as someone who considers the car-free streets of MLK Drive to be a serious perk to living in Philadelphia, I’m curious to hear your thoughts on why they don’t seem to generate the kind of excitement that, say, a few-hours-long Philly Free Streets event does. Is it just that they’re old news? Feel free to share your thoughts in the comments.