Eakins Oval Is Returning As a Summertime Pop-Up Festival

The Oval XP will bring activities, a beer garden, and a giant Ferris wheel to the Parkway this summer. 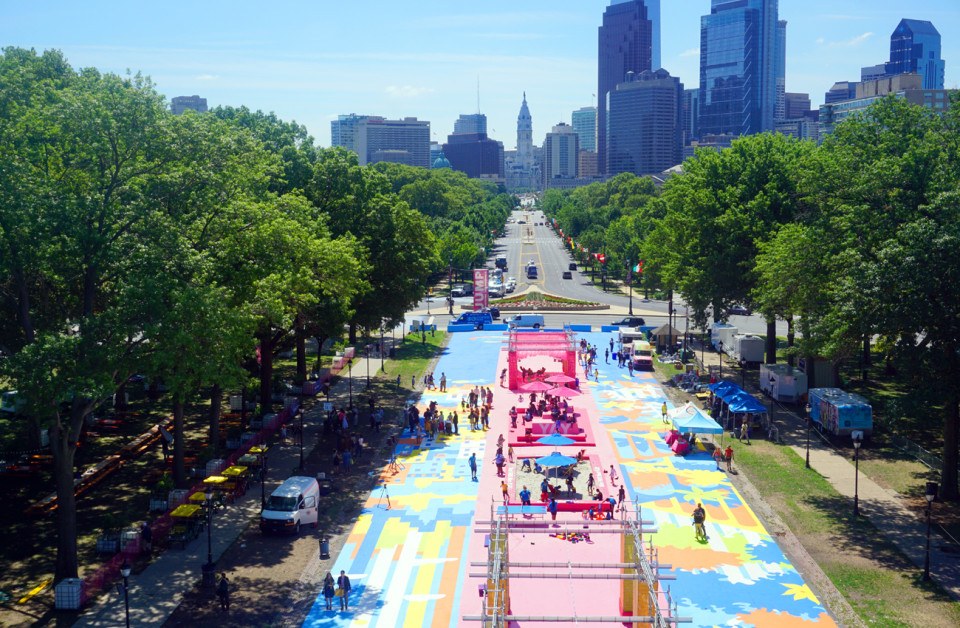 The Oval’s ground mural in 2019, as seen from above / Photograph by Laura Swartz

The color is coming back.

Back in 2013, Philly’s Parks & Rec department started painting the drab parking lot on Eakins Oval with vibrant colors and filling it with family-friendly fun for the summer months. One of those years, I got to ride up in a cherry picker on Media Day to snap a photo of the ground mural in its entirety — it was quite a sight against the Parkway. Well, after three summers off, the Oval will once again be filled with color, activities and a beer garden. And new this year: They’re installing a 108-foot-tall Ferris wheel so everyone can get that bird’s-eye view I once enjoyed.

The pop-up — dubbed Oval XP this year — will open on June 16th and run through August 21st, its longest seasonal engagement ever. During those 11 weeks, it will be open Wednesdays through Sundays, and feature the aforementioned Ferris wheel, a carousel, a massive beer garden, art installations, and a stage for live performances.

The beer garden will have a footprint of nearly 60,000 square feet, making it the largest outdoor beer garden in the city. Operated by MilkBoy, it will have multiple bars featuring 24 taps from local craft breweries and a rotating selection of pop-up menus crafted by local female chefs and chefs of color. It will also have oversize backyard games and a small performance stage with a line-up of free performances by local comedians, spoken-word poets and acoustic artists.

The Oval XP will bring activities, a beer garden, and a giant Ferris wheel to the Parkway this summer.

The ground mural is back, too. This year’s iteration is a 33,000-square-foot piece called Common Ground by artist Calo Rosa, known for colorful street art incorporating his Latin American roots. You an also expect plenty of live performances on the new stage. Though the Oval XP doesn’t open until June 16th, you can actually get an early glimpse at the Love From Philly Festival on June 11th, which will feature live music, movie screenings, a graffiti corner, and family-friendly activities.

Speaking of which, the Oval XP will have a whole space dedicated to kids. The Imagination Space will have a nine-hole miniature golf course, those big, blue foam blocks from Imagination Playground, ping-pong, giant Connect Four, and outdoor reading and music carts. It will also host free events like story times, arts and crafts, music lessons, and performances.

There’s not a schedule posted yet, but you can look forward to free events every day that the Oval is open, and keep an eye on their website for more info coming soon.