Just in time for Halloween. Here’s what you need to know. 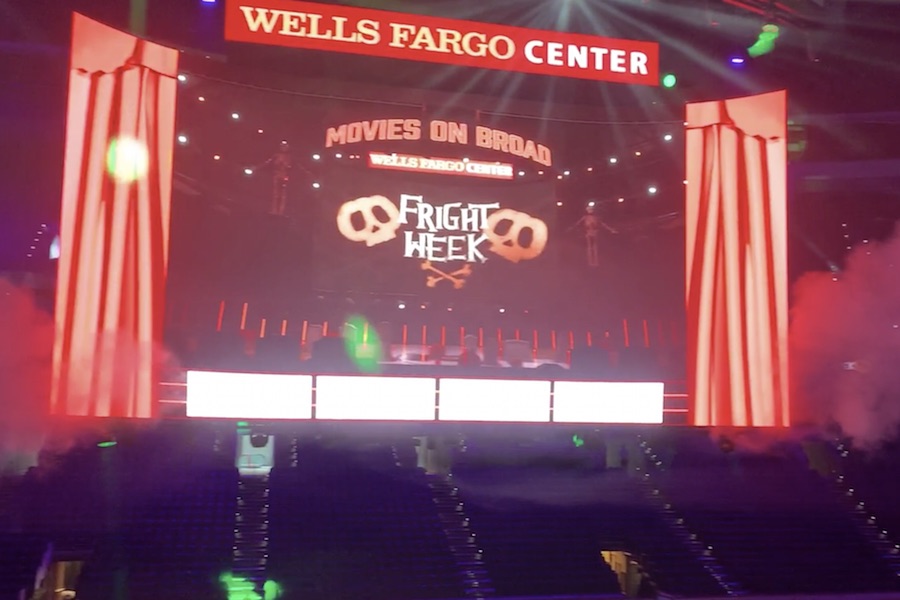 The Flyers and Sixers, who normally play in the Wells Fargo Center, aren’t playing these days. And Wells Fargo Center concerts that were supposed to happen in 2020 — names like My Chemical Romance, Harry Styles and Andrea Bocelli — have been pushed into 2021. Lord willing. So what’s a big old arena in South Philly to do? Become a movie theater, of course.

The Wells Fargo Center launches “Movies on Broad: Fright Week” on Wednesday with an Alfred Hitchcock double-feature of The Birds and Psycho.

The scary and Halloween movies continue through Sunday (now’s your chance to see Get Out on a big screen if you missed your opportunity before), with the movies showing on the Wells Fargo Center’s recently-installed center-hung scoreboard. It’s reportedly one of the largest center-hung 4K scoreboards in the country at 6,600 square feet, putting your neighbor’s 152-inch Panasonic to shame. To add to the experience, Wells Fargo Center is deploying fog machines, special lighting effects, and other things that your local AMC can’t pull off.

They’ve also thrown in the not-exactly-Halloween-y Back to the Future in honor of that film’s 35th anniversary. (Feeling old yet?)

Naturally, there are some pretty strict COVID measures in place. You can’t buy more than six tickets, and seats will be blocked off so that social distancing is observed. And you’ll need to remain masked at all times unless you’re eating or drinking.

A Wells Fargo Center representative tells Philly Mag that we can probably expect more from Movies on Broad in the future. Their hope is to do more themed weeks after the Halloween movies, including a sports movie week. Hmmmm, does anyone else see a full-day Rocky marathon in the future?

You can order tickets here.

Here’s a little video tour of the setup: