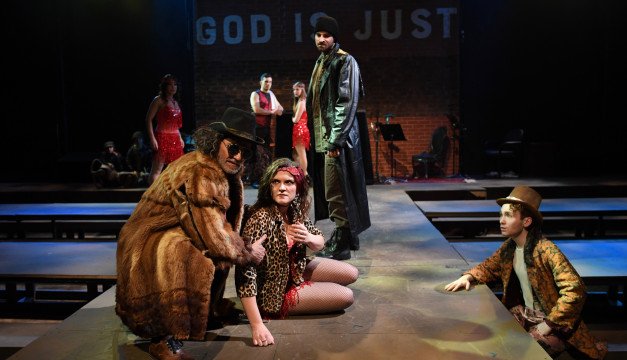 Count on Quintessence Theatre Group artistic director Alexander Burns to shake things up. When most of us think of Oliver!, Lionel Bart’s sappy musical adaptation of Dickens’ Oliver Twist, we imagine singing orphans and small portions—a 19thcentury cousin to Annie, minus the curly red wig.

But for Burns, it’s ripe for revision. His mounting is, according to his note, meant to be “a dystopian post-Brexit Oliver!.”

But first, a little background. In the days before Andrew Lloyd Webber, Oliver! was the longest-running British musical on Broadway, an unheard-of trajectory of success that also included a 1968 film version, which garnered six Oscars (including Best Picture).

I saw the movie in a rather grand theater—in Little Rock, Arkansas, of all places, where it could not have seemed more out-of-context. Frankly, I found it sneer-worthy. (Oliver! that is—not Little Rock. Although…)

Even as a child I recognized that Oliver!was a Reader’s Digest take on Dickens, simultaneously souped-up and dumbed-down (that exclamation point is a dead giveaway). Bart could write a catchy tune, but most of the lyrics are drivel, and hardly anything in the score feels connected in tone to the source material. Instead, a cloying sweetness permeated the movie. In the title role, angelic Mark Lester annoyed the shit out of me, and Jack Wild’s much-praised Artful Dodger seemed less like a bad boy than the defanged musical comedy simulacrum of one.

Clearly, Burns wants to put the fangs back in. I’m on board with that—in theory. The problem is that he keeps bumping into the show, which stubbornly refuses to be moved into darker or more interesting territory.

The end result is a hodgepodge of good and bad ideas. Much of the first act especially is very imaginatively staged and conceived. With part of the audience seated at tables, the action is immersive and highly energized.

But any sense of the “dystopian Brexit” idea disappears early on. Perhaps this is meant to be a darkly satirical Oliver!, but Burns keeps pushing satire into almost cartoonish excess. Several performances are over the top, most of all Wallace Acton (Fagin), who mugs incessantly and appears to be channeling Christopher Lloyd in Back to the Future, wig and all.

By the second act, the disconnect between Burns’ concept and the limitations of the musical itself becomes ludicrous. One minute, we’re immersed in a frighteningly realistic enactment of a man abusing his prostitute girlfriend; the next, we’re watching Keystone Cops-style shenanigans.

That abusive relationship—between Oliver!’s villain, Bill Sikes, and his girlfriend, Nancy (very well played here by Hanna Gaffney)—is handled so appallingly by Bart that it should effectively render the show unproduceable.

There is some good work here by a number of actors, especially Eleni Delopolous and Steven Wright, and as I say Burns has some imaginative ideas.

But it’s simply not enough. Famously, in the first scene, Oliver has the nerve to ask for more. In my case, I’ve had quite enough.