REVIEW: In Sweat, Reading, Pennsylvania Becomes a Microcosm of America

Both play and production are honorable but flawed, though signs are positive for the Philadelphia Theatre Company. 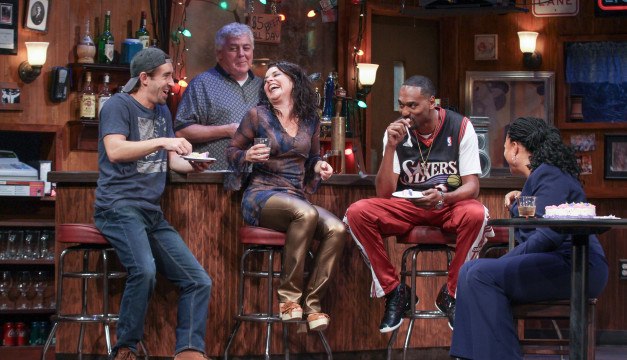 It was a chilly autumn night outside, but the Suzanne Roberts Theatre basked in a spring-like glow of hopeful renewal. Philadelphia Theatre Company is back, presenting a full season after a yearlong hiatus during which where there were a few engagements, as largely the company was reinventing itself.

Opening night showed promising signs of Producing Artistic Director Paige Price’s thoughtful stewardship. The play on tap, Lynn Nottage’s Sweat, seemed a perfect (indeed, almost inevitable) choice. Winner of the 2017 Pulitzer Prize for Drama, Sweat is exactly the kind of new American play which PTC has often brought to Philadelphia shortly after a Broadway run. The cast of nine featured a number of prominent local actors, but a director—Justin Emeka—new to the company.

Perhaps most meaningfully, Sweat is not only a local premiere—it’s also a show that’s local in content. Nottage’s play is set in Reading, Pennsylvania, moving back and forth seamlessly between 2000 and 2008. It’s a factory town in a period of decline, and we follow a group of interconnected citizens (including two families) who are particularly affected.

These folks work hard and play harder, mostly in a bar where alcohol loosens their tongues and their emotions. It’s a particularly American, often sad story—a depressed industry, the global financial crisis, and NAFTA create a perfect storm that will put many of these people out of work. Some people are luckier, or at least more resilient, than others. But the long-term prospects are bleak, and the resulting rage is deep and dangerous.

Sweat is the kind of earnest, issue-driven play that wins Pulitzers, and Nottage writes with craft and compassion. But the topics are, sadly, all too familiar from television, film, and several other plays, and there’s little here that feels truly new or revelatory. Sweat moves uneasily between journalism and melodrama, and the dialogue often sounds more like reportage and plot exposition than actual conversation.

Emeka’s production has similar peaks and valleys. It’s well staged and handsomely designed, produced with a level of scale and detail that recalls some of PTC’s early strengths. But much of the time, we’re aware we’re watching a performance—skillfully delivered, to be sure, but a performance, rather than a slice of real life. All the actors have their moments (it’s almost always the quiet scenes that pay off best), but Damien J. Wallace, J. Hernandez, and Walter DeShields most consistently feel like they’re really living in the play.

Still, even with reservations, there is much that is reassuring—not least in the palpable energy and abundant good will of the sold-out audience. On the basis of Sweat, PTC has not yet fully transformed itself into something new, but it’s back on solid ground, and there’s every reason to think it will continue to grow.