REVIEW: In Arthur Miller’s All My Sons, the Too-High Cost of Doing Business 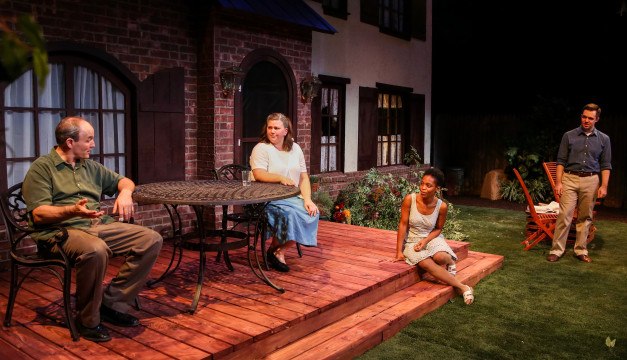 Paul Kuhn, Trice Baldwin, Nastassja Whitman, and Chase Byrd in All My Sons at Curio Theatre. (Photo by Rebecca Gudelunas)

I get a special kind of pleasure when a small theater, through dedication and imagination, succeeds with a play that stumps companies with larger resources. Similarly, I’m delighted when a work I’ve dismissed as largely bunk turns out to have more to say than I thought.

Philadelphia’s always-interesting Curio Theatre Company manages both in their riveting All My Sons, a problematic piece which they reinvigorate with a homerun production.

Yup, your gay, sports-phobic critic just used a baseball metaphor. Wouldn’t Arthur Miller be proud? The playwright liked nothing better than to take on Big American Ideas and male-dominated families, celebrating them even as he wagged his finger at their moral lapses.

Trust me: nobody, but nobody, wags his finger like Arthur Miller!

And nowhere more so than in All My Sons. His first successful play, it premiered in 1947, preceding the more famous Death of Salesman by two years while actually taking on many of the same ideas. In fact, I think All My Sons is most interesting when seen as a bookend of the later play. Here also is a family with two adult sons, dominated by a father and his business, which is not nearly as stable as it appears.

But although Death of a Salesman focuses on a work-life on the brink of catastrophe, life for All My Sons’ Keller family is comfortable. They suffer from a background tragedy: the presumed death of son Larry, reported missing in combat several years before, has certainly darkened the Keller’s world. Still, their affluence appears to be permanent.

It is, however, a life built on quicksand. A couple of years before, the patriarch, Joe, was accused of manufacturing and knowingly distributing faulty airplane parts, which resulted in the deaths of a number of war pilots. Joe was exonerated only by pointing the finger at his friend and business partner, Steve Deever, who now molders in a prison somewhere, even as the Deever daughter, Ann, is on the brink of marrying the Keller’s idealistic son, Chris.

Powerful stuff. Far too often, though, Miller’s sanctimonious ranting undercuts his genuinely important ideas. No point is made once if it can be made over and over. Early in the first act, the family matriarch, Kate Keller, says of her son Larry that, “I was just down the cellar, and what do I stumble over? His baseball glove. I haven’t seen it in a century.” In truth, she—and the rest of us—have already been stumbling through a theatrical landscape littered with heavy-handed metaphors and bloated dialogue. (Does anyone remember their mom saying, “Nobody in this house dast take her faith away”?)

But hallelujah!—this is exactly where Curio succeeds while others fail. Too often, directors and actors translate Miller’s turgid ideology into equally perfervid performances, piling on the melodrama, but director Gay Carducci is smarter than that. Instead, she and her cast take a deliberately low-key approach, emphasizing in the first act particularly the quiet pleasures of suburban life.

Initially, I was skeptical. Surely the group should seem less comfortable and more nervous? Only Kate, in a richly emotional performance by Trice Baldwin, betrays any inclination of what’s coming.

Which is why the second act take us by storm. And even here, Carducci and her excellent actors score points through quiet nuances, rather than grandiosity.

Paul Kuhn (as Joe Keller) is the quintessential quiet, nice man next door. Chase Byrd (as Chris) is touchingly open and likeable. There are also exceptionally good performances by Nastassja Whitman and Carlo Campbell as sister-and-brother Ann and George Deever. (In another smart, provocative touch, this production has the Deever family—who took the fall for Joe Keller—played by African American actors, which makes their sacrifice all the more poignant.)

Time and again, the Curio company breathes new life into All My Sons, which is also beautifully designed and presented. About one of Carducci’s choices, I have mixed feelings. The play is updated to the present, or at least given a look that suggests a mixed sense of period. I’ve always thought of All My Sons as a quintessential World War II story.

But the ambiguity gives this production its most breathtaking moment. When Joe is finally confronted with his duplicity, he explains himself with a single sentence, uttered here by Kuhn with sincerity and bemusement: “I’m in business, a man is in business.”

Watching this, I thought we are witnessing what may truly be America’s darkest hour. Curio leaves it to us to decide exactly when that is.

All My Sons plays through November 3. For more information, visit the Curio Theatre website.