Tom Stoppard hurls his cleverness like a javelin. But wouldn’t a truly smart play be about things that matter? 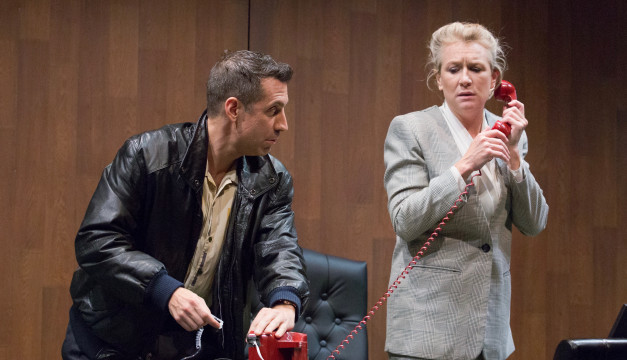 Tom Stoppard’s Hapgood is seldom produced, but I have seen it once before—nearly 30 years ago in Los Angeles. Alas, I have only the dimmest recollection of that production, limited really to two things: 1) Judy Davis was marvelous in the title role, as charismatic and commanding on stage as she is in films; and 2) I found the play itself opaque, even incomprehensible.

Happily, this time around, Hapgood was easier to follow. Have I’ve grown smarter in the last three decades? That would be nice, but it’s unlikely. Rather, I think the intimacy of the Lantern Theater space is a big help here. More importantly, director Peter DeLaurier’s fluid staging lays out the storytelling with remarkable clarity.

Still, to call Hapgood complicated would be an understatement. Set in London in 1989, it’s at least nominally a spy thriller (Brits pitted against Russians), where the title character (also known as “Mother”) is a bizarre split personality: tweedy soccer mom one minute, hard-as-nails intelligence agent the next. And of course, since this is Stoppard, that’s only the beginning. I’ll leave it at this: there will be double, triple, and quadruple crosses. There will be reversals and ironies. There will be twins and identity confusions. There will be physics.

DeLaurier makes sure that everything is illuminated. Rather too much so, in fact. In Act I especially, this Hapgood is a thrill-free thriller, with everything so forwardly placed and fully lit (literally and figuratively) that there’s scarcely any sense of danger or secrets. Where are the dark corners, the mystery, the nail-biting tension?

Things are on a surer footing in Act II, where the play also ventures into deeper waters (Hapgood is what I think of as one of Tom Stoppard’s “false front” plays—meaning that few things are what they initially appear to be). But frankly, I couldn’t bring myself to care.

Instead, I felt that Stoppard had dropped the ball. He’s so palpably invested in the nesting box intricacies of his multi-thread plot that the characters and moral dilemmas that should be the heart of the story fail to resonate. The actors here do reasonably well with the material. Christopher Patrick Mullen most effectively suggests the dark underbelly. David Pica does best with the moments of Monty Python-esque humor (yes, Hapgoodtraffics in that, too). Damon Bonetti gives the most completely realized performance across the whole spectrum. But no one feels fully dimensional—and the fault for that lies with the playwright.

Somewhere in the middle of the show, it hit me that what has happened in the 30 years since Hapgood that cruelly exposes its flaws is the arrival of The Americans. Yes, that’s a mere television series, and not the work of the man whom many hold up as the greatest living playwright in the English language. But that TV show takes up a very similar subject and invests it with all the moral complexity, ambiguity, and humanity that Stoppard’s play lacks.

Instead, in Hapgood, Tom Stoppard hurls his cleverness at us like a javelin. But wouldn’t a truly smart play be about people and situations that matter?