REVIEW: In Kill Move Paradise, We Shall Be Moved 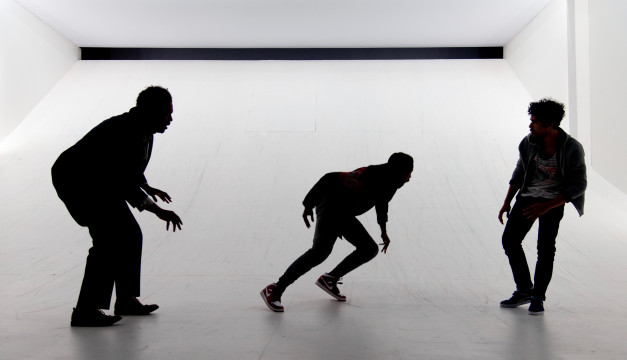 Last year at this time, the Wilma Theater played host to the O-Festival’s premiere production of We Shall Not Be Moved, a profound meditation on a grim chapter in modern Philadelphia history. The takeaway from the MOVE story is enraging and heartbreaking, yet somehow the opera gave us a sense of hope.

How fitting that this year the Wilma should open with James Ijames’ marvelous Kill Move Paradise, a play that similarly takes up a tragic chapter in our lives—the horrific pattern of black men and women killed, often by law enforcement officers, in circumstances that are never fully explained—and makes of it a deeply touching evening of theater.

Also fitting is that KMP, which was lavishly praised in its New York premiere a year ago, is here in the hands of director Blanka Zizka. In an interview in the show’s program, Ijames talks about appearing in Zizka’s Angels in America, a white-box production that helped inspire his thinking about his own yet-to-be-written play. I too was a great admirer of that Angels staging, and I’m delighted to say that Zizka’s work here, in a similarly open, brilliantly white space, is simply superb. It’s a production that is at once astonishingly simple and fabulously theatrical.

In short, this is a play and a staging that must be seen. 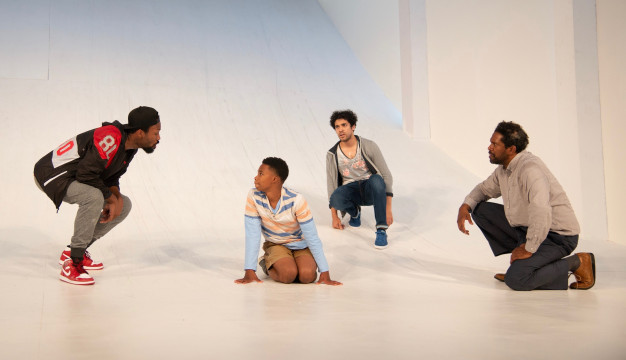 Kill Move Paradise is set in a kind of purgatory. More specifically, it’s a way station where four men, who are only just beginning to understand that they have left their earthly lives behind, await a plan for the future, passing the time in Waiting for Godotfashion. Isa (played by Lindsay Smiling) is, I would guess, the oldest, nattily turned out in a suit. The two others, Grif (Anthony Martinez-Briggs) and Daz (Brandon Pierce), are younger and hipper. A little later, they’re joined by Tiny (Avery Hannon), still a boy. Each registers as his own person, quite different from the others. It’s a sad fact that you won’t be surprised when I tell you the things they have in common are that 1) they are men of color, and 2) they have been killed violently and unexpectedly.

A grim set-up for sure, but Ijames and Zizka enliven the story with humanity, virtuosity, and considerable humor. Moments of poignant clowning may remind you, as I’ve said, of Beckett. A lump-in-the-throat passage in which each man recalls the last thing he remembers (for one, it’s his daughter in her crib; for another, the #28 bus; and for a third, his breakfast) recalls the gorgeous final scene of Thornton Wilder’s Our Town. Yet Ijames’ writing is vividly, singularly his own.

It’s not a perfect play. Occasionally, Ijames seems too inclined to please his audience. If any topic calls for open-ended rage, it’s this one, but there’s little of that here. The metaphor of Kill Move Paradise, in which the audience functions not only as spectators but as a kind of jury, isn’t fully realized. But it’s astonishing how much is packed into 75 minutes.

In nearly three decades of theatergoing in Philly, I’ve seen a lot of shows at the Wilma, and I don’t mind saying that my Zizkameter readings (positive to negative) have varied widely. But when Blanka is good, she’s very, very good—and Kill Move Paradise ranks (alongside that fabled Angels in America) near the very top. All four actors are splendid, as is the work of the design team (set by Matt Saunders, lighting by Thom Weaver, sound and music by Justin Ellington, costumes by LeVonne Lindsay).

Don’t delay in ordering your tickets—Kill Move Paradise is sure to sell out. More important, it has something profound and important to tell us. You shall be moved, I promise.