REVIEW: In Lay Me Down Softly, There’s No Knockout

Some fine acting enlivens Irish Heritage Theatre's production, but the show is punching above its weight. 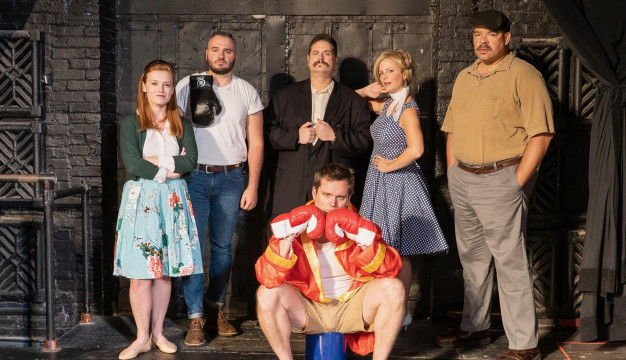 The cast of Lay Me Down Softly at Irish Heritage Theatre. (Photo by Dawn Brooks)

Man shall not live by soda bread alone, and the smart folks at Irish Heritage Theatre know this. That’s why, in addition to a core repertoire of canonical works by O’Casey and others—plays that tend to focus on hot-blooded men, their care-worn wives, and The Troubles—they also look further afield to more modern works and topics.

Sometimes this yields terrific results; at others, not so much. Up now is playwright Billy Roche’s Lay Me Down Softly, which alas in the latter category. Though Roche’s premise—the hard-scrabble life of amateur boxing, which here is part of a small-scale traveling show in Ireland in the 1960s—has promise, it proves insubstantial and (forgive me) lacks a knock-out punch.

Still, as with so much that this admirable company does, there are positive things here. Chief among them is a marvelous central performance by Brian Anthony Wilson as Peader, the quiet but powerful coach. Wilson is a magisterial actor who can command a stage without apparent effort. He’s at the top of his game here, generating an electric sense of presence and engagement.

Lay Me Down Softly really is Wilson’s show, and his performance is the primary reason to see it. But there’s other good work too, notably by the two female actors in this six-character ensemble. It’s a treat to see Kirsten Quinn, an asset to every show she does, in a feisty, sexy role. As always, she brings it home. (But note to the director/costumer – please ditch the Mrs. Claus wig and let Quinn’s radiant intelligence and beauty shine!) Katie Stahl does a lovely job with the secondary female lead, Emer, making her something more complex and interesting than the typical ingenue.

The other three actors—Dan McGlaughlin and Lee Stover as rival boxers, and Ethan Lipkin as the formidable ringmaster—also score their points (consistently strong acting is a hallmark of this company). But ultimately, Lay Me Down Softly lets them down.

I applaud what Roche is trying (at least, what I think he’s trying) to do: a mixed genre piece that marries the Irish tradition of lyrical works focused on character and storytelling, with a gritty, noir-ish realism. Here, in Peggy Mecham’s too-tame production, the more low-key conversational sections fare best, but the resulting amiable good humor drains the piece of any real suspense.

Lay Me Down Easy demands a harshness and brute force that doesn’t come across here. As they say in boxing, the show is punching above its weight.